Why @Occupy_Sussex Matters Beyond Sussex. I came and spoke at the occupation in the first week and I spoke about what Sussex meant to me – the community and intellectual freedom I found there as a student shaped me profoundly and I was pleased to discover that the true heart of Sussex continues to beat resolutely in defence of the principles of social justice that were always at its core. 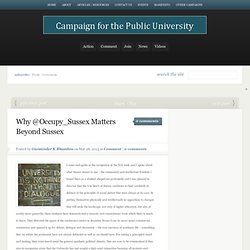 In putting themselves physically and intellectually in opposition to changes that will undo the landscape, not only of higher education, but also of society more generally, these students have demonstrated a tenacity and commitment from which there is much to learn. They liberated the space of the conference centre in Bramber House from its more usual commercial orientation and opened it up for debate, dialogue and discussion – the true currency of academic life – something that we within the profession have not always defended as well as we should have.

How have we got to here? TheBadgerNews : The official occupy swing #Mar25... Against a defensive lamentation for the University. In a recent critique of workfare, Aaron Peters connects its objective reality to the response of lamentation given by the TUC and the organised left. 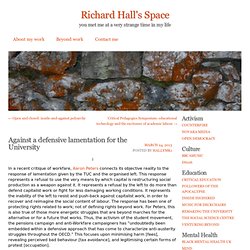 The response has been one of protecting rights related to work; not of defining rights beyond work. For Peters, this is also true of those more energetic struggles that are beyond marches for the alternative or for a future that works. Critically, Peters then asks the following. Weaponising workfare. The potential list of objectionable adjectives that have been extended to the medley of policies collectively understood as ‘workfare’ is, much like any credibility once invested in the present coalition government, indubitably nearing the point of expiry. 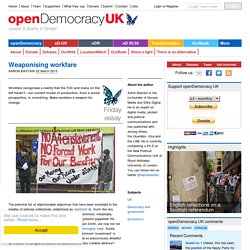 Indeed workfare, and its present puppeteer the Secretary of State for Work and Pensions Iain Duncan Smith, are now not not only regarded as mad, bad and malicious but also thoroughly inept. Surely even ‘IDS’ thought the numbers, the returns on government ‘investment’ in awarding these deals to A4E and others would not be so precociously dreadful as to place the programs beyond the parameters of any credible defence? The contribution of groups such as Boycott Workfare, DPAC and Solfed, among others, in discrediting workfare programmes is impressive. At the same time such a contribution has undoubtedly been embedded within a defensive approach that has come to characterize anti-austerity struggles throughout the OECD. Gabrielquotes : To get @SussexUni contract,... How does privatisation affect me? 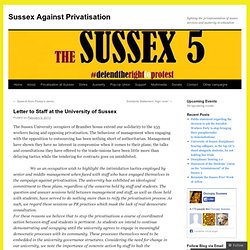 The behaviour of management when engaging with the opposition to outsourcing has been nothing short of authoritarian. Management have shown they have no interest in compromise when it comes to their plans; the talks and consultations they have offered to the trade-unions have been little more than delaying tactics while the tendering for contracts goes on uninhibited. We as an occupation wish to highlight the intimidation tactics employed by senior and middle management when faced with staff who have engaged themselves in the campaign against privatisation. Students occupy Sussex University in protest against service sell-off - News - Student. The initial peaceful protest on Thursday 7 February, organised by the University of Sussex Students’ Union, attracted over 300 students, who then followed a pre-planned route around campus, which ended at Bramber House. 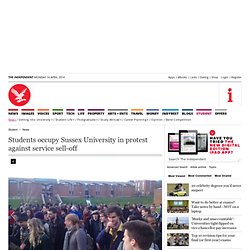 It was here that a group of students broke away from the official protest and occupied the conference room where an external talk was taking place. A statement from the Occupy Sussex group claims that the conference delegates: “gave the students a platform to speak [and] endorsed both [their] cause and method”. Click here to watch a video and see pictures of the protests As the afternoon progressed, the students moved to the third floor of the building where they revealed a large banner calling for a halt to the privatisation process.

Michael Segalov, the press contact for the occupiers, praised the university’s own security staff, but expressed concern at the presence of dog handlers on campus, which have allegedly been contracted in. Aaronjohnpeters : Luxury flats, shopping, corporate... Amcgettigan : @alicebell @DawnHFoster UCL... In-pictures-and-video-sussex-university-occupied-by-cuts-protestors-8487613. As-the-sussex-uni-occupation-shows-government-may-see-education-as-a-market-but-students-do-not-8488719. ‘They’ refers to the university management and their decision to privatise 235 jobs including services such as catering, cleaning, security and porters. 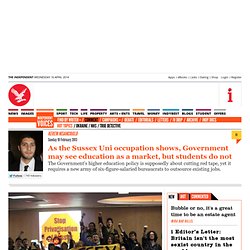 For students, the most immediate worry is that their wellbeing will be compromised by unaccountable private companies whose primary motive is profit. For the 235 workers, private tendering breeds suspicion that job security, pay, pensions, conditions and terms will be put under threat once outsourced. If precedents of outsourcing at universities are any indication, such fears may well be justified. Sussex-student-protest-gathers-momentum-as-peter-capaldi-caroline-lucas-and-tariq-ali-offer-support-8490572. Caroline Lucas MP, activist Tariq Ali, and BAFTA and Academy award winning actor and director Peter Capaldi, best known for his role in the BBC’s ‘The Thick of It’, are among those offering their backing to the occupation which is now into its fourth day. 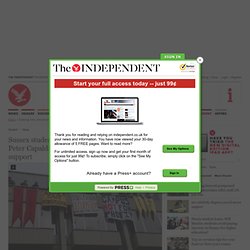 Amid reports of rising tensions between students and security, the protesters have shown no sign of withdrawing from the Bramber House conference room and third floor balcony, which they have held since Thursday 7 February. Sussex occupation follows outsourcing protest. Sussex sit-in gathers celebrity support. Kelly McBride (Kelly_McB) sur Twitter. University of Sussex Students' Union. There is a long and successful history of protest at the University of Sussex. 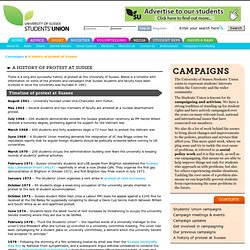 Below is a timeline with information on some of the protests and campaigns that Sussex students and faculty have been involved in since the University was founded in 1961. Timeline of protest at Sussex August 1961 – University founded under Vice-Chancellor John Fulton. May 1963 – Several students and two members of faculty are arrested at a nuclear disarmament protest. July 1966 – 200 students demonstrate outside the Sussex graduation ceremony as PM Harold Wilson receives a honorary degree, protesting against his support for the Vietnam war.

March 1968 – 600 students and forty academics begin a 72-hour fast to protest the Vietnam war. June 1968 – A Students’ Union meeting demands the resignation of VC Asa Briggs unless he repudiates reports that he argued foreign students should be politically screened before coming to UK universities. January 1986 – Sussex staff join a national strike over job cuts. Joncstone : This is what @occupy_sussex... 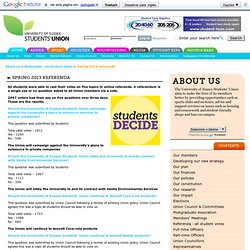 A referendum is a single yes or no question asked to all Union members via a vote. 2097 voters had their say on five questions over three days. NewsHit: Why Strike?

Occupy_sussex : Currently joined by Goncalo... Occupy_sussex : The march makes movement :)... OwenJones84 : Here are the inspiring... JosephKay76 : Flares, banner drops, and the... So much for the university's statute of freedom of speech. Ucu : 'So much for the university's satus of freedom of speech... More censorship concerns at University of Sussex.

Website URL : 4 March 2013 Questions about academic freedom at the University of Sussex continue to be asked as a bitter row about outsourcing jobs and services shows little sign of abating. 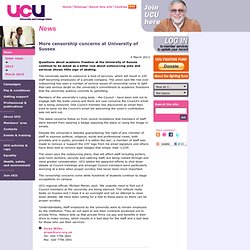 The university wants to outsource a host of services, which will result in 235 staff becoming employees of a private company. The union said the row over outsourcing has seen a number of serious issues of censorship come to light that cast serious doubt on the university's commitment to academic freedoms that the university publicly commits to upholding. Occupy sussex communique. Undersided : PLEASE RT THIS COMMUNIQUE:... Sanjeedah : Amazing turnout at the #SussexUni...

Anti-privatisation struggle gathers momentum at Sussex Uni. Demo today (Thurs 28th Feb): 'the big one' | 1pm Library Square | Bring workmates, friends, and yellow squares. The long-running struggle against the outsourcing of 235 jobs at the University of Sussex has been gathering momentum. The plans were first announced in May 2012, prompting demonstrations and mass meetings by staff and student supporters.

When students stormed the Bramber House conference centre on Thursday 7th February, it probably wasn't that out of the ordinary, given Sussex's traditions of student activism. Management brought in private security to seal off the entrances (the in-house security are among those being outsourced), and turned off the heating. Students were forced to winch food and water in from a third floor balcony, and spend the nights in near-freezing temperatures. Speakers have included a range of leftist notables from Caroline Lucas MP, Mark Steel, Owen Jones and Laurie Penny, with a Skype appearance from Noam Chomsky promised.

JosephKay76 : Speech from the steps of the... KeremBrulee : Sussex students have just... Sussex Against Privatization. BSMS second occupation statement We, 200 students and staff of this university, have occupied the Michael Chowen lecture theatre. This action is a response to a lack of alternatives within the current situation. Management still refuse to engage with our demands even as they attempt to placate us by feigning negotiation. So we reiterate that we will not compromise, and state them again: An immediate end to the privatisation processAn immediate end to management intimidation and attempts to stifle dissentThe establishing of a means for us to hold management to account But in being here, as with the occupation of Bramber House, we go beyond those demands. Michael Farthing and VCEG are hated across campus: the Student’s Union has not one, but two current votes of no confidence in the Vice Chancellor.

We are here as students and staff to deny management the power to manage our university. Occupy Sussex grow despite 'done deal' privatisation - SQ Magazine. Email The ‘Occupy Sussex’ movement continues to grow and gain support as the saga between privatisation and solidarity for the 235 rolls on into its 3rd week. Thursday saw their latest signal of intent, with 200 Sussex university students occupying a 2nd building on campus, the Brighton and Sussex Medical School Lecture Theatre.

A temporary “Flash demo” shortly followed in the Jubilee lecture theatre, with hundreds turning up in an effort to further disrupt management’s control over campus. We call on all staff and students to join us. To reclaim the spaces of our campus. This is the Jubilee lecture theatre @occupy_sussex twitter.com/sanjeedah/stat…— Sanj (@sanjeedah) February 28, 2013 Occupy Sussex issued a statement via their Facebook page: “We have taken this space temporarily as a portent of things to come.

Sussex Against Privatisation - The big one! Sodexo. Sodexo (formerly Sodexho Alliance) is a French food services and facilities management multinational corporation headquartered in the Paris suburb of Issy-les-Moulineaux, France.[2] Sodexo is one of the largest companies in the world in its business, with 380,000 employees, representing 130 nationalities, present on 34,000 sites in 80 countries. For fiscal year 2010 (ending August 2009) revenues reached 15.3 billion euros, with a market capitalization of 6.5 billion euros.

Students Rally in Unity as Board Meets in Secret. Canribm : Prospective students and parents... Stop the marketisation of our universities. Thinktyler : This is what you first see... Youtube: PROPERGANDA.

Twitter's. Media about. THE: Sussex students step down from senate. Management would not listen to alternative views, duo state Source: Alamy Only a mask: many at Sussex see scrutiny as a rubber-stamp exercise Two undergraduate members of the University of Sussex’s senate have resigned amid continuing controversy over senior management’s engagement with staff and students. The pair, joined by one union observer, resigned on 14 June from the body responsible for overseeing and approving academic matters at the university.

Lyndsay Burtonshaw and Ross Davidson, two of three undergraduate faculty representatives, said they resigned because they felt redundant in their roles and because of a perceived lack of consultation by senior management, in particular over the outsourcing of 235 estates and catering jobs. “I’ve not been able to be effective in representing views that oppose the privatisation because management has been so oblique to any sort of opinion that opposes the privatisation agenda,” Ms Burtonshaw told Times Higher Education. University of Sussex bosses treated to the opera, international rugby and Microsoft tablets by firms. The Vice Chancellor Must Resign Immediately. The University of Sussex, under the supposed leadership of Michael Farthing, has overseen a series of events that lead us to believe that the Vice Chancellor is not fit for purpose, and as such must resign immediately.

The Vindication of the Sussex Five: When Will the Vice-Chancellor Resign?