Occupy Central 2.0 is the ambition to take the civilian mouvement to another level online: Social Media can become Political Media 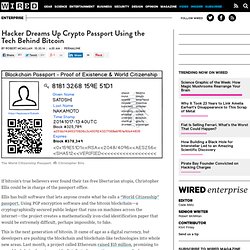 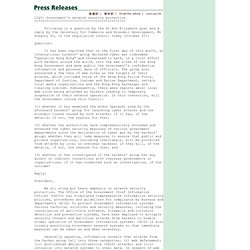 The growing risk of cyber-hacking. After cyber attacks breach Occupy protesters’ phones and Anonymous brings down government websites, Anna Cummins explores the real implications of always being connected __ Whether you’re checking your bank balance, reading a map, ordering food or looking for a date – it’s likely you’ve done it on the internet. 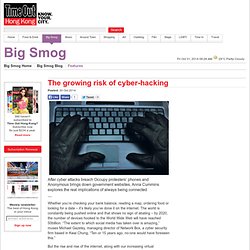 The world is constantly being pushed online and that shows no sign of abating – by 2020, the number of devices hooked to the World Wide Web will have reached 50billion. The growing risk of cyber-hacking. Capitalism Explained. This Is So Accurate It Hurts. Go (game) Go originated in ancient China. Occupy Central - the "Umbrella Revolution" - Alfred Chan Photography. The Hong Kong government must listen to its people. It is not wholly true to say that the eyes of the entire world are on Hong Kong. 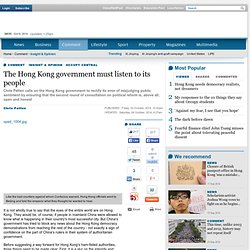 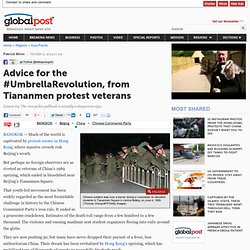 BANGKOK — Much of the world is captivated by protest scenes in Hong Kong, where massive crowds risk Beijing’s wrath. But perhaps no foreign observers are as riveted as veterans of China’s 1989 uprising, which ended in bloodshed near Beijing’s Tiananmen Square. That youth-led movement has been widely regarded as the most formidable challenge in history to the Chinese Communist Party’s iron rule. 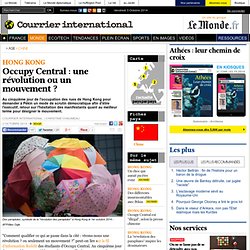 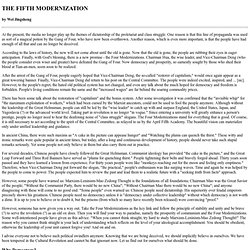 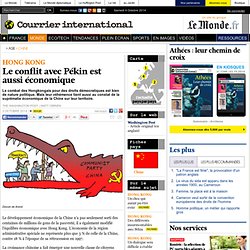 Mais leur véhémence tient aussi au constat de la suprématie économique de la Chine sur leur territoire. Turns Out China IS Lying About Everything. In what may come as a shocking surprise to exactly nobody, the next great discovery as more and more layers of the global ponzi onion are exposed, is that China was, in fact, lying about everything. 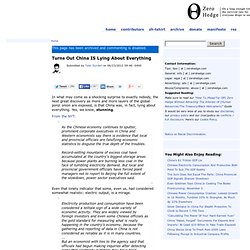 Yes, we know, stunning. From the NYT: As the Chinese economy continues to sputter, prominent corporate executives in China and Western economists say there is evidence that local and provincial officials are falsifying economic statistics to disguise the true depth of the troubles. Politics. The Guardian view on the Hong Kong protests: time for a global response. Hopes that a compromise might be possible between protesters in Hong Kong and the Chinese communist authorities appear as uncertain as ever, after chief executive CY Leung rejected demands that he resign on Thursday. 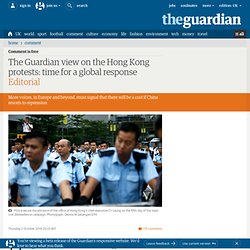 While Mr Leung offered talks between his government and the demonstrators, the impression was that the authorities were playing for time. Local security forces seemed to be readying for a confrontation, while protesters debated what their next steps might be. Never, since the beginning of the upheaval, have international calls for restraint and dialogue on part of the Chinese authorities been so necessary. Hong Kongese : Please help Hong Kong. Beijing's problem in Hong Kong is not foreign interference but Western ideas. 國際特赦組織香港分會 Amnesty International Hong Kong – Open Letter to Chief Executive Mr.Chun Ying Leung. Hong Kong Fighting Hong Kong: An On-The-Ground Account Of Occupy Central.

A dispatch from Hong Kong, where life – parties, business — continues as usual… with one high-profile exception. It’s Day 8 of Occupy Central, or Umbrella Revolution, if you will. A few nights ago I was enjoying a nice steak dinner at La Vache! In the heart of Soho district when the conversation steered itself to the events happening only a few blocks away. As the wine flowed, so did the opinions of the dinner guests. In case you haven’t heard, tensions are high here in Hong Kong. Hong Kong police deny using triads to disrupt protests - video. Hong Kong – betrayed by China. And abandoned by the British. One of the most profoundly disappointing responses to the events in Hong Kong has been Britain’s silence – or its weak words that have sometimes been worse than silence.

At the very least, Britain should act honourably: it has a moral and legal responsibility to Hong Kong. It did after all sign a treaty, back in 1984, that guaranteed Hong Kong’s core values and way of life, including freedom of speech and assembly, until 2047. The truth is that money talks. Talk to British business people and their first instinct is to keep their heads low; they just want things to carry on as before, would like the protests to disappear, and maintain good relations with China. In Hong Kong’s protests, technology is a battlefield - Quartz. It was an image that fascinated the world—a sea of lights coming from thousands of Hong Kong protesters waving their lit up mobile phones in the darkness.

That’s what you get from a city that averages more than two mobile phones per person. Occupy Central, aka the Umbrella Revolution, may be the most high-tech protest ever, using wireless broadband, multimedia smartphones, drone film making, mobile video projectors, and live streaming video to communicate and to broadcast their cause to the entire world in real time. The victor in this conflict will be determined by who holds the streets, and who rules the digital space. This dynamic has energized an unprecedented public relations offensive that tech savvy protestors have used to creative ends. The next 36 hours could determine the future of Hong Kong – Quartz. HONG KONG—The city’s top official, chief executive Leung Chun-ying, issued an ultimatum today to the protesters who have taken over three neighborhoods in the city: Clear the roads and a stronghold in front of the government’s headquarters by early morning on Monday, Oct. 6, or he will “take all necessary actions to restore social order.”

WATCH: Hong Kong Student Leader Joshua Wong Talks Protest Aims. 6 Questions You Might Have About Hong Kong’s Umbrella Revolution. Internet activism. Types[edit] Occupy central. Toddlers, Cyber-Attacks, and Asymmetric Warfare. CATEGORIES: en, en, Industrial Security In the information security space, you often hear about asymmetric warfare and how cyber-attacks are a weapon of choice for some combatants, yet, it’s not clear to everyone what all of this actually means. I shall endeavor to educate you on the very basics of this topic over the next few pages. Chi Ho Yeung - Photos from Chi Ho Yeung's post in Tai Po 大埔. Beijing to take a more active role in Hong Kong's affairs, hints Xi Jinping.