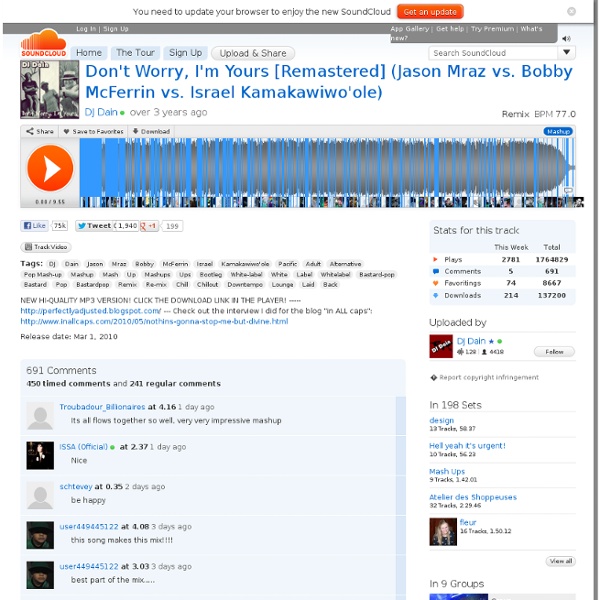 The Lady and The Reaper An old lady is nearing the end of her days and she longs to be with the husband she has lost. So, when death pays her a visit on night in the form of a rather comical Grim Reaper then she touches his extended hand without fear. Only, she has not considered that a meddlling doctor on our side of the great divide will decide that she must be resuscitated . 10 things science (and Buddhism) says will make you happy I’m a science geek as well as a Buddhist geek, and recently when I was leading a retreat on how to bring more joy into our lives I found myself making a lot of references to an article published in Yes magazine, which touched on ten things that have been shown by science to make us happier. It seemed natural to draw upon the article because so much of the research that was described resonated with Buddhist teachings. So I thought it would be interesting to take the main points of the article and flesh them out with a little Buddhism. 1.

Top Work Out Song Ideas to Get Fit to! We’ve compiled our favourite list of “Great Workout Songs” to get you pumped and ripped in no time time at all. One of these songs will replace 4 hours on a Ab swing! Whether you need some motivation at the gym, whilst your running or lifting a few milk bottles full of water on a broome stick at home – here are some songs to get you excited! Who knows you could even get super buff with just one of these tracks! – on repeat of course. Enjoy and make sure to let us know more song ideas in the comments section at the bottom of the page.

What is causing the waves in California to glow? It looks like something from the movie "Avatar": ocean waters that light up like neon glow sticks when they splash. Beaches across southern California have recently been alight with eerie, glowing waves. What could be causing such an otherworldly phenomenon? A recent report by Discovery News has provided an answer. According to marine biologist Jorge Ribas, the glowing is caused by a massive red tide, or algae bloom, of bioluminescent phytoplankton called Lingulodinium polyedrum.

What Female Disney Characters Might Look Like in Real Life Mar 17, 2012 Jirka Väätäinen is a Finnish designer and photographer currently studying graphic design at the Art University College at Bournemouth. His series on Behance titled Envisioning Disney Characters in “Real Life” is one of the most ‘appreciated’ (think of it as a Like on Facebook) projects of all time on Behance with 14,528 thumbs up at the time of this posting. Jirka has a really impressive portfolio of work not only on Behance, but on his personal blog as well. Jirka has tremendous talent and the Sifter looks forward to inspiring work from this artist for many years to come :) Below are 15 famous Disney female characters and what they might look like in real life.

Къщата на хобитите в Уелс - StumbleUpon URGENT: Computer Backup Required Matt Folson - Microsoft Specialist Your computer has become slow, unresponsive, displaying errors, or has started experiencing other issues. These issues are often caused by Viruses, Malware, or improper maintenance of your system. Malware and Viruses can cause program lock-ups and crashes, unwanted pop-ups and ads, slow PC performance, system freezes, start-up and shutdown problems, error messages, and total system failure. To ensure your personal and financial information is not destroyed by Malware, Viruses, or other issues, it is highly recommended that you run a free PC backup program to save and protect your system.

10 Bizarre Green Ideas! « Epic Swag If you waste too much water, you might end up killing your pet! The water level restores to normal when the tap is off. Even though designer Yan Lu received a letter from PETA saying “environmental education does not require cruelty to animals”, yet an emotional way to persuade consumers to think about saving water will always work. (Link) When this concept of printer by Hoyoung Lee becomes a reality, you’ll never need to buy an ink cartridge or join those pencil stubs to make a longer pencil.