ANCYL must support economic freedom campaign: Ramaphosa:Wednesday 30 September 2015. Cyril Ramaphosa says the Freedom Charter is a vision of a new society that should focus on alleviating poverty and unemployment. 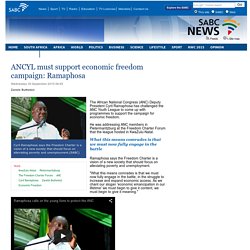 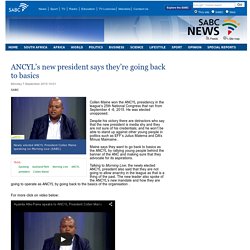 He was elected unopposed. Despite his victory there are detractors who say that the new president is media shy and they are not sure of his credentials; and he won’t be able to stand up against other young people in politics such as EFF’s Julius Malema and DA’s Mmusi Maimaine . Maine says they want to go back to basics as the ANCYL by rallying young people behind the banner of the ANC and making sure that they advocate for its aspirations. Talking to Morning Live; the newly elected ANCYL president also said that they are not going to allow anarchy in the league as that is a thing of the past. For more click on video below: Related articles: ANCYL Elections, by sabcnewsonline. ANCYL vows to work towards strengthening youth structures globally:Monday 7 September 2015. ANCYL members who took party to court face expulsion:Sunday 6 September 2015. 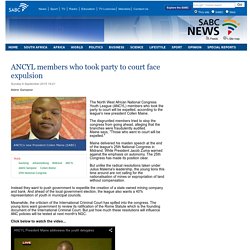 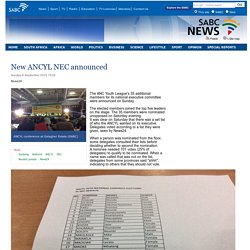 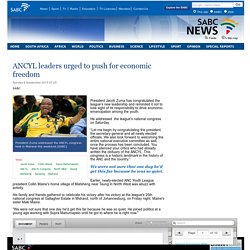 (SABC) President Jacob Zuma has congratulated the league's new leadership and reminded it not to lose sight of its responsibility to drive economic emancipation among the youth. He addressed the league's national congress on Saturday. “Let me begin by congratulating the president, the secretary general and all newly elected officials. We also look forward to welcoming the entire national executive committee as well, once the process has been concluded. We were not sure that one day he'd get this far because he was so quiet.

Earlier, newly-elected ANC Youth League president Collin Maine's home village of Matsheng near Taung in North West was abuzz with activity. His family and friends gathered to celebrate his victory after his victory at the league's 25th national congress at Gallagher Estate in Midrand, north of Johannesburg, on Friday night. "We were not sure that one day he'd get this far because he was so quiet. KZN new ANC Youth League leadership speaks against factionalism :Thursday 11 June 2015. ANC Provincial Secretary Sihle Zikalala (SABC) The newly-elected ANC Youth League leadership in KwaZulu-Natal has called on members to fight factionalism. 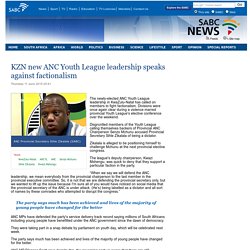 Divisions were once again clear during a violence marred provincial Youth League's elective conference over the weekend. Disgruntled members of the Youth League calling themselves backers of Provincial ANC Chairperson Senzo Mchunu accused Provincial Secretary Sihle Zikalala of being a dictator. Zikalala is alleged to be positioning himself to challenge Mchunu at the next provincial elective congress. ANC Youth League to elect its leadership:Tuesday 25 August 2015.

The ANCYL will finally hold its national elective congress from September 4-6 after numerous delays. 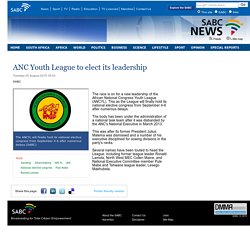 (SABC) The race is on for a new leadership of the African National Congress Youth League (ANCYL). This as the League will finally hold its national elective congress from September 4-6 after numerous delays. The body has been under the administration of a national task team after it was disbanded by the ANC's National Executive in March 2013. This was after its former President Julius Malema was dismissed and a number of his executive disciplined for sowing divisions in the party's ranks. Several names have been touted to head the League, including former league leader Ronald Lamola, North West MEC Collen Maine, and National Executive Committee member Pule Mabe and Tshwane league leader, Lesego Makhubela. ANCYL elects Collen Maine as president:Saturday 5 September 2015.

A relatively unknown , Collen Maine, has beaten the tried and tested. 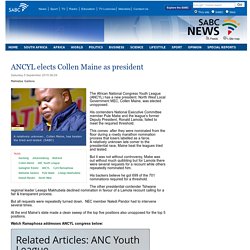 (SABC) The African National Congress Youth League (ANCYL) has a new president. North West Local Government MEC, Collen Maine, was elected unopposed. His contenders National Executive Committee member Pule Mabe and the league's former Deputy President, Ronald Lamola, failed to meet the required threshold. This comes after they were nominated from the floor during a rowdy marathon nomination process that losers labelled as a farce. But it was not without controversy, Mabe was out without much quibbling but for Lamola there were several requests for a recount while others repeatedly nominated him. His backers believe he got 699 of the 701 nominations required for a threshold. The other presidential contender Tshwane regional leader Lesego Makhubela declined nomination in favour of a Lamola recount calling for a fair & transparent process. But all requests were repeatedly turned down. Court orders ANCYL to re-run elective conference:Friday 12 June 2015.

The ANC Youth League in Limpopo has to re-run their elective conference as ruled by the High Court in Pretoria. 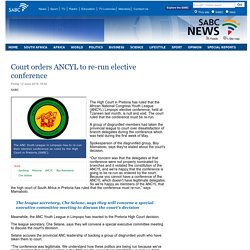 (SABC) The High Court in Pretoria has ruled that the African National Congress Youth League (ANCYL) Limpopo elective conference, held at Tzaneen last month, is null and void. The court ruled that the conference must be re-run. A group of disgruntled members had taken the provincial league to court over dissatisfaction of branch delegates during the conference which was held during the first week of May. Spokesperson of the disgruntled group, Boy Mamabolo, says they're elated about the court's decision.