Rabbit, Hare and Squirrel Recipes - Recipes for Rabbits and Hares. Photo by Holly A. 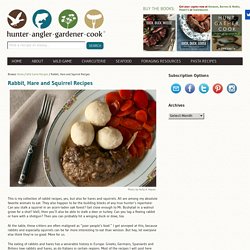 Heyser This is my collection of rabbit recipes, yes, but also for hares and squirrels. All are among my absolute favorite animals to eat. They also happen to be the building blocks of any true hunter’s repertoire: Can you stalk a squirrel in an acorn-laden oak forest? Get close enough to Mr. Here's How To Tie Anything And Everything. How to Build a Trap: 15 Best Survival Traps. How To Disappear In The Wilderness: A Natural Camouflage Tutorial – I’ve been wanting to write this post for quite some time now but have been putting it off because it involves a certain level of commitment. 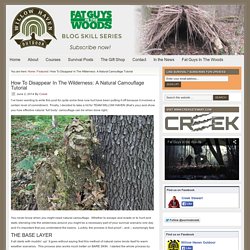 Finally, I decided to take a hit for TEAM WILLOW HAVEN (that’s you) and show you how effective natural ‘full body’ camouflage can be when done right. Snares And Traps. Disclaimer: Traps are presented for information purposes only, they are dangerous, some lethally so. 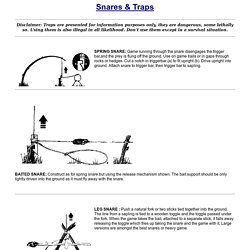 Using them is also illegal in all likelihood. Don't use them except in a survival situation. SPRING SNARE: Game running through the snare disengages the trigger bar,and the prey is flung off the ground. How to build a tin can waveguide antenna. Assemble the probe and mount in can Now you'll need that bit of wire. 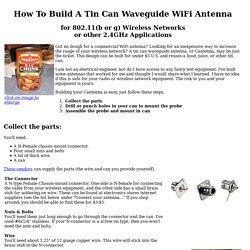 You'll need a soldering iron or a friend with one as well. Cut the wire so that when it is stuck in the connector as shown, the total length of both the brass tube and wire sticking out past the connector is 1.21". College and High School Football, Basketball, Recruiting, NFL, and MLB Front Page. Kentucky Hunting Forums. Squirrel Bot Flies: Fact Versus Fiction. Hunters sometimes harvest squirrels early in the hunting season that appear to be covered in tumors or lumps. 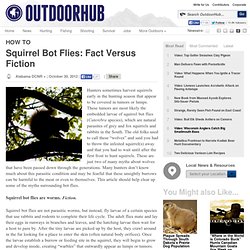 These tumors are most likely the embedded larvae of squirrel bot flies (Cuterebra species), which are natural parasites of grey and fox squirrels and rabbits in the South. The old folks used to call these “wolves” and said you had to throw the infested squirrel(s) away and that you had to wait until after the first frost to hunt squirrels. These are just two of many myths about wolves that have been passed down through the generations. Many hunters don’t know much about this parasitic condition and may be fearful that these unsightly burrows can be harmful to the meat or even to themselves. This article should help clear up some of the myths surrounding bot flies. Squirrel bot flies are worms.

Squirrel bot flies are not parasitic worms, but instead, fly larvae of a certain species that use rabbits and rodents to complete their life cycle. Fw.ky.gov/Hunt/Documents/basichuntingbooklet.pdf. Dept of Fish and Wildlife Online Hunting and Fishing License and Permit Sales. Welcome Welcome to the Kentucky Department of Fish and Wildlife Resources Online License and Permit Agent site. 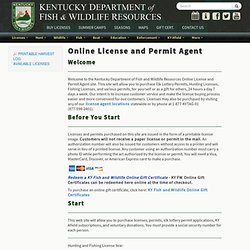 This site will allow you to purchase Elk Lottery Permits, Hunting Licenses, Fishing Licenses, and various permits, for yourself or as a gift for others, 24 hours a day 7 days a week. Our intent is to increase customer service and make the license buying process easier and more convenient for our customers. Licenses may also be purchased by visiting any of our license agent locations statewide or by phone at 1-877-KYTAG-01 (877-598-2401). Before You Start Licenses and permits purchased on this site are issued in the form of a printable license image.

Www.in.gov/dnr/fishwild/files/fw-hunting_trapping_seasons.pdf. License Fees. All annual licenses and stamp privileges are valid from April 1 of the current year through March 31 of the following year. 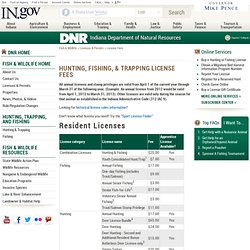 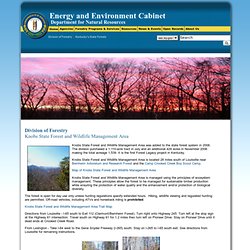 The division purchased a 1,110-acre tract in July and an additional 429 acres in November 2006 making the total acreage 1,539. It is the first Forest Legacy project in Kentucky. Knobs State Forest and Wildlife Management Area is located 28 miles south of Louisville near Bernheim Arboretum and Research Forest and the Camp Crooked Creek Boy Scout Camp.

Map of Knobs State Forest and Wildlife Management Area. Welcome to Paracord Planet - With over 300 Colors of 550 paracord, 425 paracord, nanocord, and thousands of paracord accessories, Paracord Planet has all your paracord and paracord accessories to complete any project! Hunting, Fishing, Survival, Guns, Gear. Duck Dynasty's Phil Robertson Gives Drew Magary a Tour. Let’s start with the crossbow, because the crossbow is huge. 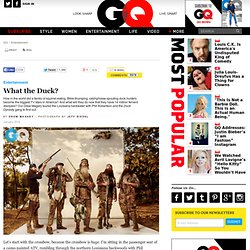 I’m sitting in the passenger seat of a camo-painted ATV, rumbling through the northern Louisiana backwoods with Phil Robertson, founder of the Duck Commander company, patriarch at the heart of A&E’s smash reality hit Duck Dynasty, and my tour guide for the afternoon. There are seat belts in this ATV, but it doesn’t look like they’ve ever been used. Phil is not wearing one. Spring.