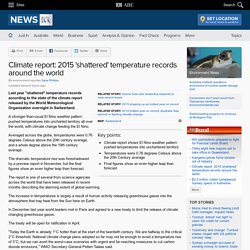 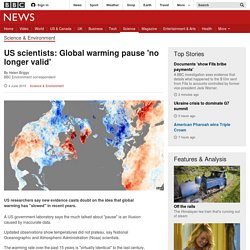 A US government laboratory says the much talked about "pause" is an illusion caused by inaccurate data. Updated observations show temperatures did not plateau, say National Oceanographic and Atmospheric Administration (Noaa) scientists. The good-news El Niño story for Western Australia's oceans. While eastern Australia trembles at the impending El Niño this year, potentially increasing heat waves and bushfires, the coastal waters of Western Australia (WA) would find El Niño a welcome relief from the heat. 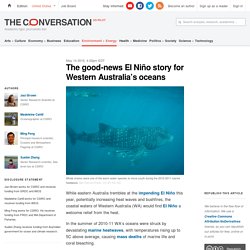 In the summer of 2010-11 WA’s oceans were struck by devastating marine heatwaves, with temperatures rising up to 5C above average, causing mass deaths of marine life and coral bleaching. Temperatures have remained warm since, due to the lingering effects of the large 2010-11 La Niña. What is the 'warm blob' in the Pacific and what can it tell us about our future climate?

People living across the US have lived through some odd weather in the past year. 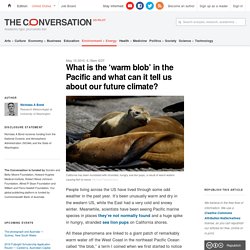 It’s been unusually warm and dry in the western US, while the East had a very cold and snowy winter. Meanwhile, scientists have been seeing Pacific marine species in places they’re not normally found and a huge spike in hungry, stranded sea lion pups on California shores. How climate change is making California's epic drought worse. California is undergoing a record-setting drought that began in 2012, the worst in at least 1,200 years. 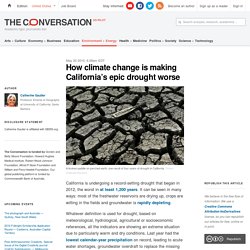 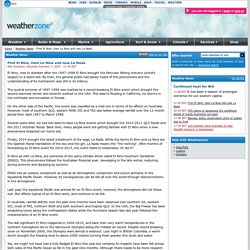 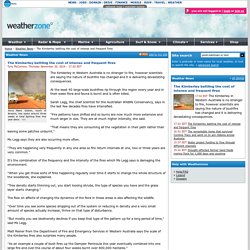 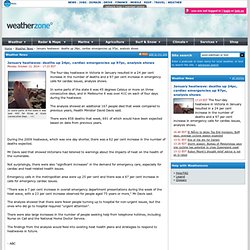 In some parts of the state it was 45 degrees Celsius or more on three consecutive days, and in Melbourne it was over 41C on each of four days during the heatwave. The analysis showed an additional 167 people died that week compared to previous years, Health Minister David Davis said. There were 858 deaths that week, 691 of which would have been expected based on data from previous years.

During the 2009 heatwave, which was one day shorter, there was a 62 per cent increase in the number of deaths expected. More breaking news ABC News Sydney Morning Herald National Nine News News Limited. In Australia, 2013 Was a Scorcher for the Record Books. The numbers are in and Australia just finished it’s hottest year since recordkeeping began in 1910. 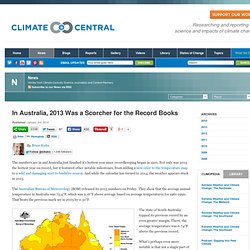 Not only was 2013 the hottest year on record, but it featured other notable milestones, from adding a new color to the temperature map to a wild and damaging start to bushfire season. And while the calendar has turned to 2014, the weather appears stuck in 2013. The Australian Bureau of Meteorology (BOM) released its 2013 numbers on Friday. They show that the average annual temperature in Australia was 73.4°F, which was 2.16°F above average based on average temperatures for 1961-1990.

Bureau warned Greg Hunt about climate change before he cited Wikipedia. Bushfires and climate change A severe fire season can now safely be attributed in part to climate change, agree Labor's Pat Conroy and Liberal Andrew Laming, but not individual fires. 7, 2014 Environment Minister Greg Hunt was given a thorough briefing about the effects of climate change on Australia's weather patterns three weeks before he told a BBC radio interview he had sourced information on bushfires and global warming from Wikipedia. 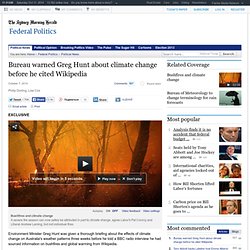 August 2014. Maps and Time Series Temperature and Precipitation Maps Temperature Anomalies Time Series Contents of this Section: Global Highlights The combined average temperature across global land and ocean surfaces for August 2014 was record high for the month, at 0.75°C (1.35°F) above the 20th century average of 15.6°C (60.1°F), topping the previous record set in 1998.

Melbourne swelters through record-breaking overnight temperatures around 30C. Wednesday March 9, 2016 - 07:26 EDT There was a beautiful sunrise in Melbourne at St Kilda beach after a record-breaking night of high temperatures. - ABC Melbourne has sweltered through its hottest March night on record with temperatures hovering around 30 degrees Celsius for most of the night. Northerly winds kept temperatures above 30 degrees until midnight when the mercury dipped slightly to 29C. Bureau of Meteorology senior forecaster Rod Dickson said there had been a severe heatwave weather set-up over Victoria for almost a week and the overnight temperature smashed the previous record of 26.9C in 2008. Coldstream, Frankston, Moorabbin, Scoresby and Watsonia all had their hottest recorded March day on Tuesday and Melbourne hit a top temperature of 38.9 C. Weekly Mean Temperature and Total Precipitation. Australia underprepared to deal with 'killer heat', Climate Council report says.

Wednesday March 2, 2016 - 10:37 EDT The report says work schedules and school start times may need to shift during extreme heat. - ABC Australia is underprepared to deal with the escalating problem of extreme "killer" heatwaves and a "whole of society approach" is needed to deal with the problem, a Climate Council report says. Record-breaking heat shows world 'losing battle' against climate change, Alan Finkel tells Q&A. Updated Australia's chief scientist has warned the planet is "losing the battle" against climate change, after new data showed February set a "completely unprecedented" record for the hottest month since global records began. Key points: February was the hottest seasonally adjusted month since records began in 1880Global temperatures are around 1C warmer than the pre-industrial averageChief scientist Alan Finkel tells Q&A the world is losing battle against climate change The data released by NASA compared each month going back to 1880 against average temperatures between 1951 and 1980, and confirmed preliminary analysis that February was the hottest month on record.

"You wouldn't want to dismiss it. "For all the effort we are putting into trying to avoid increases of emission, we are losing. "What we are doing with solar, wind, changing practices, behavioural practices and things like that, we're not winning the battle. "