Cane to captain New Zealand against All Blacks:Thursday 24 September 2015. New Zealand coach Steve Hansen made 12 changes from the side that beat Argentina. 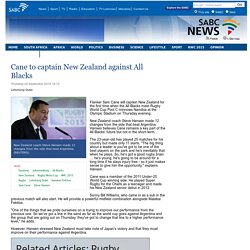 (REUTERS) Flanker Sam Cane will captain New Zealand for the first time when the All Blacks meet Rugby World Cup Pool C minnows Namibia at the Olympic Stadium on Thursday evening. New Zealand coach Steve Hansen made 12 changes from the side that beat Argentina. Hansen believes Cane remains a key part of the All Blacks' future but not in the short-term. The 23-year-old has played 25 matches for his country but made only 11 starts. Cane was a member of the 2011 Under-20 World Cup winning side. Sonny Bill Williams, who came in as a sub in the previous match will also start. "One of the things that we pride ourselves on is trying to improve our performance from the previous one. However, Hansen stressed New Zealand must take note of Japan's victory and that they must improve on their performance against Argentina.

Italian scrum under the spotlight against Canada:Thursday 24 September 2015. Canada are optimistic they can test Italy despite losing their opener 50-7 to Ireland. 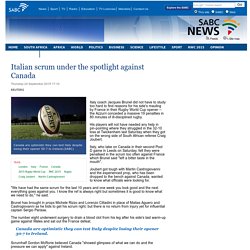 (SABC) Italy coach Jacques Brunel did not have to study too hard to find reasons for his side's mauling by France in their Rugby World Cup opener -- the Azzurri conceded a massive 19 penalties in 80 minutes of ill-disciplined rugby. His players will not have needed any help in pin-pointing where they struggled in the 32-10 loss at Twickenham last Saturday when they got on the wrong side of South African referee Craig Joubert. Italy, who take on Canada in their second Pool D game in Leeds on Saturday, felt they were penalised in the scrum too often against France which Brunel said "left a bitter taste in the mouth". Joubert got tough with Martin Castrogiovanni and the experienced prop, who has been dropped to the bench against Canada, wanted to know what officials were looking for. 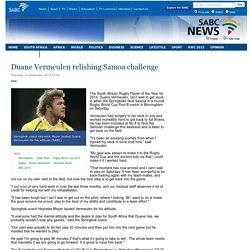 (SABC) The South African Rugby Player of the Year for 2014, Duane Vermeulen, can’t wait to get stuck in when the Springboks face Samoa in a crucial Rugby World Cup Pool B match in Birmingham on Saturday. Vermeulen had surgery to his neck in July and worked incredibly hard to get back to full fitness. He has been included at No 8 to face the Samoan challenge this weekend and is keen to get back on the field. "It’s been an amazing journey from when I injured my neck in June until now," said Vermeulen. "My goal was always to make it to the Rugby World Cup and the doctors told me that I could make it if I worked hard. "That moment has now arrived and I can’t wait to play on Saturday. "I put a lot of very hard work in over the last three months, and our medical staff deserves a lot of credit for helping me with my rehabilitation. "It has been tough but I can’t wait to get out on the pitch, where I belong.

Scotland send message, thrash Japan:Wednesday 23 September 2015. The loss of the inspirational Amanaki Mafi five minutes after half-time through injury seemed to take the wind out of the Japanese sails. 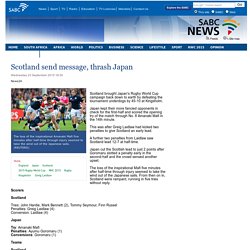 (REUTERS) Scotland brought Japan's Rugby World Cup campaign back down to earth by defeating the tournament underdogs by 45-10 at Kingsholm. Japan kept their more fancied opponents in check for the first-half and scored the opening try of the match through No. 8 Amanaki Mafi in the 14th minute. This was after Greig Laidlaw had kicked two penalties to give Scotland an early lead. 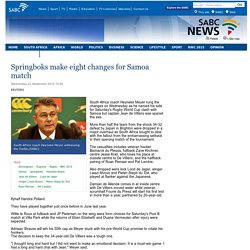 (SABC) South Africa coach Heyneke Meyer rung the changes on Wednesday as he named his side for Saturday's Rugby World Cup clash with Samoa but captain Jean de Villiers was spared the axe. More than half the team from the shock 34-32 defeat by Japan in Brighton were dropped in a major overhaul as South Africa sought to deal with the fallout from the embarrassing setback in their opening match of the tournament. The casualties includes veteran hooker Bismarck du Plessis, fullback Zane Kirchner, centre Jesse Kriel, who loses his place at outside centre to De Villiers, and the halfback pairing of Ruan Pienaar and Pat Lambie. Also dropped were lock Lood de Jager, winger Lwazi Mvovo and Pieter-Steph du Toit, who played at flanker against the Japanese. They have played together just once before in June last year. Adriaan Strauss will win his 50th cap as Meyer stuck with his pre-World Cup promise to rotate his hookers.

Boks promise fans a comeback:Monday 21 September 2015. The Boks have this week to fix their mistakes. 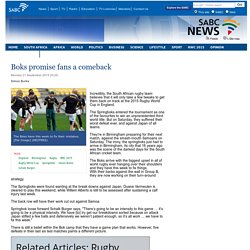 [File Image] (REUTERS) Incredibly, the South African rugby team believes that it will only take a few tweaks to get them back on track at the 2015 Rugby World Cup in England. The Springboks entered the tournament as one of the favourites to win an unprecedented third world title. But on Saturday, they suffered their worst defeat ever, and against Japan of all teams. Boks a laughing stock on social media:Monday 21 September 2015. Boks sink to sixth in world rankings:Monday 21 September 2015. South Africa’s 34-32 defeat has seen them drop three spots in the rankings, with all of Ireland, Wales and England moving past the Springboks. 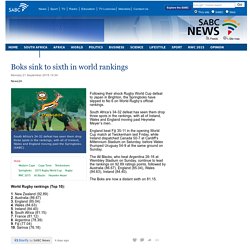 (SABC) Following their shock Rugby World Cup defeat to Japan in Brighton, the Springboks have slipped to No 6 on World Rugby’s official rankings. South Africa’s 34-32 defeat has seen them drop three spots in the rankings, with all of Ireland, Wales and England moving past Heyneke Meyer’s men. England beat Fiji 35-11 in the opening World Cup match at Twickenham last Friday, while Ireland dispatched Canada 50-7 at Cardiff’s Millennium Stadium on Saturday, before Wales thumped Uruguay 54-9 at the same ground on Sunday. The All Blacks, who beat Argentina 26-16 at Wembley Stadium on Sunday, continue to lead the rankings on 92.89 ratings points, followed by Australia (86.67), England (85.04), Wales (84.63), Ireland (84.40). The Boks are now a distant sixth on 81.15. World Rugby rankings (Top 10):1.

Springboks made wrong decisions: Meyer:Sunday 20 September 2015. Heyneke Meyer’s campaign as Bok coach is so far disappointing, to say the least. 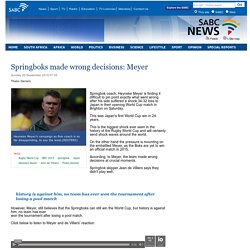 Japan front row scrums a possible challenge for Boks:Saturday 19 September 2015. Japan have never won a World Cup match and their players' relative lack of size has often been a disadvantage. 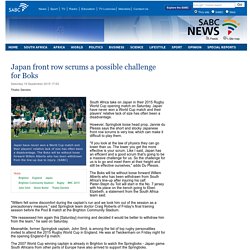 Click below for more from SABC Sports reporter Simon Burke. Springboks next opponents wins their first game:Sunday 20 September 2015. Samoa overcame the United States of America 25-16 in a Pool B match in Brighton, England. 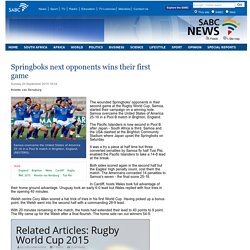 (REUTERS) The wounded Springboks' opponents in their second game at the Rugby World Cup, Samoa, started their campaign on a winning note. Samoa overcame the United States of America 25-16 in a Pool B match in Brighton, England. This is a low point for SA Rugby: Cosatu:Sunday 20 September 2015. The Springbok loss to Japan has revived Cosatu’s call for transformation in the Bok team. (SABC) The Western Cape branch of Cosatu on Saturday added fuel to the flames of defeat to the Springboks calling for coach Heyneke Meyer to be fired. A statement issued accuses the Springboks of being “a white team”. “The ‘old’ injured white men were just useless and gave Japan the space to play a great game. World Cup send off for Springboks:Friday 11 September 2015. Former Springboks player Lawrence Sephaka supports the Boks ahead of World Cup(SABC) People are gathering at Montecasino in Fourways, Johannesburg, to bid farewell and good luck to the Springboks. Fiji relaxed and ready to rattle England - McKee:Friday 18 September 2015.

Fiji are taking on England on Friday. (REUTERS) Fiji have enjoyed excellent preparation and have no injury worries for Friday's Rugby World Cup opener against hosts England, head coach John McKee said. The Pacific Islanders hope to cause a huge shock in front of 80,000 fans at Twickenham with millions more watching around the world. New Zealander McKee said his side were relaxed but ready and motivated to produce a big performance. "The good thing for us in this campaign is that we've had our group together for two and a half months which is unusual for us," McKee told reporters on Tuesday at his team's base in Weybridge.

"Normally the team comes together a week before the November tour or the June test series. Fiji will pick their side to face England on Wednesday with their opponents already having named their line-up - one that McKee "pretty much" expected. England coach Stuart Lancaster selected a full-strength side but Mckee said Fiji could cause them problems.