Default delay ahk. Controlsettext color AHK %comspec% COMSPEC. COMSPEC or ComSpec is one of the environment variables used in DOS, OS/2 and Windows, which normally points to the command line interpreter, which is by default COMMAND.COM in DOS or CMD.EXE in OS/2 and Windows NT. 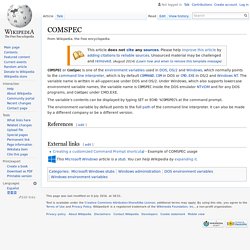 The variable name is written in all-uppercase under DOS and OS/2. Under Windows, which also supports lowercase environment variable names, the variable name is COMSPEC inside the DOS emulator NTVDM and for any DOS programs, and ComSpec under CMD.EXE. The variable's contents can be displayed by typing SET or ECHO %COMSPEC% at the command prompt. References[edit] External links[edit] Creating a customized Command Prompt shortcut - Example of COMSPEC usage. Windows - "start %comspec% /c script.cmd" vs "start cmd /C script.cmd"

Help with run, %comspec% where filepathname has spaces - Ask for Help - AutoHotkey Community. SetKeyDelay. Sets the delay that will occur after each keystroke sent by Send and ControlSend. 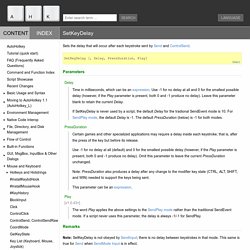 SetKeyDelay [, Delay, PressDuration, Play] Parameters Delay Time in milliseconds, which can be an expression. Use -1 for no delay at all and 0 for the smallest possible delay (however, if the Play parameter is present, both 0 and -1 produce no delay). If SetKeyDelay is never used by a script, the default Delay for the tradional SendEvent mode is 10. PressDuration Certain games and other specialized applications may require a delay inside each keystroke; that is, after the press of the key but before its release.

Use -1 for no delay at all (default) and 0 for the smallest possible delay (however, if the Play parameter is present, both 0 and -1 produce no delay). Note: PressDuration also produces a delay after any change to the modifier key state (CTRL, ALT, SHIFT, and WIN) needed to support the keys being sent. This parameter can be an expression. Play [v1.0.43+] Remarks Example. Autohotkey - How to send/type a colon. Hyperlink. CMD prompt, Escape Characters. Escape Characters, AHK. Confused about ControlSetText and ControlGetText - Ask for Help - AutoHotkey Community. So only Gui, Submit, nohide will save text from an edit control ? 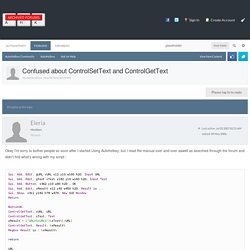 Umm, not quite right. "nohide" is an option, that keeps the gui visible. If you want the gui to hide, leave it out.The save, happens because of the "submit" sub-command. Gui, submit will save values from controls, into the associated variable that you assigned with :arrow: vassociatedvariablename If there is no associated variable, there is no save.But the saving works for other controls as well, like sliders and listboxes and ...The best way to know what the results are is to read the docs and try an example. Also, you don't have to specify a gLabel for each control... Not to contradict janopn, but to clarify, the glabel is added to call a subroutine when the control is 'messed with'The subroutine is typically called for each new character (of an edit) or when you a different item from listbox.