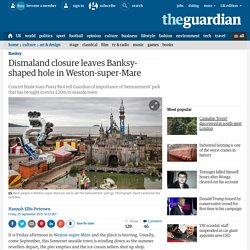 Usually, come September, this Somerset seaside town is winding down as the summer revellers depart, the pier empties and the ice-cream sellers shut up shop. But the town, once the du jour destination for Edwardian holidaymakers and which, like many such resorts, can evoke an air of faded glory, has experienced a renaissance this past month – and it is all thanks to Banksy. Since the elusive graffiti artist opened Dismaland, his anti-establishment “bemusement” park, in the disused Tropicana lido on the seafront, hundreds of thousands of visitors have flocked to Weston-super-Mare. The temporary installation, which features artwork by the likes of Damien Hirst, will close its doors on Sunday but figures show it has generated £20m in extra revenue for the people and businesses of the town. 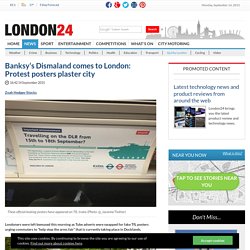 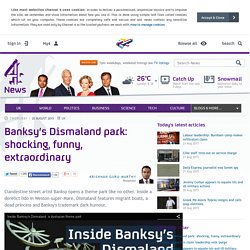 Inside a derelict lido in Weston-super-Mare, Dismaland features migrant boats, a dead princess and Banksy's trademark dark humour. It’s an extraordinary, shocking and funny experience from the moment you step through the gates of Dismaland. A fake security check underlines the fabricated threats Banksy and his collaborators believe we are being guarded against. Once inside, every piece from more than 50 international artists is a twist on what you’d find in a seaside theme park.

Banksy himself has moved away from graffiti and street art in this exhibition, and instead his pieces are Banksy images rendered in 3-D - from the carousel with a passenger making lasagne from one of the horses, to a distressing piece about the current crisis off the seas of southern Europe, in which remote controlled boats have been taken over by migrants.

Banksy doesn't do interviews, so we asked him by email why he departed from street art? Easter 'Banksy' Showing Jesus Carrying Cross Appears Round London Bridge Is Fake, PR Confirms. New artwork appears at site of taken London Banksy. 23 February 2013Last updated at 23:44 ET The work is thought to be a commentary on the use of sweat-shop labour A Banksy artwork which was taken from a London street and had been listed for auction in the US has been withdrawn from sale, the BBC has learned. 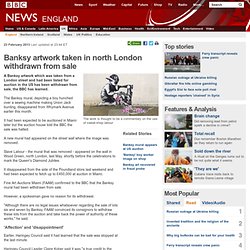 The Banksy mural, depicting a boy hunched over a sewing machine making Union Jack bunting, disappeared from Whymark Avenue earlier this month. It had been expected to be auctioned in Miami later but the auction house told the BBC the sale was halted. A new mural had appeared on the street wall where the image was removed. Slave Labour - the mural that was removed - appeared on the wall in Wood Green, north London, last May, shortly before the celebrations to mark the Queen's Diamond Jubilee. 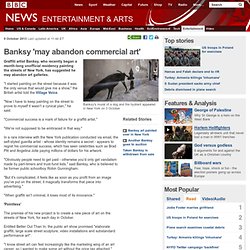 "I started painting on the street because it was the only venue that would give me a show," the British artist told the Village Voice. "Now I have to keep painting on the street to prove to myself it wasn't a cynical plan," he said. "Commercial success is a mark of failure for a graffiti artist. " Methods Of Modern Love: Banksy In Britain: LONDON Part 2. Clown House, Stoke Newington, N16 0UH. 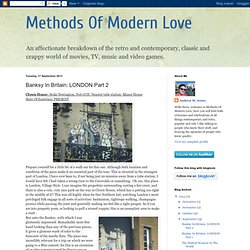 Nearest tube station: Manor HouseState Of Existence: PRESENT Prepare yourself for a little bit of a walk out for this one. Although both location and condition of the piece make it an essential part of the tour. This is situated in the strangest part of London, I have ever been to, if not being just 20 minutes away from a tube station, I would have felt I had taken a wrong turn to the Cotswolds or something. Oh yes, this place is London, Village Style. Methods Of Modern Love: Banksy In Britain: LONDON Part 1. Since about 2011, I have consistently tried to make my life seem more exciting by engulfing myself in as much as the arts world offerings that is humanly possible for someone living in the North West of England to engulf. 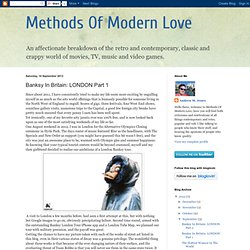 Scores of gigs, three festivals, four West End shows, countless gallery visits, numerous trips to the Capital, a good few foreign city breaks have pretty much ensured that every penny I earn has been well spent. Yet ironically, one of my favorite arty jaunts ever was 100% free, and is now looked back upon as one of the most satisfying weekends of my life so far. One August weekend in 2012, I was in London for the Alternative Olympics Closing ceremony in Hyde Park. The days roster of music featured Blur as the headliners, with The Specials and New Order as support (you might have guessed this bit wasn't free), and the city was just an awesome place to be, warmed with Olympic glee and summer happiness. Master Artist, Portobello Road, W10 5TE. Part 2 Coming Very Soon! Methods Of Modern Love: Banksy In Britain: LONDON Part 3. Illegal Rat, Clipstone Street, W1W 6UP. 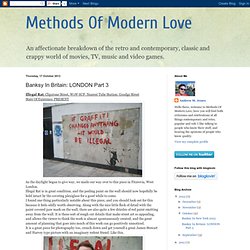 Nearest Tube Station: Goodge StreetState Of Existence: PRESENT As the daylight began to give way, we made our way over to this piece in Fitzrovia, West London. Illegal Rat is in great condition, and the peeling paint on the wall should now hopefully be held intact by the covering plexiglass for a good while to come. I found one thing particularly notable about this piece, and you should look out for this because it feels oddly worth observing.

Along with the nice little fleck of detail with the paint covered paw mark on the wall, there are also quite a few drizzles of red paint emitting away from the wall. LDN Blog - Banksy vs Robbo - Timeline updated: 23/02/2014. UPDATED: 23/02/2014. 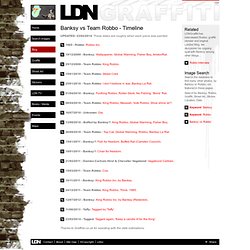 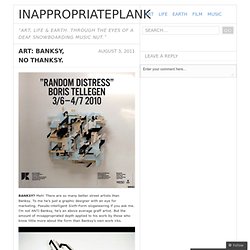 Meh! There are so many better street artists than Banksy. To me he’s just a graphic designer with an eye for marketing. Banksy uses 'tag' of jailed graffiti artist Tox - Daniel Halpin - as latest artwork appears on London street. By Lee Moran Updated: 18:20 GMT, 24 June 2011 There is known to be no honour amongst thieves - but does the same apply to graffiti artists? In the secretive world of street art it is hard enough to find out the protagonists' real names, let alone where they stand on social issues.

And so Banksy's latest creation has provoked quite a debate - as to whether he is paying tribute to a fallen brother, or simply having a laugh at his expense. Debate: It is not known whether Banksy is showing solidarity towards Tox, or making fun of him Notorious graffiti vandal Daniel Halpin, 26, hit the headlines earlier this month when he was convicted of a string of spray paint attacks across England between 2007 and 2010. Graffoto Blog: Banksy v Robbo - War Continues. .........Or does it? Are these latest changes by Banksy or not? Opinion in the Graffoto bunker has been divided. Can’t say that passions rose to anywhere near bloodshedding levels though. All the changes basically involve buffing the Team Robbo wording, tidying up and re-working the defaced images.

The Waiter rat has changed to this, little more than buffing out the Team Robbo words, which is ironic as Graffoto likes to imagine Team Robbo left the stencil intact because it was pish anyway and sufficient embarrassment to Banksy itself. "I don't Believe in Global Warming/War" has been buffed and replaced by a well executed roller headed flamingo, witty for the proximity of London Zoo with its well stocked flamingo pond. Banksy Vs Robbo: Advantage Robbo. Vandal cashes in on law loophole. A graffiti vandal responsible for hundreds of thousands of pounds worth of damage across London stands to make a four figure sum by selling his work. Daniel Halpin was given an ASBO and jailed for spraying his TOX tag on trains and walls for nine years.

Now he is selling 100 canvases, bearing his notorious mark, at £75 each. Although the law prohibits people from profiting by criminal acts, the BBC has learned he will be able to keep the cash because of a "glaring loophole". Mr Halpin's spree began in 2001 when the tag TOX01 started to appear. It can be seen as far afield as Paris and one London Underground manager said: "I don't know anywhere you can't see a TOX tag - they are in places even I don't know how to access.