The Law Engine! Snippy the Horse. UFO Highway - www.UFOHighway.com. 50 Most Out-of-This-World UFO Blogs. FBI Can Turn On Your Webcam Without You Knowing It. The FBI apparently has the ability to take over your computer’s webcam and your smartphone’s camera and use them to spy on you, according to recent reports. 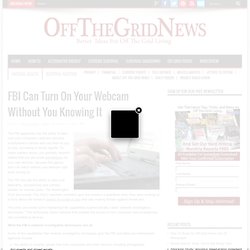 To make matters worse, you probably wouldn’t realize that you are under surveillance via your own devices, because the agency also can watch without your webcam light even turning on. U.S. Postal Service Logging All Mail for Law Enforcement. Photo WASHINGTON — Leslie James Pickering noticed something odd in his mail last September: a handwritten card, apparently delivered by mistake, with instructions for postal workers to pay special attention to the letters and packages sent to his home. 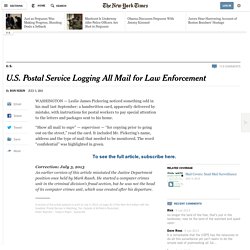 “Show all mail to supv” — supervisor — “for copying prior to going out on the street,” read the card. It included Mr. Pickering’s name, address and the type of mail that needed to be monitored. The word “confidential” was highlighted in green. PRIVACY INFRINGEMENT. MIT Updates Wi-Fi Tech That Can Track You Through Walls. Kevin SamsonActivist Post One of the hallmarks of technology is dual-use capability. 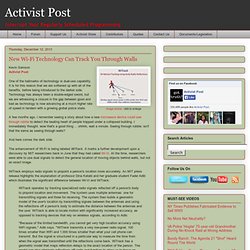 It is for this reason that we are softened up with all of the benefits, before being introduced to the darker side. Technology has always been a double-edged sword, but we are witnessing a closure in the gap between good and bad as technology is now advancing at a much higher rate of speed in tandem with a growing global police state. A few months ago, I remember seeing a story about how a new microwave device could see through rubble to detect the beating heart of people trapped under a collapsed building.

I immediately thought, wow that's a good thing ... ohhhh, wait a minute. And here comes the dark side. The enhancement of Wi-Fi is being labeled WiTrack. WiTrack employs radio signals to pinpoint a person's location more accurately. WiTrack operates by tracking specialized radio signals reflected off a person's body to pinpoint location and movement. Millions of Americans installing 'perfect spying device' in their own living rooms: Amazon Fire TV monitors and records your conversations - NaturalNews.com.

Tuesday, July 15, 2014by Mike Adams, the Health RangerTags: Amazon Fire TV, audio surveillance, perfect spying device (NaturalNews) Amazon.com is building the CIA's new $600 million data center, reports the Financial Times. (1) At the same time Amazon.com is building this massive cloud computing infrastructure for the CIA, the company is also shipping millions of Fire TV set-top devices to customers who are placing them in their private homes. 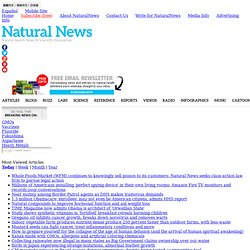 I have one myself, and it's a terrific piece of hardware for delivering Prime video content. In fact, in terms of its usability and specs, it's far superior to Roku or Netflix-capable devices. Fire TV is, hands down, the best set-top video delivery device on the market today. FEMA & their Camps. How the NSA's Domestic Spying Program Works. The NSA’s domestic spying program, known in official government documents as the “President’s Surveillance Program,” ("The Program") was implemented by President George W. 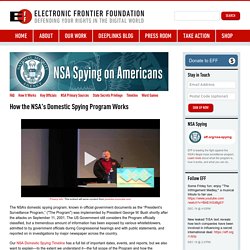 Bush shortly after the attacks on September 11, 2001. The US Government still considers the Program officially classified, but a tremendous amount of information has been exposed by various whistleblowers, admitted to by government officials during Congressional hearings and with public statements, and reported on in investigations by major newspaper across the country. Our NSA Domestic Spying Timeline has a full list of important dates, events, and reports, but we also want to explain—to the extent we understand it—the full scope of the Program and how the government has implemented it.

In the weeks after 9/11, President Bush authorized the National Security Agency (NSA) to conduct a range of surveillance activities inside the United States, which had been barred by law and agency policy for decades. Surveillance of Citizens by Government. Carpe Noctem - Seize the NightCarpe Noctem – Seize the Night. LSD was invented in Switzerland by Albert Hofmann, a researcher for Sandoz pharmaceuticals. 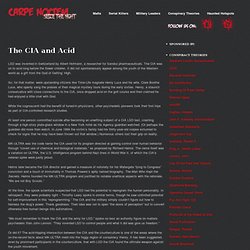 The CIA was on to acid long before the flower children. It did not spontaneously appear among the youth of the Western world as a gift from the God of Getting’ High. So, for that matter, were upstanding citizens like Time-Life magnate Henry Luce and his wife, Clare Boothe Luce, who openly sang the praises of their magical mystery tours during the early sixties.

Henry, a staunch conservative with close connections to the CIA, once dropped acid on the golf course and then claimed he had enjoyed a little chat with God. While the cognoscenti had the benefit of tuned-in physicians, other psychedelic pioneers took their first trips as part of CIA-controlled research studies. At least one person committed suicide after becoming an unwitting subject of a CIA LSD test, crashing through a high-story plate-glass window in a New York hotel as his Agency guardian watched. English pages. Opt out of PRISM, the NSA's global data surveillance program - PRISM BREAK. NSA slides explain the PRISM data-collection program. Blueprints & documentation. Food On Table.