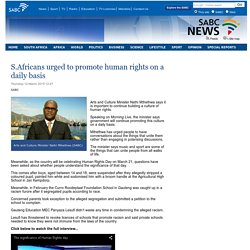 (SABC) Arts and Culture Minister Nathi Mthethwa says it is important to continue building a culture of human rights. Speaking on Morning Live, the minister says government will continue promoting this culture on a daily basis. Mthethwa has urged people to have conversations about the things that unite them rather than engaging in polarising discussions. The minister says music and sport are some of the things that can unite people from all walks of life.

Meanwhile, as the country will be celebrating Human Rights Day on March 21, questions have been asked about whether people understand the significance of that day. This comes after boys, aged between 14 and 18, were suspended after they allegedly stripped a coloured pupil, painted him white and sodomised him with a broom handle at the Agricultural High School in Jan Kempdorp. Concerned parents took exception to the alleged segregation and submitted a petition to the school to complain. Ukuthwala victims against the practice:Thursday 8 January 2015. Young girls are being abducted through ukuthwala. 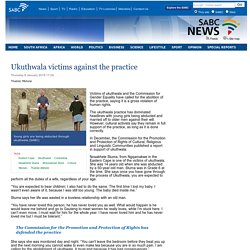 (SABC) Victims of ukuthwala and the Commission for Gender Equality have called for the abolition of the practice, saying it is a gross violation of human rights. The ukuthwala practice has dominated headlines with young girls being abducted and married off to older men against their will. School apologises for racial segregation:Monday 2 February 2015. The school says plans for integration were under way. 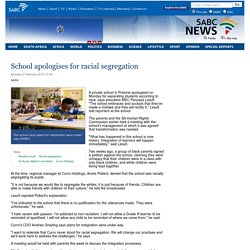 (SABC) A private school in Pretoria apologised on Monday for separating students according to race, says education MEC Panyaza Lesufi. "The school embraces and accepts that they've made a mistake and they will rectify it," Lesufi told reporters at the school. The parents and the SA Human Rights Commission earlier held a meeting with the school's management at which it was agreed that transformation was needed. "What has happened in this school is now history.

Two weeks ago, a group of black parents signed a petition against the school, claiming they were unhappy that their children were in a class with only black children, and white children were being kept together. At the time, regional manager at Curro Holdings, Andre Pollard, denied that the school was racially segregating its pupils. "It is not because we would like to segregate the whites; it is just because of friends. 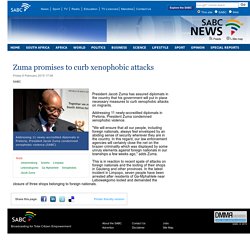 (SABC) President Jacob Zuma has assured diplomats in the country that his government will put in place necessary measures to curb xenophobic attacks on migrants. Addressing 11 newly-accredited diplomats in Pretoria, President Zuma condemned xenophobic violence. "We will ensure that all our people, including foreign nationals, always feel enveloped by an abiding sense of security wherever they are in the country. In this regard, our law enforcement agencies will certainly close the net on the brazen criminality which was displayed by some unruly elements against foreign nationals in our townships a few weeks ago," adds Zuma. SA must be consistent in upholding of human rights: Navi Pillay. Newsroom: Talking Xenophobic attacks. ‘Xenophobia, attacks on gays undermining human rights efforts in SA’:Tuesday 21 January 2014. Protection of human rights in SA undermined by xenophobic attacks, widespread violence, among others(SABC) South Africa has received a mixed review on its human rights for 2013, this according to a report released by international Non-Governmental Organisation, Human Rights Watch (HRW), in Johannesburg on Tuesday. 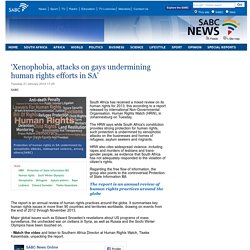 The HRW says while South Africa's constitution provides strong protection for human rights, such protection is undermined by xenophobic attacks on the businesses and homes of refugees, asylum seekers and migrants. HRW also cites widespread violence, including rapes and murders of lesbians and trans-gender people, as evidence that South Africa has not adequately responded to the violation of citizen's rights. Regarding the free flow of information, the group also points to the controversial Protection of State Information Bill. “SA has a deep seated entrenched culture of violence”:Monday 9 February 2015. 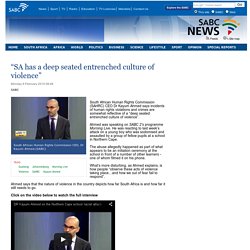 (SABC) South African Human Rights Commission (SAHRC) CEO Dr Kayum Ahmed says incidents of human rights violations and crimes are somewhat reflective of a “deep seated entrenched culture of violence”. Ahmed was speaking on SABC 2's programme Morning Live. He was reacting to last week’s attack on a young boy who was sodomised and assaulted by a group of fellow pupils at a school in Northern Cape.

The abuse allegedly happened as part of what appears to be an initiation ceremony at the school in front of a number of other learners - one of whom filmed it on his phone. What’s more disturbing, as Ahmed explains, is how people “observe these acts of violence taking place…and how we out of fear fail to respond”. HRC probes service deliveries :Tuesday 24 February 2015. The Human Rights Commission has decided to intervene in the service delivery protests problem. 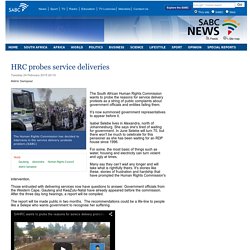 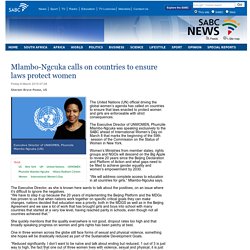 (UN) The United Nations (UN) official driving the global women’s agenda has called on countries to ensure that laws enacted to protect women and girls are enforceable with strict consequences. The Executive Director of UNWOMEN, Phumzile Mlambo-Ngcuka was speaking exclusively to the SABC ahead of International Women’s Day on March 8 that marks the beginning of the 59th session of the Commission on the Status of Women in New York. Women’s Ministries from member states, rights groups and NGOs will descend on the Big Apple to review 20 years since the Beijing Declaration and Platform of Action and what gaps need to be filled to achieve gender equality and women’s empowerment by 2030. “We will address complete access to education in all countries for girls,” Mlambo-Ngcuka says. The Executive Director, as she is known here wants to talk about the positives, on an issue where it’s difficult to ignore the negatives. 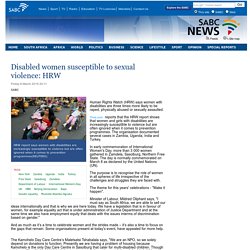 Time.com reports that the HRW report shows that women and girls with disabilities are increasingly susceptible to violence but are often ignored when it comes to prevention programmes. The organisation documented several cases in Zambia, Uganda, India and Turkey. In early commemoration of International Women's Day, more than 3 000 women gathered in Zamdela, Sasolburg, Northern Free State. Minister Pandor rejects report on SA’s human rights record:Thursday 23 January 2014. Home Affairs Minister, Naledi Pandor, was speaking at the TNA Breakfast meeting on Thursday. 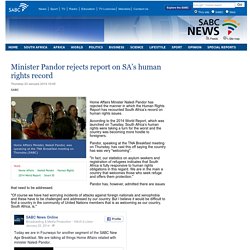 Minister Pandor rejects report on SA's human rights record. Human rights violations on farms extensive and not exceptional:Friday 23 March 2012. As predicated, the Human Rights watch report caused quite a media stir for exactly one week. The responses were scripted: the white farmers vociferously denied its findings, questioned the methodology, as did the Democratic Alliance who counts amongst its support base white commercial farmers.

Government was ominously quiet while the ANC in the Western Cape came out in condemnation of the findings. We, farm worker NGOS and trade unions equally predictably seized the opportunity to again restate our long cried assertion: human rights violations on farms extensive and not exceptional. Now that the dust has settled down and the screams across the political isles have settled, I may be important to look at the report with sobriety and suggest a few concrete steps forward. In truth, the HRW report made no new claims that have not been firmly in the public domain for at least ten years. The same holds true for government. State of SAs human rights unsatisfactory: HRC:Friday 21 March 2014. SAHRC chief executive Kayum Ahmed says poor service delivery means human rights in South Africa are not up to scratch.

(SABC) After 20 years of democracy, the South African Human Rights Commission (SAHRC) says it is not satisfied with the state of human rights in the country. In a Human Rights Day statement, the Commission says the delivery of services has been a major stumbling block to ensure basic human rights for all. According to their studies, 36% of South Africans do not have access to adequate water and sanitation. Xenophobia still a problem in SA: African Diaspora:Thursday 15 May 2014.