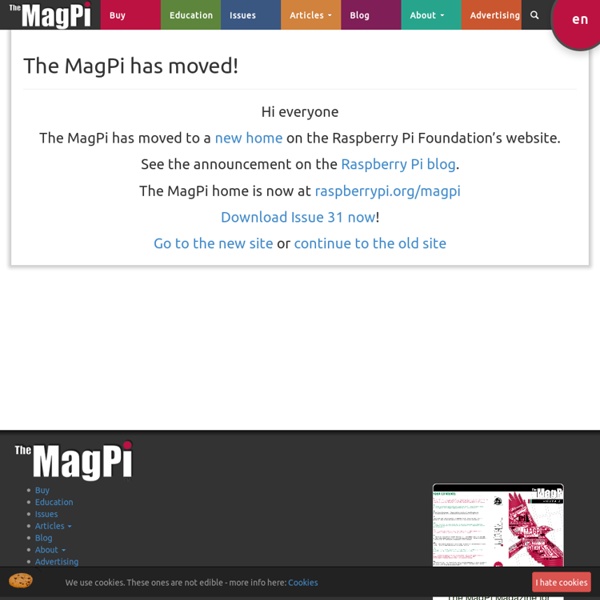 Welcome to Issue 22 of The MagPi magazine. We kick off this month’s issue with an article on solar tracking. Nathan and Nicholas introduce their amazing project, the ‘Reflective Solar Tracker’, a solar cell with the brains of a Raspberry Pi, capable of chasing the sun to improve energy capture by up to 140%! Andy Baker returns following his successful quad-copter series and this time he is featuring his intelligent night light. Andy describes building this project to reassure his son at night and banish those ‘under-bed monsters’. It’s a great mix of both the PiBow case and PiGlow add on-board.

untitled The aim of this exercise is to show students how to the Raspberry Pi may be used in conjunction with a L293D chip to control the direction of rotation a DC motor, and how the speed of a DC motor may be controlled using Pulse Width Modulation (PWM). The exercise will also demonstrate how a simple human machine interface can be programmed to control the system in various different ways. Learning Objectives Rasberry pi Way back when the Kinect was first released, there was a realization that this device would be the future of everything 3D. It was augmented reality, it was a new computer interface, it was a cool sensor for robotics applications, and it was a 3D scanner. When the first open source driver for the Kinect was released, we were assured that this is how we would get 3D data from real objects into a computer. Since then, not much happened. We’re not using the Kinect for a UI, potato gamers were horrified they would be forced to buy the Kinect 2 with the new Xbox, and you’d be hard pressed to find a Kinect in a robot. 3D scanning is the only field where the Kinect hasn’t been over hyped, and even there it’s still a relatively complex setup. This doesn’t mean a Kinect 3D scanner isn’t an object of desire for some people, or that it’s impossible to build a portabilzed version.

Sneak Peek: Adafruit Raspberry Pi WebIDE September 19, 2012 AT 2:14 pm We love the Raspberry Pi. This tiny computer has so much potential for makers, and it is offered at an extremely reasonable price. The one thing we didn’t like about the Pi is how inaccesible it is to those who are new to Linux. So, the tiny team that brought you the Adafruit Learning System set out to develop our own way to open up the Raspberry Pi for everyone. Adapt your Raspberry Pi Camera for close-up use The Raspberry Pi Camera is a fixed focus module, so that anything from about 0.5m to infinity is acceptably sharp. This has strengths and weaknesses, as with every design decision. The weakness in this case is that if you want to film or photograph anything closer than about 50-75cm it will be out of focus.

RPi Guides Back to the Hub. Community Pages: Tutorials - a list of tutorials. Pi Crust breakout board makes it easy to get peripherals on Raspberry Pi Joe Walnes, a Chicago-based hacker and maker, has just released a design for what he has dubbed the Pi Crust: a very cheap new hardware add-on for the Raspberry Pi. The breakout board, which debuted on Wednesday, is meant to make it easier to tack various hardware peripherals onto the cheap computer, and it does so in an compact design. The new board only adds 2mm of height to the existing Raspberry Pi. As Walnes lays out on his site, there are various well-labelled pins, including GPIO, I2C, SPI, UART, and power.

amazon.co I tested this product, with an iPhone 4S, an iPad gen 1, and a blackberry.Upon opening the product, I was pleasantly surprised to find an iPhone/iPad connector, which it says it doesn't come with. So that was an added bonus. Build quality is excellent, it feels very sturdy and solid, yet not too heavy. It even comes with a built-in torch, which is surprisingly powerful.Using the juice pack is simple. There's a micro USB port on the side labelled "IN" which you use to charge it. You can either use a USB port on a computer, which is a slow option.