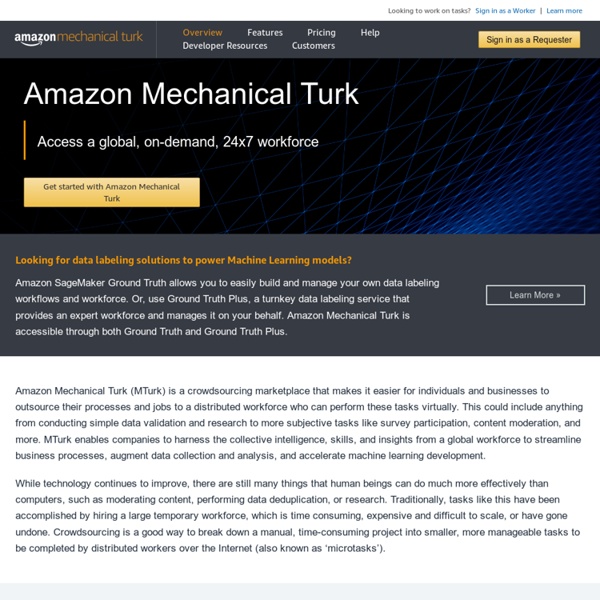 Ask workers to complete HITs - Human Intelligence Tasks - and get results using Mechanical Turk. Get Started. As a Mechanical Turk Requester you: Have access to a global, on-demand, 24 x 7 workforce Get thousands of HITs completed in minutes Pay only when you're satisfied with the results

Crowdsourcing Crowdsourcing is a sourcing model in which individuals or organizations obtain goods and services. These services include ideas and finances, from a large, relatively open and often rapidly-evolving group of internet users; it divides work between participants to achieve a cumulative result. The word crowdsourcing itself is a portmanteau of crowd and outsourcing, and was coined in 2005.[1][2][3][4] As a mode of sourcing, crowdsourcing existed prior to the digital age (i.e. Crowdsourcing's Champions (GE, OMC, SNE, WEN) Crowdsourcing is all the rage these days, another aspect of the cloud computing proliferation that has companies doing crazy things. Even if you have never heard of it, you have probably purchased a product that was developed using crowdsourcing or have been directly involved yourself. Crowdsourcing is the outsourcing of idea generation or tasks that would normally be tackled by employed workers or contractors for a particular company. The task or idea is outsourced to the masses via the Internet or social media technology. Crowdsourcing can be more than just a task or an idea.

Part 1: The essential collection of visualisation resources This is the first part of a multi-part series designed to share with readers an inspiring collection of the most important, effective, useful and practical data visualisation resources. The series will cover visualisation tools, resources for sourcing and handling data, online learning tutorials, visualisation blogs, visualisation books and academic papers. Your feedback is most welcome to help capture any additions or revisions so that this collection can live up to its claim as the essential list of resources. The Beginner’s Guide to Outsourcing Effectively My journey with outsourcing began in college. I wish I could say that I accomplished something. I wish I could say that my decision to outsource made me money, or even just saved me time. Yet, I can’t. I did everything wrong. I saved up $800 for outsourcing tasks (which was also my net worth at the time).

How Loon Works – Project Loon – Google Envelope The inflatable part of the balloon is called a balloon envelope. A well-made balloon envelope is critical for allowing a balloon to last around 100 days in the stratosphere. Loon’s balloon envelopes are made from sheets of polyethylene plastic, and they measure fifteen meters wide by twelve meters tall when fully inflated. When a balloon is ready to be taken out of service, gas is released from the envelope to bring the balloon down to Earth in a controlled descent. Microwork Microwork is a series of small tasks which together comprise a large unified project, and are completed by many people over the Internet. [1] [2] Microwork is considered the smallest unit of work in a virtual assembly line. [3] It is most often used to describe tasks for which no efficient algorithm has been devised, and require human intelligence to complete reliably. The term was developed in 2008 by Leila Chirayath Janah of Samasource. [4] [5] Microtasking[edit]

Crowdsourcing specific microtasks Since the first-ever Mechanical Turk meetup a year ago, there has been an explosion in crowdsourcing services and a well-attended conference in San Francisco. I remain enthusiastic about crowdsourcing, but the number of companies has me worried about quality of work. Fortunately specialization is already occurring, so for particular tasks there are companies out there ready to provide high-quality service. One company that recently caught my eye is Helsinki (and SF) based Microtask. Founded by Computer Graphics (CG) and Computer Vision (CV) veterans, Microtask has chosen to focus in a few areas where CG and CV are relevant. Aside from speech transcription, they currently provide form-processing (digitizing hand-written forms) and archive digitization services, and have plans to expand into image categorization and video indexing in the near future.

Big Data means Advanced Data Visualization The last few years have been particularly exciting for data visualizations. We’ve witnessed a boom in the popularity of infographics and in tools to help create everyday visualizations for practical purposes. With all these exciting developments it’s difficult not to wonder what the future of this field will look like. Industry-renowned data visualization expert, Edward Tufte once said “The world is complex, dynamic, multidimensional; the paper is static, flat. How are we to represent the rich visual world of experience and measurement on mere flatland?” Tutfe brings up a valid point. Human Workers, Managed by an Algorithm Global workforce: Remote digital workers earned $0.32 each for producing these self-portraits. Stephanie Hamilton is part of something larger than herself. She’s part of a computer program. The 38-year-old resident of Kingston, Jamaica, recently began performing small tasks assigned to her by an algorithm running on a computer in Berkeley, California. That software, developed by a startup called MobileWorks, represents the latest trend in crowdsourcing: organizing foreign workers on a mass scale to do routine jobs that computers aren’t yet good at, like checking spreadsheets or reading receipts.

MIT Technology Review’s 50 Smartest Companies 2015, from Tesla to Uber Massive solar panel factories. Fertility treatments. Friendly robots. Meet the companies reshaping the technology business. Sometimes we hear that technology companies have lost their ambition. Solver Develops Solution to Help Clean Up Remaining Oil From the 1989 Exxon Valdez Disaster Boston, MA and Cordova, AK - November 7, 2007 - InnoCentive, the leader in prize-based Open Innovation sourcing, is helping to make a positive impact on Environmental Conservation by working with the Oil Spill Recovery Institute (OSRI) and other conservation groups. OSRI has posted 3 Challenges on the InnoCentive website, all dealing with oil spill recovery issues. The first of these challenges was solved last week by an oil industry outsider who used his expertise in the concrete industry to come up with the winning solution.

Mobile App Challenge Home Latest App News Run Your Own Contest Blog Texas drought maps and photos Various plans for dealing with future droughts and growing demand for water in Texas exist, but most comprehensive — and accepted — is the state Water Plan. It offers a frank assessment of the current landscape, saying Texas “does not and will not have enough water to meet the needs of its people, its businesses, and its agricultural enterprises.” It predicts that “if a drought affected the entire state like it did in the 1950s,” Texas could lose around $116 billion, over a million jobs, and the growing state's population could actually shrink by 1.4 million people. The water plan also offers a range of solutions for dealing with the problem, focusing mainly on conservation and efficiency, but also on building new reservoirs, tapping additional sources of water underground and treating effluent water.