Gnebehay/OpenTLD. RPi Cam Web Interface. Hello I'd like to share my newest project: A web interface for the RPi Cam that can be opened on any browser (smartphones included) and contains the following features:- View, stop and restart a live-preview with low latency and high framerate. 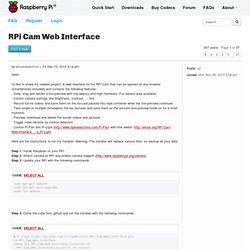 Full sensor area available.- Control camera settings like brightness, contrast, ... live- Record full-hd videos and save them on the sd-card packed into mp4 container while the live-preview continues- Take single or multiple (timelapse) full-res pictures and save them on the sd-card (live-preview holds on for a short moment)- Preview, download and delete the saved videos and pictures- Trigger video records by motion detection- Control Pi-Pan and Pi-Light ( with this addon: ... d_Pi-Light Here are the instructions to run my installer. Warning: The installer will replace various files, so backup all your data. Step 1: Install Raspbian on your RPiStep 2: Attach camera to RPi and enable camera support ( 3: Update your RPi with the following commands: RaspiMJPEG. Well, I'm trying to make this work but I don't see a view. 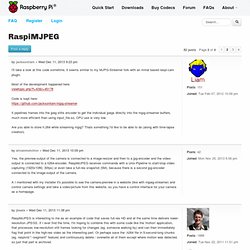 First I used raspistill in combination with mjpeg-streamer, that workied but I always had problems with an image that got darker.So I decided today to start all over, then I saw this RaspiMJPEG and wanted to try that. I also use Webiopi to close and open the chickencoop door and I can control the light (on/off). I made a script: Code: Select all #! Nohup $(raspimjpeg -w 800 -h 600 -d 5 -of /run/shm/img.jpg) & How to compile FFmpeg for Raspberry Pi (Raspbian) – FFmpeg. If you are familiar with a cool little thing named ​Raspberry Pi (a credit-card-sized single-board computer, shortly called RPi) and you need to compile your FFmpeg source code to be able to run it on ​Raspbian (a Debian Linux-based operating system optimized for the Raspberry Pi hardware), then this tutorial might help you. 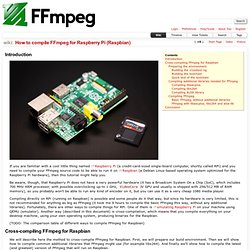 Be aware, though, that Raspberry Pi does not have a very powerful hardware (it has a Broadcom System On a Chip (SoC), which includes 700 MHz ARM processor, with possible overclocking up-to 1 GHz, VideoCore IV GPU and usually is shipped with 256/512 MB of RAM memory), so you probably won't be able to run any kind of encoder on it, but you can use it as a very cheap 1080 media player. Compiling directly on RPi (running on Raspbian) is possible and some people do it that way, but since its hardware is very limited, this is not recommended for anything as big as FFmpeg (it took me 9 hours to compile the basic FFmpeg this way, without any additional libraries). . . . RPi Cam Web Interface. Faster Video Streaming on Raspberry Media Server with MJPG STREAMER. MJPG Streamer is a simple and straight forward video streamer, but it is faster than most streamers, so this may be ideal for your remote control projects in which real-time video feed is crucial for navigation and orientation purposes. 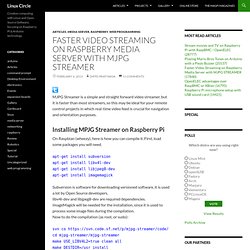