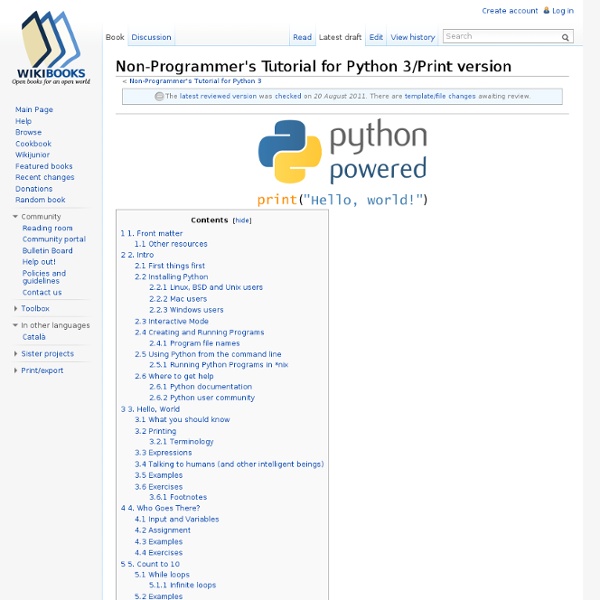 All example Python source code in this tutorial is granted to the public domain. Therefore you may modify it and relicense it under any license you please. Since you are expected to learn programming, the Creative Commons Attribution-ShareAlike license would require you to keep all programs that are derived from the source code in this tutorial under that license. Since the Python source code is granted to the public domain, that requirement is waived. This tutorial is more or less a conversion of Non-Programmer's Tutorial for Python 2.6. The Non-Programmers' Tutorial For Python 3 is a tutorial designed to be an introduction to the Python programming language. If you have programmed in other languages I recommend using Python Tutorial for Programmers written by Guido van Rossum. If you have any questions or comments please use the discussion pages or see Authors page for author contact information. Thanks go to James A. Other resources First things first Hello, World! Halt! Mac users Output: Related:  Raspberry Pi

Python Tutorial The Python tutorial is constructed to teach you the fundamentals of the Python programming language. Eventually, the Python Tutorial will explain how to construct web applications, but currently, you will learn the basics of Python offline. Python can work on the Server Side (on the server hosting the website) or on your computer. However, Python is not strictly a web programming language. Python works much like the two previous categories, PHP and ColdFusion as they are all server side programming languages. For a more tangible and better look into the Python language, consider reading the following book. Your code will execute in this window. Let's explore some more tutorials or topics! If you enjoyed this resource, support me by sharing this page with others.

Think Python: How to Think Like a Computer Scientist How to Think Like a Computer Scientist by Allen B. Downey This is the first edition of Think Python, which uses Python 2. If you are using Python 3, you might want to use the second edition, which is here. Buy this book at Amazon.com Download Think Python in PDF. Read Think Python in HTML. Example programs and solutions to some problems are here (links to specific examples are in the book). Description Think Python is an introduction to Python programming for beginners. Some examples and exercises are based on Swampy, a Python package written by the author to demonstrate aspects of software design, and to give readers a chance to experiment with simple graphics and animation. Think Python is a Free Book. If you have comments, corrections or suggestions, please send me email at feedback{at}thinkpython{dot}com. Other Free Books by Allen Downey are available from Green Tea Press. Download Precompiled copies of the book are available in PDF. Earlier Versions Translations and adaptations

Non-Programmer's Tutorial for Python 3 Authors Contributors to this book Front matter Initial remarks Intro Installing and using Python – where to get help Hello, World The famous first program – screen output – variables – numbers and calculations Who Goes There? Interactive input – strings Count to 10 while loops Decisions if statements Debugging Finding out what goes wrong Defining Functions Structuring programs with the use of functions Advanced Functions Example (Almost) mind-blowing example of how programmers can think Lists Variables containing more than one value For Loops A second kind of loop Boolean Expressions Computer logic – True and False – and and or – not Dictionaries Variables containing key/value pairs Using Modules Extensions to the standard set of functionality More on Lists Using elements or parts of lists Revenge of the Strings More advanced text manipulations File IO Reading from files and writing to files Dealing with the imperfect How to handle errors Recursion Recursive Functions Intro to Object Oriented Programming in Python 3 The End

10 Engaging Python projects | Raspebrry Pi, python, CPC 10 Engaging Python Projects is a series of worksheets I have produced to introduce Key Stage 2 and 3 students to the world of the Raspberry Pi and programming in Python. I started creating some worksheets for my own school Pi club and then thought - why not make it into a free iBook. The iBook is free and will also be available as a PDF if requested by schools. The projects are available in an iBook format for Mac and iPad from the Apple iBook Store here The projects are based around the Traffic Light Kit available from CPC for £4.79 including VAT and can be bought here A draft of the booklet can be downloaded here Projects include: Making 1 LED flash with the GPIOMorse code flashesDisco lights with there LEDsReaction time gameTraffic lightsI would love your feedback on this resource as I will be using this with my own Pi club at school.

Apply Silicon Valley May 3rd, 4th, and 17th, 9am-4pm What do Instagram, Snapchat and Twitter have in common? They were all created by people who knew how to code. Programming is a skill that gives you the ability to create and innovate. That’s what CodeNow is for! Our workshops take place in San Francisco and New York City on the weekends at local tech companies, and are led by top software engineers. We’re currently accepting applications which are due on April 22nd. Still have questions? Trouble viewing the application? <iframe height="500" allowTransparency="true" frameborder="0" scrolling="no" style="width:100%;border:none;"src=" href=" rel="nofollow">Fill out my Wufoo form!

The Python Tutorial — Python v3.0.1 documentation Python is an easy to learn, powerful programming language. It has efficient high-level data structures and a simple but effective approach to object-oriented programming. Python’s elegant syntax and dynamic typing, together with its interpreted nature, make it an ideal language for scripting and rapid application development in many areas on most platforms. The Python interpreter and the extensive standard library are freely available in source or binary form for all major platforms from the Python Web site, and may be freely distributed. The same site also contains distributions of and pointers to many free third party Python modules, programs and tools, and additional documentation. The Python interpreter is easily extended with new functions and data types implemented in C or C++ (or other languages callable from C). This tutorial introduces the reader informally to the basic concepts and features of the Python language and system.

How Can I Protect My Computers and Data When Someone Else Is Using My Network? Dear Lifehacker, After reading how easy it is for someone else to get onto my Wi-Fi network, and, similarly, thinking about how often I let my friends connect to my wireless network, I want to lock down the rest of my network so people connected to it can't go snooping around my computers—or at least secure my most super secret files and folders. What's the best way to go about this? P Thanks, Insecure About Network SecurityP Dear Insecure, We hear you. Set Permissions on Files or FoldersP You can password-protect important files or folders on your computer by editing the permissions settings, which control who can view or edit those items. In Windows, right-click the folder, go to Properties, and open the Security tab. Also don't forget to set up password protection on your network attached storage or any drives shared over the network on your computers.P Encrypt Your Drive or FoldersP The built-in Disk Utility in Mac also is a great tool for protecting folders. Hide your FilesP P.S.

Controlling LEDs with Scratch on Raspberry Pi Scratch is a great programming environment for people of all ages, as it allows the total beginner to create all sorts of interactive programs and fun with a simple graphical environment. You can also run Scratch on a Raspberry Pi, and to make things even more interesting you can now control the GPIO pins from Scratch with the help of the instructions by Scractchmypi. By using a modified version of Scratch, new instrions are available to control the GPIO pins, and thus have some blinky fun with LEDs or perhaps control items of a more serious nature. Either way, it adds to the fun and gives teachers an option to explore basic electronics - so visit the instruction page to learn how. And for more, we're on facebook, Google+, and twitter - so follow us for news and product updates as well. If you're looking for a more permanent way to mount circuitry to your Raspberry Pi, check out our new PiBreak - the prototyping board for the Raspberry Pi.

Gamestar Mechanic Good logging practice in Python | Victor Lin's coding notes In reality, logging is important. When you transfer money, there are transfer records. When an airplane is flying, black box (flight data recorder) is recording everything. If something goes wrong, people can read the log and has a chance to figure out what happened. Likewise, logging is important for system developing, debugging and running. When a program crashes, if there is no logging record, you have little chance to understand what happened. Without the log, I can hardly know what’s wrong if a service goes down. 2011-08-22 17:52:54,828 - root - ERROR - [Errno 10104] getaddrinfo failedTraceback (most recent call last): File "<string>", line 124, in main File "<string>", line 20, in __init__ File "h:\workspace\project\build\pyi.win32\mrdj\outPYZ1.pyz/wx. And eventually figure out that the customer PC is infected by a virus which makes call to gethostname failed. print is not a good idea Although logging is important, not all developers know how to use them correctly. The output: