Tracking in OpenTLD aka Predator — Jay Rambhia. As my Google Summer of Code 2012 project, I have to port OpenTLD to python using OpenCV and SimpleCV. 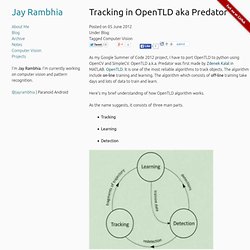 OpenTLD a.k.a. Predator was first made by Zdenek Kalal in MATLAB. OpenTLD. It is one of the most reliable algorithms to track objects. The algorithm include on-line training and learning. Here’s my brief understanding of how OpenTLD algorithm works. As the name suggests, it consists of three main parts. Tracking Learning Detection Tracking: Adaptive Tracking is used in OpenTLD.

“Every tracker eventually fails and requires a detector.” Detection: Classifiers are continuously trained from each and every frame. Learning: The tracker learns using P-N learning (Positive-Negative) which learns an object classifier and labels all the patches as “object”(positive) and “background”(negative).It uses a tracker for providing positive and detector for negative training examples.

I have started working on OpenTLD for couple of weeks now. This is how Median Flow Tracker works: MF Tracker GitHub. Homepage.cem.itesm.mx/carbajal/EmbeddedSystems/SLIDES/Computer Vision/Computer Vision using SimpleCV and the Raspberry Pi.pdf. TLD Vision. Our technology is based on TLD, an award winning algorithm well known in computer vision community and industry. 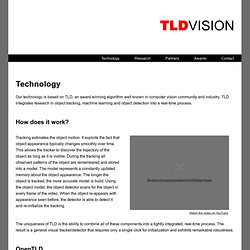 TLD integrates research in object tracking, machine learning and object detection into a real-time process. How does it work? Tracking estimates the object motion. It exploits the fact that object appearance typically changes smoothly over time. This allows the tracker to discover the trajectory of the object as long as it is visible. The uniqueness of TLD is the ability to combine all of these components into a tightly integrated, real-time process. OpenTLD. Cheat Sheet - Physical Computing with Raspberry Pi. Basic GPIO Access Setup Raspberry Pi GPIO pin layout. 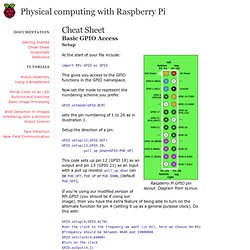 Diagram from eLinux. At the start of your file include: import RPi.GPIO as GPIO This gives you access to the GPIO functions in the GPIO namespace. Now set the mode to represent the numbering scheme you prefer. GPIO.setmode(GPIO.BCM) sets the pin numbering of 1 to 26 as in illustration 1. Setup the direction of a pin: OpenTLD. Disclaimer: This project is now old and will no longer be updated. 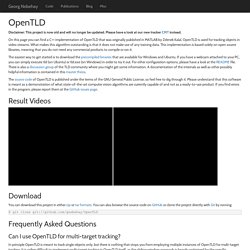 Please have a look at our new tracker CMT instead. On this page you can find a C++ implementation of OpenTLD that was originally published in MATLAB by Zdenek Kalal. OpenTLD is used for tracking objects in video streams. What makes this algorithm outstanding is that it does not make use of any training data. This implementation is based solely on open source libraries, meaning that you do not need any commercial products to compile or run it. The easiest way to get started is to download the precompiled binaries that are available for Windows and Ubuntu. The source code of OpenTLD is published under the terms of the GNU General Public License, so feel free to dig through it. Result Videos Download. Raspberry Pi OpenCV Pan & Tilt Face Tracker. Cross compile Qt + OpenCv + v4l for the pi cam.

Zdenek Kalal. Streaming Raspberry Pi Camera H264 into HTML over RTMP. Pan / Tilt face tracking with the raspberry pi. Object tracking with Pi camera. Dear all , I (as a Pi noobie but interested in electronics) would like to make use of the Pi camera board to track objects. 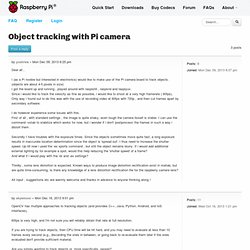 (objects are about 4-5 pixels in size)I got the board up and running , played around with raspistill , raspivid and raspiyuv.Since i would like to track the velocity as fine as possible, i would like to shoot at a very high framerate ( 60fps).Only way i found out to do this was with the use of recording video at 60fps with 720p , and then cut frames apart by secondary software. I do however experience some issues with this.First of all , with standard settings , the image is quite shaky, even tough the camera itsself is stable. I can use the command -vstab to stabilize which works for now, but i wonder if i don't 'postprocess' the frames in such a way i distort them . Secondly I have troubles with the exposure times. Thirdly , some lens distortion is expected. All input , suggestions etc are warmly welcome and thanks in advance to anyone thinking along !