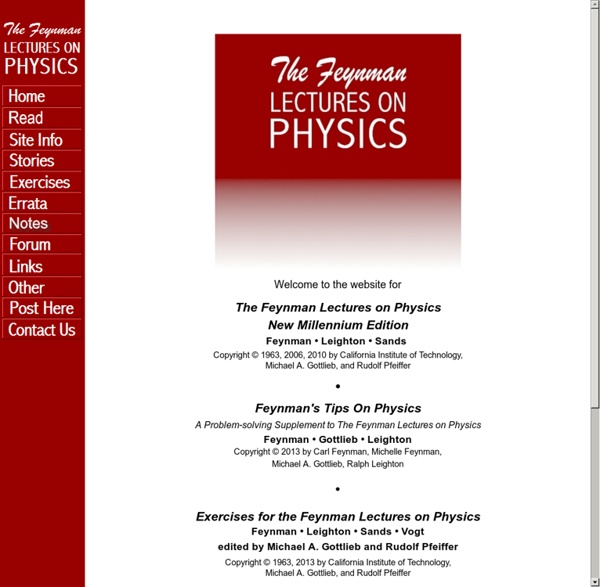 Not enough hours in the day? Scientists predict time will stop completely The theory of time running out was devised by researchers from two Spanish universities trying to explain why the universe appeared to be spreading continuously and accelerating. Observations of supernovae, or exploding stars, found the movement of light indicated they were moving faster than those nearer to the centre of the universe. But the scientists claimed the accepted theory of an opposite force to gravity, known as dark energy, was wrong, and said the reality was that the growth of the universe was slowing.

Physics Flash Animations We have been increasingly using Flash animations for illustrating Physics content. This page provides access to those animations which may be of general interest. The animations will appear in a separate window. The animations are sorted by category, and the file size of each animation is included in the listing. Also included is the minimum version of the Flash player that is required; the player is available free from The categories are: Gerard ’t Hooft, Theoretical Physics as a Challenge by Gerard 't Hooft Note: This web site will soon be removed from its present address. An updated and renewed version is available at: This is a web site for young students - and anyone else - who are (like me) thrilled by the challenges posed by real science, and who are - like me - determined to use their brains to discover new things about the physical world that we are living in. In short, it is for all those who decided to study theoretical physics, in their own time. It so often happens that I receive mail - well-intended but totally useless - by amateur physicists who believe to have solved the world.

Richard Feynman videos Videos This page has been recently updated. The Fantastic Mr Feynman - BBC documentary, May 2013 Feynman's 1984 lecture on Tiny Machines (79 minutes) The 13 Most Important Numbers in the Universe - James D. Stein's Cosmic Numbers In the 17th century, scientists understood three phases of matter—solids, liquids and gases (the discovery of plasma, the fourth phase of matter, lay centuries in the future). Back then, solids and liquids were much harder to work with than gases because changes in solids and liquids were difficult to measure with the equipment of the time. So many experimentalists played around with gases to try to deduce fundamental physical laws. Robert Boyle was perhaps the first great experimentalist, and was responsible for what we now consider to be the essence of experimentation: vary one or more parameter, and see how other parameters change in response. It may seem obvious in retrospect, but hindsight, as the physicist Leo Szilard once remarked, is notably more accurate than foresight.

Usenet Physics FAQ Version Date: February 2018 This list of answers to frequently asked questions in physics was created by Scott Chase in 1992. Its purpose was to provide good answers to questions that had been discussed often in the sci.physics and related Internet news groups. The articles in this FAQ are based on those discussions and on information from good reference sources. They were later maintained and enlarged by Michael Weiss and Philip Gibbs.

Breakthrough in physics may lead to new view of magnetism An artistic representation of a ‘polaron’ – a new quantum state, or a ‘quasiparticle’. The potassium atom in the middle (blue) repels the smaller lithium atoms (yellow). This creates a complex state, which physically can be best described as a quasiparticle (Illustration: Harald Ritsch) What Is the Speed of Sound? Image: Red Bull Stratos This seems to be the most common discussion regarding the recent Red Bull Stratos Jump. Unless you have been living under a rock lately, you have probably seen the awesome jump from 128,000 feet.

Physics Simulations and Artwork Here is a 3D view of a hydrogren atom in the 4f state. The left image was made in C++ using a technique described by Krzysztof Marczak to make it volumetric like a cloud of smoke. The right image was made in Mathematica by adding 2D cross-sectional layers. Relativistic Baseball What would happen if you tried to hit a baseball pitched at 90% the speed of light? - Ellen McManis Let’s set aside the question of how we got the baseball moving that fast. We'll suppose it's a normal pitch, except in the instant the pitcher releases the ball, it magically accelerates to 0.9c. From that point onward, everything proceeds according to normal physics.

Motion Mountain - The Contents of the Free Physics Textbook for Download All volumes of the free physics textbook are written to entertain pupils, students, teachers and everybody who is curious about the world of motion. The first five volumes present established physics. In contrast, the sixth volume is, as the title explains, a research text. Read the volumes online, without download, here. More details on volume I, on mechanics and thermodynamics, are given here. - StumbleUpon A Theory on the Deja Vu or Déjà vu Phenomenon During the time while this web-page has been on the Internet, more than three thousand people (up to Nov 2009) have e-mailed to say that they have Déjà Vu experiences. That is interesting, but their descriptions have virtually always described some different phenomenon. If a person has any pre-knowledge of something that is yet to happen, like in a dream, it cannot be Déjà Vu, and is likely to be some type of Precognition.

Can we manufacture matter?" The Latin phrase "creatio ex nihilo" means "creation out of nothing," and it's largely the domain of theology, philosophy and mythology for a reason: the first law of thermodynamics, which is actually a conservation of energy equation. The gist of that equation, as you no doubt remember, is that energy can neither be created nor destroyed. How does this law affect matter? Albert Einstein theorized that matter and energy are interchangeable. Matter takes up space, has mass and composes most of the visible universe around you. Quantum physicists show a small amount of randomness can be amplified without limit Once again quantum physics gives us philosophical implications: physicists showed how a small amount of randomness can be amplified without limit. Classical physics is deterministic: for example, we can determine the position and velocity of a particle at any time in the future. Quantum theory, on the other hand, states that there exist processes which are fundamentally random: for instance, the outcomes of measurements of quantum particles seem to be determined entirely by chance.