$573 million in pot sales: 12 stats that defined cannabis' year. By Ricardo Baca, The Cannabist Staff We can opine anecdotally on how legal marijuana sales changed Colorado in 2014, and we’ve done just that recently — read my “year in the life of the world’s first marijuana editor” essay here. 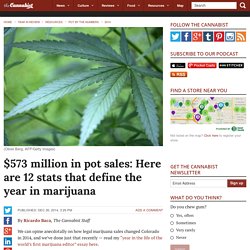 But since we’re journalists we also track down the hard numbers that show legal marijuana’s definitive impact on the state in this first year of recreational pot sales. And a glance at the numbers, statistics and calculations below will give you a very clear picture of what legal, regulated, first-of-its-kind marijuana looks like in the Rocky Mountains. 1. 130.3 metric tons That’s Colorado’s annual demand for marijuana — equal to 36.8 million “eighths” of cannabis flower.Makes you wonder how many Coloradans use cannabis regularly … That’s the number of adults who are 21 and older using marijuana regularly (at least once a month), and it’s about 9 percent of the state’s population.And what about those using more often than that … 3. 23 percent 4. 90 percent 12: Zero.

Colorado marijuana consumption estimated at 130 metric tons. By John IngoldThe Denver Post Posted: 07/09/2014 05:55:54 PM MDT|Updated: about a year ago A grow light shines through the leaves of a cannabis plant at a grow facility in Denver. 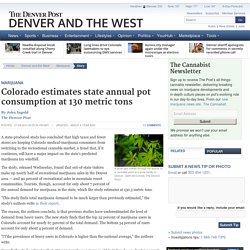 (Seth McConnell, The Denver Post) A state-produced study has concluded that high taxes and fewer stores are keeping Colorado medical-marijuana consumers from switching to the recreational cannabis market, a trend that, if it continues, will have a major impact on the state's predicted marijuana tax windfall. Tourists can now purchase medical marijuana in Las Vegas. It's been 15 years since Nevada voters approved a ballot measure legalizing medical marijuana in the state, but it wasn't until August 24 that the first dispensary opened its doors in Clark County. 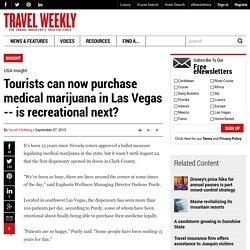 "We've been so busy, there are lines around the corner at some times of the day," said Euphoria Wellness Managing Director Darlene Purdy. Located in southwest Las Vegas, the dispensary has seen more than 100 patients per day, according to Purdy, some of whom have been emotional about finally being able to purchase their medicine legally. "Patients are so happy," Purdy said. "Some people have been waiting 15 years for this. " However, not all of Euphoria's customers are Nevada residents visiting a dispensary for the first time. State Senator Tick Segerblom, who sponsored the bill that led to the legalization of dispensaries, said the state has set up the "gold standard" of medical marijuana programs. "I haven't heard of anything negative," he said. 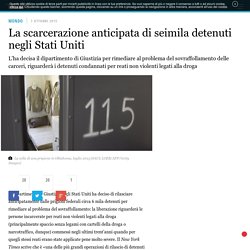 For First Time in History, a State Generates More Annual Tax Revenue From Marijuana Sales Than From Alcohol Sales - MPP. Colorado’s ‘marijuana tax holiday’ on Wednesday will be a ‘much-deserved day off’ — the state raised nearly $70 million from marijuana-specific taxes in FY 2014-2015, compared to just under $42 million from alcohol-specific taxes DENVER — For the first time in history, a state has generated more annual revenue from taxes imposed on marijuana than from taxes imposed on alcohol. 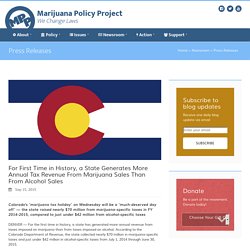 According to the Colorado Department of Revenue, the state collected nearly $70 million in marijuana-specific taxes and just under $42 million in alcohol-specific taxes from July 1, 2014 through June 30, 2015. The news comes as Colorado prepares for a “marijuana tax holiday” on Wednesday, during which the state is suspending marijuana-specific taxes for one day. For a more detailed explanation, view the Associated Press’s coverage at “It’s crazy how much revenue our state used to flush down the drain by forcing marijuana sales into the underground market,” Tvert said. Alcohol sales get higher after weed legalization contrary to industry fears.

Underlying the debate over marijuana legalization has been an equally fierce battle between marijuana and another so-called vice industry: alcohol. 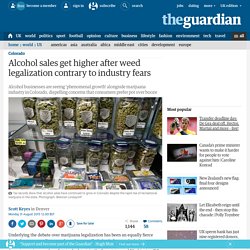 As an increasing number of states look to join the four states and Washington DC in legalizing recreational marijuana, many in the alcohol industry have feared that legalized weed will cut into their existing profits. But a few years into Colorado legalization, alcohol sales are up in the state, and those in the alcohol business have embraced their fellow industry. Frezza.pdf. Unprecedented Changes in Marijuana Policy. The marijuana policy landscape changed dramatically in 2014. 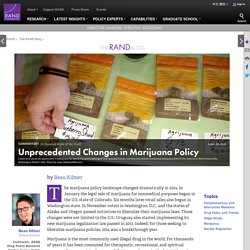 In January the legal sale of marijuana for nonmedical purposes began in the U.S. state of Colorado. Six months later retail sales also began in Washington state. In November voters in Washington, D.C., and the states of Alaska and Oregon passed initiatives to liberalize their marijuana laws. Those changes were not limited to the U.S.; Uruguay also started implementing its new marijuana legalization law passed in 2013. Indeed, for those seeking to liberalize marijuana policies, 2014 was a breakthrough year. Marijuana is the most commonly used illegal drug in the world. In the United States the production, distribution, and possession of marijuana are prohibited by the federal Controlled Substances Act, which was signed into law by Pres.

The prospect of legalizing marijuana in order to permit commercial companies or other types of organizations to produce and distribute it has remained a controversial issue.

Related:  Class Warfare - Pay Attention, America...   -  Ideas worth spreading   -  Drugs   -  Economy   -  Toward a Better World   -  others   -  Legalization of Marjuana   -  The RyanMitt   -  Us and Guns   -  US of A Economy   -  International   -  US of A State, County, & City at Work   -  Corporations as Reprehensible People My Friend   -  nabolom   -  Pot, Marijuana   -  funny &/or interesting   -  Introduction to Data Visualization   -  Introduction to the Changing World of Social Media - workshop   -  Introduction and Chapter One - What is Strategic Foresight?   -  Serious Games Classification and Introduction   -  Introduction   -  Introduction to Node.js and why it's faster than Java   -  Introduction to Earth System Science   -  3C AN INTRODUCTION TO THE MAKER MOVEMENT   -  INTRODUCTION: THE PIPELINES   -  Introduction to AI   -  let's focus Export - Mapping Tools Radar visual literacy.pos   -  Data visualization - Wikipedia, the free encyclopedia   -  The State of the Web - Winter 2010 - The Oatmeal   -  The State of the Web - Summer 2011 - The Oatmeal   -  Statistical Graphics and more » Blog Archive » Statistical Graphics vs. InfoVis   -  Understanding the node.js event loop   -  The state of the web - Spring 2012 - The Oatmeal   -  97% Owned - Monetary Reform documentary - Directors Cut - YouTube   -  The men who crashed the world - YouTube   -  Personalize Learning: 10 Predictions for Personalized Learning for 2013   -  A Printable Guide to Social Media [#Infographic] | EdTech Magazine   -  Ten Tips for Becoming a Connected Educator   -  The Art of Data Visualization | Off Book | PBS - YouTube   -  Advent of Google means we must rethink our approach to education | Education | The Guardian   -  An Absolute Beginner's Guide to Node.js   -  Google for Education   -  Data on Oil, Gas, Mining Projects Often Incomplete, Missing or Inaccessible   -  Education   -  Enterprise