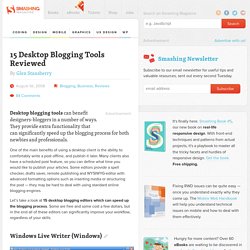 They provide extra functionality that can significantly speed up the blogging process for both newbies and professionals. One of the main benefits of using a desktop client is the ability to comfortably write a post offline, and publish it later. Many clients also have a scheduled post feature, so you can define what time you would like to publish your articles. Some editors provide a spell checker, drafts saver, remote publishing and WYSIWYG-editor with advanced formatting options such as inserting media or structuring the post — they may be hard to deal with using standard online blogging-engines.

Let’s take a look at 15 desktop blogging editors which can speed up the blogging process. Windows Live Writer (Windows) Link Windows Live Writer2 is an impressive blog editor, and is probably the cleanest one. MarsEdit (Mac) Link. 10+ Desktop Apps for Wordpress Publishing. How to choose Linux desktop environment. When you install a Linux distribution, a set of programs comes along with it. 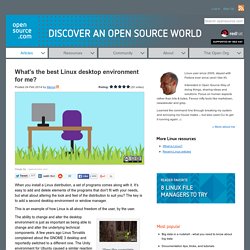 It's easy to add and delete elements of the programs that don't fit with your needs, but what about altering the look and feel of the distribution to suit you? The key is to add a second desktop environment or window manager. This is an example of how Linux is all about freedom of the user, by the user. View the complete collection of Beginners in Open Source articles The ability to change and alter the desktop environment is just as important as being able to change and alter the underlying technical components. Is Mainframe2 the end for desktop computing? VidMasta: A Desktop Application For Searching Movies And TV Shows. Ever wanted to search for a Movie or a TV shows from your desktop or searching for a application to do it for you whenever you want? 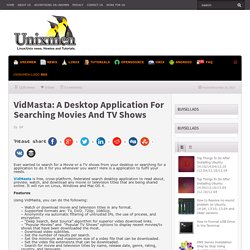 Here is a application to fulfil your needs. VidMasta is free, cross-platform, federated search desktop application to read about, preview, watch, and download any movie or television titles that are being shared online. It will run on Linux, Windows and Mac OS X. Features Using VidMasta, you can do the following: Install VidMasta On Linux Before installing VidMasta you should have install the latest Java in your Linux Desktop. Download the latest version from here. Sudo java -jar vidmasta-setup-16.7.jar The following screen should appear.

Select the installation path and click Next. After completing the installation, click Next. Setup the shortcuts. Finally click Done to finish the installation. Deskman: The Advanced Desktop Security Manager For Restricting Access To PC Settings. Whether you’re a system administrator or a parent who wants more control on a public or group computer, it’s not easy locking down a computer, especially with customized restrictions. 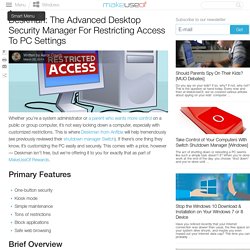 This is where Deskman from Anfibia will help tremendously (we previously reviewed their shutdown manager Switch). If there’s one thing they know, it’s customizing the PC easily and securely. This comes with a price, however — Deskman isn’t free, but we’re offering it to you for exactly that as part of MakeUseOf Rewards. Primary Features One-button securityKiosk modeSimple maintenanceTons of restrictionsBlock applicationsSafe web browsing Brief Overview There are two versions of Deskman: the classic version for one PC that doesn’t need or have network/Internet access, and the network version for multiple PCs that is network-ready, making it accessible anywhere via the web. Get Better Linux Desktop Performance With Ulatencyd. Ulatencyd is a daemon which constantly optimizes the Linux Kernel for best user experience. 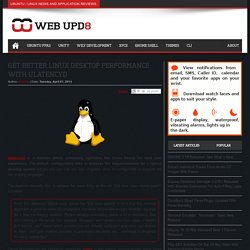 The default configuration tries to increase the responsiveness for a typical desktop system but you can use it on any type of system since it's configurable (it supports the lua scripting language). The daemon basically tries to achieve the same thing as the old "200 lines Linux kernel patch", but better: Chrome's App Launcher Runs Chrome Apps on Your Desktop, Available on Dev Channel Now. Linux Libertine G and Linux Biolinum G for LibreOffice and OpenOffice.org desktop publishing, OpenType to Graphite conversion. Graphite versions of Linux Libertine and Linux Biolinum font families for LibreOffice and OpenOffice.org. 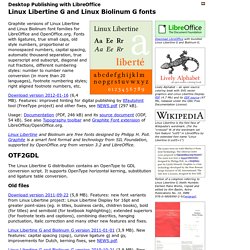 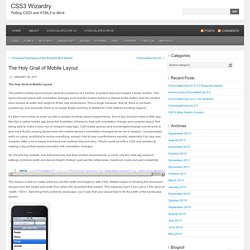 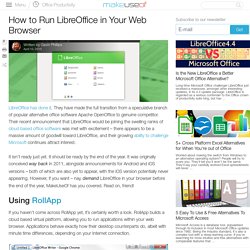 They have made the full transition from a speculative branch of popular alternative office software Apache OpenOffice to genuine competitor. Their recent announcement that LibreOffice would be joining the swelling ranks of cloud based office software was met with excitement – there appears to be a massive amount of goodwill toward LibreOffice, and their growing ability to challenge Microsoft continues attract interest.

It isn’t ready just yet. It should be ready by the end of the year. It was originally conceived way back in 2011, alongside announcements for Android and iOS versions – both of which are also yet to appear, with the iOS version potentially never appearing.