We Make Money Not Art 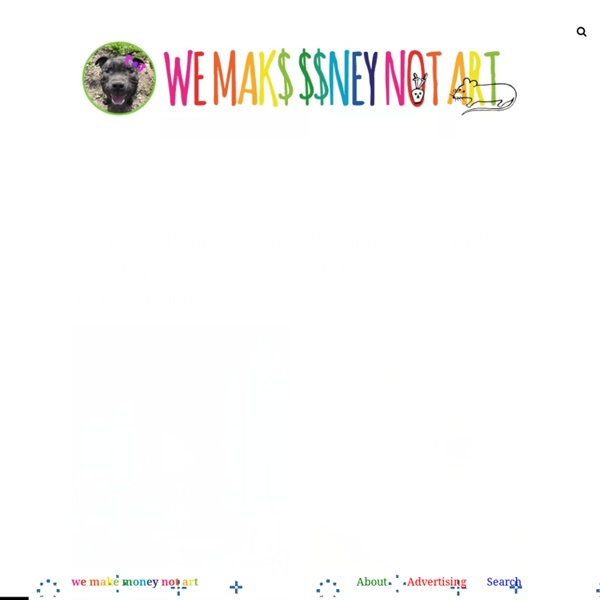 Institute of Critical Zoologists "The work to follow is an exploration of these complexities and reminds us that birds occupy a large and central part of that universe that human beings constantly carve out of nature." Ding Li “In contemporary society birds are, perhaps, both the most watched and most eaten animal on our planet. They have become a focal point of debates about a 'proper' relationship between humankind and nature, and about definitions of humanity itself.” Naoko Noguchi Getting Started With Generative Art Generative art as defined by Philip Galanter is, “Any art practice where the artist creates a process, such as a set of natural language rules, a computer program, a machine, or other mechanism, which is then set to motion with some degree of autonomy contributing to or resulting in a complete work of art.” I became a huge fan of generative art after I went to a presentation by Joshua Davis at Adobe Max. His presentation was on his new experimental work, titled “space”. It was a real treat to see how Joshua pushes himself and his work to the next level. He is by far a master in this area. You can watch the presentation here.

The Soyuz Chair - Nelly Ben Hayoun photo by Nick Ballon PROJECT Developed IN COLLABORATION WITH THE ASTRONAUT JEAN PIERRE HAIGNERE WHO LIFT OFF TWICE WITH THE SOYUZ ROCKET Soyuz was the human spaceflight programme initiated by the Soviet Union in the early 1960s. It was originally part of the Moon-landing programme intended to put a Soviet cosmonaut on the Moon.

Jaemin Paik When We All Live To 150 2012, Jun 1 year Research Project, Mixed media How would family life change if we all lived to one-hundred and fifty or beyond? GHOST in the MACHINE: the marriage of software & art GHOST in the MACHINE the marriage of software & art Defining Generative Art Philip GalanterJared Tarbell Pre-Digital Precedences Dadaist Poetry (Tristan Tzara) 1920 Aleatoric Music (John Cage) 1951 Happenings (Alan Kaprow) 1959 Cut-Up Method (Brion Gysin & William Burroughs) 1959 Instruction-Based Drawing (Sol LeWitt) 1960s Graphic Design Manual (Armin Hofmann) 1965 Olaf Stapledon William Olaf Stapledon (10 May 1886 – 6 September 1950) – known as Olaf Stapledon – was a British philosopher and author of influential works of science fiction.[1][2] In 2014, he was inducted into the Science Fiction and Fantasy Hall of Fame. Life[edit] During the First World War he served as a conscientious objector.[2] Stapledon became an ambulance driver with the Friends' Ambulance Unit in France and Belgium from July 1915 to January 1919; he was awarded the Croix de Guerre for bravery.[5] On 16 July 1919 he married Agnes Zena Miller (1894–1984), an Australian cousin.[2] They had first met in 1903, and later maintained a correspondence throughout the war.

Ant Farm (group) Ant Farm was an avant-garde architecture, graphic arts, and environmental design practice, founded in San Francisco in 1968 by Chip Lord and Doug Michels (1943-2003). Ant Farm's work often made use of popular icons in the United States, as a strategy to redefine the way those were conceived within the country's imaginary. We wanted to be an architecture group that was more like a rock band. Personal 3D Printers Submit additions and corrections to the 3D Printing Directory The world of 3D printing has exploded over the past decade, and that includes personal printers. This rapid expansion has been accelerating so quickly that it can be difficult keeping track of the market, what with technological advancements occurring near daily combined with the power of Kickstarter.

Archigram Peter Cook presents Archigram's project of “Plug-in City” Archigram agitated to prevent modernism from becoming a sterile and safe orthodoxy by its adherents. Unlike ephemeralisation from Buckminster Fuller which assumes more must be done with less material (because material is finite), Archigram relies on a future of interminable resources. The works of Archigram had a neofuturistic slant being influenced by Antonio Sant'Elia's works. .: Neighbourhood Satellites :. Even before the Internet of Things becomes reality, the Internet of Animals is already proclaimed. Big animal data is collected in real time, and people follow individual wolves, birds and sharks online. At the same time, nature moves physically into the urbanised areas of people. Since the industrial revolution there has been a growing separation between nature and the human living environment. Now, with digital technologies, there are new possibilities and attempts to bridge these separations again and making contact.

Ian Ingram Marvelous Meat (2016) Doctor Maggotty is Anxious about The End (2015) Lizardless Legs (2014) Bueropflanze Büropflanze “Büropflanze” (office plant) is a seemingly scientific research project on the German office fauna. In contrast to holiday postcards, family photographs or other attempts of people to personalise the impersonal office architecture, plants grow – in part unnoticed, in part under loving observation and care – up to the ceiling, behind the heater and through the blinds. They can only be controlled to a certain extent. And yet they are dependent; they must be watered and cared for.

Transnatural Art & Design - Balancing Nature & Technology - ROBOTANICA ___ It seems we are witnessing a shift in time with the arrival of robotic creatures and evolved hybrid species in the natural environment. Robotanica deals with the arrival of robotics in nature and exposes, questions and investigates projects that effectuate surroundings. Is it possible to solve the extinction of animals or plants by replacing them with (half) robotic versions? How can robotics support as well as enrich both mankind and nature to overcome environmental damage caused in the past? And how do we deal with this new, networked, wilderness and its evolution? Robotanica delves into various perspectives and aspects of these new creatures that (going to) inhabit our surroundings with artists, designers and scientists.