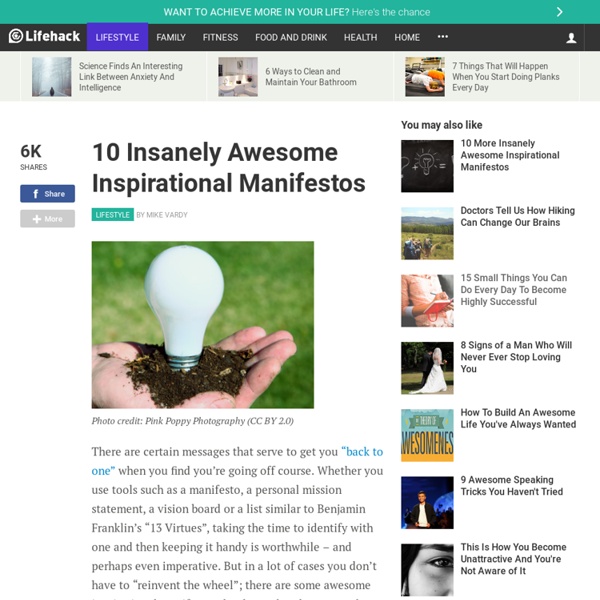 There are certain messages that serve to get you “back to one” when you find you’re going off course. Whether you use tools such as a manifesto, a personal mission statement, a vision board or a list similar to Benjamin Franklin’s “13 Virtues”, taking the time to identify with one and then keeping it handy is worthwhile – and perhaps even imperative. But in a lot of cases you don’t have to “reinvent the wheel”; there are some awesome inspirational manifestos that have already put out there for you to look at and use as a means to set you back on course. 1. This is one of the best known ones on the web. 2. Baz Luhrman, best known as the director of films like “Strictly Ballroom” and “Moulin Rouge!” 3. the lululemon manifesto The corporate manifesto for thsi athletic wear company may very well be a bellwether for a shift in the culture of the new enterprising set. 4. While this one may be directed at women in business, it certainly can apply to a much larger demographic. 5. 6. 8. 9. focus Related:  Inspiration

Bre Pettis | I Make Things - Bre Pettis Blog - The Cult of Done Manifesto Dear Members of the Cult of Done, I present to you a manifesto of done. This was written in collaboration with Kio Stark in 20 minutes because we only had 20 minutes to get it done. The Cult of Done Manifesto There are three states of being. Update: James Provost made the awesome poster for the Cult of Done Manifesto. And Joshua Rothaas made this poster. Benjamin Gaulon aka (я) | Recyclism and Collaborators :: Hardware Hacking / Recycling / Physical Computing The man who invented the Hollywood schlock machine The Proposal is formulaic. The Taking of Pelham 1 2 3 is formulaic. Imagine That is formulaic. Even Up is … "progressively more formulaic." But who came up with the formula? If you want the human embodiment of Hollywood predictability, you can't do better than Wycliffe A. It was a notion borne of failure. DeMille's prodding was perfectly timed; Hill wandered into a bookshop and found the new translation of French critic Georges Polti's Thirty-Six Dramatic Situations. What if together they made … a formula? Hill's Ten Million Photoplay Plots: The Master Key to All Dramatic Plots, a byzantine matrix of characters and conflicts designed to create endless plot combinations, was so novel when it debuted in 1919 that the slim guide sold for an eye-popping $5. There's plenty of quaint advice: Throw a punch in the first 200 feet of film; introduce a love interest within 500 feet. Hill wasn't about to lie down and take … well, whatever the hell this was. Perhaps that just proves his point.

50+ Personal Productivity Blogs You've Never Heard of Before (and about a dozen you probably have) The personal productivity niche on the Web has grown by leaps and bounds since Lifehack launched only a few years ago. While a few sites dominate the rankings, there are lots and lots of lesser-known sites that are as good or even better than the “A-list” productivity blogs. Most of them are solo operations — the GTD newbie documenting his or her quest for greater control over their life, the coach or consultant sharing his or her knowledge with the world, the writer adding to his or her published work with notes, errata, and new findings. Their voice is personal, intimate even — and deserves to be heard. Of course, the big names are here too — after all, I owe some of them a tremendous debt for helping me get a grip on my own life. Enjoy! 43 Folders: Merlin Mann started a lot of us on this journey, so now he has to pay. Do you know any productivity blogs that the world should know about? Read full content

7 Things Extremely Happy People Do Every Single Day How do you achieve sustainable happiness? In a world that puts end-based and goal-oriented happiness first, it's a genuinely valid question. However, it turns out that the secrets to consistent happiness might be closer than we think. Here are seven things the happiest folks do every day you should be incorporating into your daily routine. 1. Other than making your body feel great, exercise also helps your brain. 2. We choose what we eat, what we don't eat, and all the good and bad things we do to our bodies. 3. Happy people don't let life's punches get them down too hard. 4. Thoreau was a firm believer in immersing ourselves into the natural world. 5. We derive the most pleasure from social interactions when we have a deeper connection to the people with whom we are interacting. 6. It's easy to complain. 7. We often do not realize that we have the power within us to change a bad mood to a good one.

Bear 71: A Real World Multi-User Experience  You’ll know by now I’m a huge advocate of digital convergence, and this piece is one of the very best I’ve ever seen, it takes the concept to new heights… It’s called Bear 71, an interactive, multi-user documentary experience and installation that debuts at the Sundance Film Festival. Bear 71 Live observes and records the intersection of humans, nature and technology in a live, Internet connected event. Questioning how we see the world through the lens of technology, this multi-user, interactive story blurs the line between the wild world and the wired one, and allows users to explore the bear’s natural habitat in a number of very cool ways, including the Nature grid, though an array of motion sensors, live streaming web cams, GPS equipment and the like… It launch last weekend to 30,000 visits a day without any paid media. Be Sociable, Share!

Henry Miller's 11 Commandments of Writing & Daily Creative Routine After David Ogilvy’s wildly popular 10 tips on writing and a selection of advice from modernity’s greatest writers, here comes some from the prolific writer and painter Henry Miller (December 26, 1891–June 7, 1980) COMMANDMENTSWork on one thing at a time until finished.Start no more new books, add no more new material to ‘Black Spring.’Don’t be nervous. Work calmly, joyously, recklessly on whatever is in hand.Work according to Program and not according to mood. Stop at the appointed time!When you can’t create you can work.Cement a little every day, rather than add new fertilizers.Keep human! Under a part titled Daily Program, his routine also featured the following wonderful blueprint for productivity, inspiration, and mental health: MORNINGS: If groggy, type notes and allocate, as stimulus.If in fine fettle, write.AFTERNOONS:Work of section in hand, following plan of section scrupulously. HT Lists of Note

The 100 Best Lifehacks of 2011: The Year in Review Another year is coming to a close this weekend, and it’s been a banner one here at Lifehack. As you’ll see below, one of our most popular posts of 2011 was our 100 Best Lifehacks of 2010 article, which flows nicely into this post which will outline the 100 Best Lifehack of 2011. Unlike last year’s list, there’s a few changes we put into place before delivering this list to our readers. First off, the overall top 10 posts are determined by overall traffic during the past year, as well as engagement on social networks. The articles come from a wide variety of our website’s categories, whereas the remaining 90 articles are divided up into the primary categories that we write about at Lifehack: Communication, Lifestyle, Management, Money, Productivity and Technology. Those 90 posts were decided on based on visits to each article, social media interaction, comments and then were finally curated by the Lifehack editorial team. You’ve got a lot of reading to do here, os let’s get started… Money

16 Goals To Set For Next Year That Are More About Enjoying What You Have Than... Milestones are markers that you’re evolving – they do not create emotional fulfillment in the way we think they will. This confusion is why with the dawn of each new year, our resolutions are to change our lives, rather than to change ourselves. But what if we made goals that were more about loving what we have rather than chasing what we don’t? What if we realized that it’s what we were seeking in the first place? It’s something to consider – if not even try just a little. Here, a few ideas to get you started: 1. 2. 3. 4. 5. 6. 7. 8. 9. 10. 11. 12. 13. 14. 15. 16.

iA Writer Quotes, Quotes, Quotes Yep, I’ve been spending time surfing around the web and Pinterest again. Enjoy!!! click the quote to go to the source. Just a little reminder to take chances Love this!!! Love the photo with this quote. Fifteen Things for When the World is Shitty and Terrifying. | I Am Begging My... Laquan MacDonald was seventeen and murdered by a Chicago police officer in cold blood. I watched a video of his murder, along with most of America, right in between reading about how Americans are terrified of letting refugees from war-torn Syria into the country, and reading about how a man with a rifle opened fire at a Planned Parenthood in Colorado yesterday. I can’t think of anything else to say that hasn’t already been said about how horrible and sad and awful and bleak and shitty and unfathomable all of those things are. I can’t. Open your closet. 2. running around playing. If you see a parent looking stressed out, give them an encouraging smile, as if to say, “You’re doing a great job.” 3. 4. again. 5. 6. 7. 8. 9. 10. 11. 12. 13. 14. 15. Think about all the times you got busy, and didn’t visit your relatives like you said you would, or didn’t give the dollar in the checkout line because times are rough and who even knows what the March of Dimes is. Close your browser window.