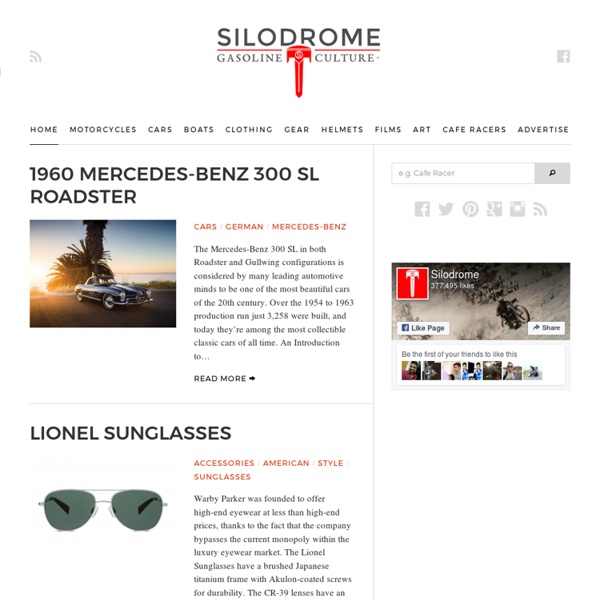 Porsche 356A Carrera 1500 Speedster by Reutter The Porsche 356A Carrera 1500 Speedster is a car that was a revelation in its day, the exceedingly punchy and surprisingly reliable four-cam, air-cooled flat-four had powered the 356s sister car, the 550 Spyder, to a slew of race wins and podiums in the mid-1950s and so Porsche decided to fit a version of the… Read More Military Duffle Bag by Whipping Post The Military Duffle Bag by Whipping Post was inspired by the original duffle bags used by military personnel in conflicts throughout the 20th century. The bags are able to hold surprising amounts of gear and the shoulder strap makes it easy to carry over long distances.

10 Words Backpacking In Thailand Changed for Me Things change when you travel. There’s no doubt about that. But when you leave, you figure you have all the basics figured out – until you enter a country that’s so foreign to you that you have no choice but to sit up, pay attention, listen and learn. I spent nine months overseas, mostly in Australia, but my two weeks in Thailand are what stayed with me the most. 1. Luxurious Travel Cheap And Travel Young: 10 Countries You Can Visit On A College Budget With the travel season upon us, it’s time to begin exploring again and creating memories that last. Like everyone else, I’m pretty much broke and can’t afford to go on a luxury trip across Europe, but just because the university takes all my cash doesn’t mean I can’t still travel. Here is a list of 10 countries that rank on the low-end for cost right now: Bolivia

Brit Iron Rebels Worldwide The Twenty-one has always been both loved and hated, I love the big ass it has, but just as many people hate it. It has a 350cc (or 21ci) engine and was called the “Twenty-one” to commerate the 21 year Triumph Engineering Company anniversary. Triumph produced these from 1957 – 1966, though the latter years saw it without the bathtub and a 500cc version was also introduced in 1959. As I understand it the bathtub was intended to be weather protection for the bike. It never went over well in the US and most of the rear fenders were discarded over the years. So finding an intact Twenty-one is a rare thing these days. It’s More Difficult To Jump Than To Fall: Failure Is The Easy Part How amazing would it be if winning were easy? Winning, coming out on top and considering yourself successful all take much effort. In fact, if winning isn’t a challenge, then you didn’t really win, did you?

20 Amazing Hotels You Need to Visit Before You Die 30.5K Flares Twitter 99 Facebook 30.2K Google+ 40 Pin It Share 111 111 Email -- Email to a friend 30.5K Flares × Take a look at some of the most amazing hotels in the world. Not everyone can afford holiday in one of these locations, however most of us would love to spend quality time with family or friends in these places. You might want to stay in the room underwater or perhaps enjoy your breakfast from the cave facing the sea. Credits: Bored Panda Everyone will find something interesting.

Journal — Iron & Air Magazine I think we all take ourselves a little too serious sometimes. I mean, we play with toys for a living! Granted, not all toys are alike. Take this one in particular. CHNSA » radar reflector Radar Reflector As we are flying whats classed as a medium balloon by CASA and we are outside populated areas where Secondary Surveillance Radar (SSR) is used to track aircraft, our balloon needs to carry a radar reflector. This will allow radar equipped planes to see our balloon on radar.

Todd Blubaugh's Blog The Big Apple November 25th, 2013 Sometime back in September Ethan and I rode to New York City. The goal was to see the Atlantic Ocean. I’m glad I took all these photos because I hardly remember the event. I wish my tires could talk so I could ask them if all of the food, beer, babes, bikes and babes really happened? Most "super" supermoon of 2014 on August 10 Above image contrasting largest and smallest full moons: Stefanao Sciarpetti Full moon falls on August 10, 2014 at 18:09 UTC (1:09 p.m. CDT in the U.S.). This full moon is not only the closest and largest full moon of the year. It also presents the moon’s closest encounter with Earth for all of 2014. The moon will not be so close again until the full moon of September 28, 2015.

BMW R100RS Custom By C59R Cafe Racer Motorcycles Spain - Moto Rivista The GranDream, which as its name suggests is its owner’s dream come true, is a classic-style Cafe Racer for everyday use. As with all C59R projects, the first thing that grabs your attention about this BMW R100RS custom Cafe Racer is its impeccable finish. The top quality chrome, flawless burnished aluminum, stainless steel bolts & fasteners and detailed workmanship on each and every one of its parts is what distinguish this bike.