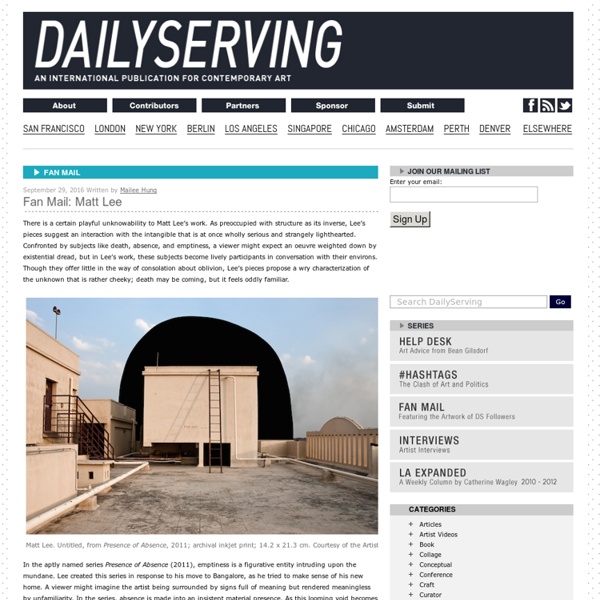 “When is it okay to work for free? Is it acceptable as long as you’re working with—or for—another artist? What is an artistic service?” These are some of the questions raised by Shannon Jackson, director of UC Berkeley’s Arts Research Center, in her introduction to Art Practical‘s latest issue, Valuing Labor. She notes, “These are just a few of the hundreds of questions circulating for artists working in the 21st-century economy, a scene in which the very old question of art’s financial contingency arguably has a different kind of urgency and opacity.” Today we bring you just one of the many features in this issue, a primer put together by Jackson and co-organizer Helena Keeffe that serves as an overview of the topics that will be presented at the Arts Research Center’s day-long Practicum titled Valuing Labor in the Arts, to be held on April 19, 2014.

Profile - 032c Workshop Finding the new in the old and the old in the new, it is considered the “Berlin magazine that propagates an aesthetic of brutal elegance” by the Frankfurter Allgemeine Zeitung, or simply as the “revue ultra-pointue” by Vogue Paris. The magazine fuses art and architecture, literature, urban studies and fashion in ways that can make one forget how depressing a visit to the newsstand has become.” The New York Times→ more Press Coverage Founded in 2000 in Berlin, 032c is edited by Joerg Koch and art directed by Mike Meiré. It is distributed to 29 countries and can be found in select art bookstores, fashion boutiques, and newsstands worldwide (also in our Store). 032c Workshop / Joerg Koch is an exhibition space in Berlin-Kreuzberg.

Fashion Internships – For the student or graduate of fashion, it would be fair to say breaking into the London fashion scene is high up on the â€˜to-doâ€™ list.Â Alongside Paris, Milan and New York, London claims the title of being one of the fashion capitals of the world, harbouring some of the most sought-after designers and never failing to produce fresh talent each year from some of the most prestigious fashion schools and colleges.Â Itâ€™s such a highly sought-after career path that it seems like the young and inexperienced are willing to undergo exploitation in order to secure their dream job. If you are looking for a fashion internship, fear not! Using a reputable internship agency is a safe way to ensure your work experience is a beneficial undertaking. Thoughts on Art and Teaching Last year several websites posted articles about the research of David B. Hay and co-researchers (Darren Williams, Daniel Stahl, Richard Wingate) who published a paper investigating the drawing styles of undergraduates, trainee scientists, and leading neuroscience researchers when making drawings of neurons. The following image shows the three sets of drawings. The upper line was produced by undergraduate students and shows a close adherence to textbook diagrams whilst the mid line was produced by PhD students and postdoctoral researchers more familiar with neurons under the microscope.

Art Contextually it’s pivotal, an artistic exploration of the metaphysical, developed in the digital; all rhymes aside, Los Angeles based artist Anthony Gargasz,’s new collection ‘Metallic Faces’ simply cannot be ignored for these three reasons. Fifteen years ago there was no such thing as ‘Photoshop art’. The thought that art could be generated on computers would have made traditionalists cringe. However, what Anthony has managed to achieve by using his background in digital design is breathtaking and its art in the finest sense of the word. His work is far more than simply ‘generated’, instead it’s an array of elaborate details carefully constructed, layer upon layer to create clean and unique imagery. Anthony follows the exact same artistic progression as somebody who paints, sculpts or draws yet the main point of difference is that his tools are a keyboard, mouse and drawing tablet.

MOUSSE CONTEMPORARY ART MAGAZINE Recently, the Miami-based artist Jillian Mayer shared with me selfeed.com, a project that she, Erik Carter, and Tyler Madsen premiered in January 2014 at the Utah Museum of Fine Arts. The site is a real-time stream of images tagged #selfie on Instagram, a continuous cycle of faces from around the planet, at all hours, in all poses, in any number of social configurations: lonely teens in bathrooms, group shots in hallway mirrors, couples at dinner, bros at the game. The stream moves too quickly for any one selfie to stand out. Instead, faces race across the screen, blurring into one another, smiles, eyes, facial hair, until a single, delirious visual object seems to emerge—one that John Kelsey recently described as “our finest and final hallucination, the ultimate transitional object” in the “bright ruins of a constantly refreshed now.” [1] The selfie has migrated across platforms and is now the most common, if not essential, unit of all social media. DIS, Courtesy: DIS Magazine

Ingredients for an Artful Life Many people say that "The Wire" was the greatest show ever written, with the possible exception of "Breaking Bad." Seth MacFarlane even pokes fun at the series’ reputation in an episode of "Family Guy." Since there is no definitive test to determine which is actually the greatest, I'd say a reference in an American, pop culture-themed sitcom provides some credibility. However, many TV fans have been discussing "The Sopranos" recent success in topping the Writer's Guild of America’s "101 Best Written TV Series" list. With "The Wire" coming in at #9, and "Breaking Bad" shortly behind at #13, the young and hot (and sexy) "Game of Thrones" sits back at #40. Graphic Design daily selection » Art William Leavitt – THE PARTICLES (of White Naugahyde) April 10th, 2014 Make Your Own Press – Almost a Centimeter The book Almost a centimeter is the result of Make Your Own Press, a collective effort of 5 professors and 16 students from 3 distinct academies in the Baltic and Nordic region, and 5 visiting lecturers and critics, invited because of their outstanding efforts in the field of artist book making and publishing. The book emerged from a course that recognizes the explosion in artist book making all around the world, especially in lieu of the less than terminal death of print predicted now for many years.

Module R Blog Francis Bitonti is pushing the boundaries of 3D printed fashion with his Bristle Dress, a look-at-me-now skirt that you can print at home. And given that you probably can’t ever sit down without crushing it that’s probably about as far as you’ll want to go with it on. Leaving details like this aside, this design tour de force is one more example of where creative 3D printing can go when the imagination is unfettered by the weight of convention. The example of the Bristle Dress (or should we call it Brittle Dress?) illustrated here was made entirely on a MakerBot Replicator 2, a desktop 3D printer designed for home use. Not only can you produce Bristle yourself, you can also customize the design because the files for the skirt are available and easily customizable on Thingiverse.

Moving Target Visual art and poetry have long been cross-fertilizing forces in the Bay Area. Much of this history is well known and well-documented. Think of the wild sociality of Beat painters and poets in North Beach or the multidisciplinary scene that gathered around 80 Langton Street in the late 1970’s, to name just two moments in time. Other instances, although no less transformative in their own right, have been less documented. Here, local artist and curator Margaret Tedesco’s venue-hopping series, Moving Target, which brought performance, sound, and visual artists together with local writers, comes to mind. But perhaps because its most famous examples are now well accounted for, or because it has long been somewhat routine, such cross-pollination is often taken for granted.

Algorithm Ink What is Algorithm Ink? How to use? Read the Context Free documentation, or just browse some of the other pieces of art and look at their source code. Not everything from Context Free is supported—like comments, z-depth, and *—but some new things are available, like MOUSECLICK, and MOUSEMOVE. Artmagazine North by North March 30th, 2009 Scandinavian Graphic Design 24 Unforgettable Advertisements Why should ads be boring? Check out this collection of unforgettable advertisements from around the world. Nissan Cube Advertisement Break Glass in Case of Adventure. [link] Nike Cars Advertisement About The Hundreds is the world’s first social merchandising company. Now in its 11th year, the global brand is a 2-part lifestyle project that houses both a clothing line and online-magazine. Co-founded by Ben and Bobby Hundreds in 2003, both ends of The Hundreds incorporate our trademark attitude and personal perspective on street subculture, with an emphasis on people over product. The Hundreds apparel is inspired by LOS ANGELES LIFESTYLE / CALIFORNIA CULTURE and Southern California’s skateboarding, surf, punk, and hip-hop cultures. The design is reminiscent of 1980s surf-culture t-shirts, independent skateboard company apparel of the 1990s, and the advent of “streetwear” at the end of the millennium. The line is comprised of graphic t-shirts, denim, wovens, fleece, outerwear, headwear, and accessories.