The Creative Finder: Find Anyone from Anywhere on The Search Engine for Creatives 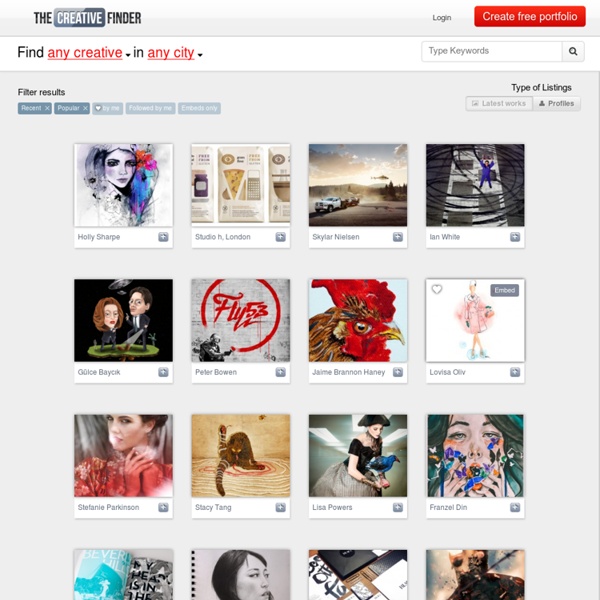 10 Laws of Productivity You might think that creatives as diverse as Internet entrepreneur Jack Dorsey, industrial design firm Studio 7.5, and bestselling Japanese novelist Haruki Murakami would have little in common. In fact, the tenets that guide how they – and exceptionally productive creatives across the board – make ideas happen are incredibly similar. Here are 10 laws of productivity we’ve consistently observed among serial idea executors: 1. Break the seal of hesitation. Fine art Fine art, from the 17th century on, has meant art forms developed primarily for aesthetics, distinguishing them from applied arts that also have to serve some practical function. Historically, the 5 main fine arts were painting, sculpture, architecture, music and poetry, with performing arts including theater and dance.[1] Today, the fine arts commonly include additional forms, such as film, photography, conceptual art, and printmaking. However, in some institutes of learning or in museums, fine art and frequently the term fine arts (pl.) as well, are associated exclusively with visual art forms.[citation needed] The word "fine" does not so much denote the quality of the artwork in question, but the purity of the discipline.

Lateral Thinking Problems - Semantics Lateral thinking problems that require you to pay close attention to the exact wording of the problem. 1. A woman gave natural birth to two sons who were born on the same hour of the same day of the same month of the same year. But they were not twins and she had no access to a time machine. How could this be? Solution: They were two of a set of triplets (or quadruplets, etc.)

A Quick Course in Creativity by Paul McNeese This quick course in creativity is designed to give you a platform to stand on as we look at the various ways you can handle home, social and workplace situations, job-search details and career-path decisions. Let's examine what creativity might look like. Sweet Station Zemer Peled Peled was born and raised in a Kibbutz in the northern part of Israel. After completing a BA (Hons) at the Bezalel Academy of Art and Design in Jerusalem she graduated with an MA (Hons) from the Royal College of Art. In recent years her work has been featured nationally and internationally in museums and galleries including Sotheby’s and Saatchi Gallery-London, Eretz Israel Museum-Tel Aviv and the Orangerie du Senate, Paris among others. Zemer Peled’s work examines the beauty and brutality of the natural world. Her sculptural language is formed by her surrounding landscapes and nature, engaging with themes of nature and memories, identity and place.

How to Find Your Creative Sweet Spot nice try. the research cited doesn't back up the claims made, let alone the prescription. You're likely most creative when you're groggy: The cited study didn't actually measure creativity. Creative problem solving is typically assessed by the use of ill-defined problems, which don't have a clear, or single, right answer. Insight problems like those used by Wieth & Zacks incorporate logic and have a single right answer. Being drunk helps creativity: This study measures "creativity" using the remote associations test, which isn't actually a good measure of creativity, but rather verbal fluency. See: Ochse, R. Victor Enrich Creates Playful And Surreal Architecture Fictions A few weeks back we posted about Filip Dujardin’s digitally manipulated buildings, which gave buildings found in and around Ghent, Belgium an Escherian spin. And since then we’ve come across another photographer, Victor Enrich, who likes to bend reality by turning architecture into surreal playgrounds by forming buildings that, while fiction, are sometimes reminiscent of Frank Gehry‘s iconic, if controversial, designs. Where Filip Dujardin’s manipulations were subtle and implausible in their re-imaginings, the images below are far more outlandish. Buildings are bent over like a concertina or plonked down on the beach, stairways lead off into the sky, high-rise apartments have grown bull horns, and houses are completely tipped over with roofs sitting at ground level.

To be a world explorer by Maria Popova “Every morning when we wake up, we have twenty-four brand-new hours to live. What a precious gift!” As a longtime fan of guerrilla artist and illustrator Keri Smith’ s Wreck This Box set of interactive journals, part of these 7 favorite activity books for grown-ups , I was delighted to discover her How to Be an Explorer of the World: Portable Life Museum ( public library ) — a wonderful compendium of 59 ideas for how to get creatively unstuck by engaging with everyday objects and your surroundings in novel ways. The Brainstormer - The Brainstormer by Andrew Bosley The Brainstormer9/16/13: Brainstormer Facebook Page Read reviews of the app and see what others are doing with the Brainstormer! Visit, "like it", and pass it along! 9/16/13: More wheels! New features!

Why Creative People Sometimes Make No Sense Photo by Sophia. I’ve been having an insightful shuffle through Mihaly Csikszentmihalyi’s book Creativity: The Work and Lives of 91 Eminent People. Mihaly is a seminal professor of Psychology and Management, and is the Founding Co-Director of the Quality of Life Research Center at Claremont. He writes: