100 Ways to Discover and Enjoy Music 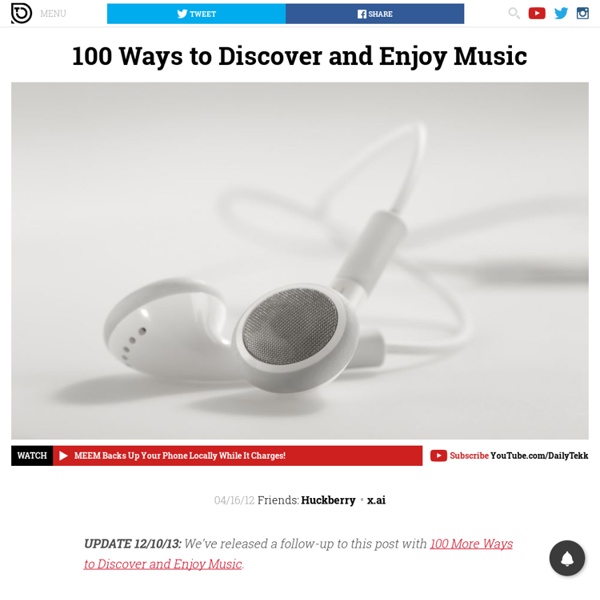 UPDATE 12/10/13: We’ve released a follow-up to this post with 100 More Ways to Discover and Enjoy Music. Prepare yourself for another dose of Monday roundup madness! It’s time for another crazily comprehensive, yet carefully curated, look at an entire industry–the music industry to be specific. This if the first in a two-part series on the music industry which will conclude next week. This week’s focus is on the consumer side of music. Below you’ll find the best resources for music fans including ways to discover new tunes, the best tools and services for creating a perfect music listening experience, tons of concert and live show resources, many ways to enhance Spotify, social tools for getting down with your friends, iPhone and Android music apps, music locker (cloud) services and finally some miscellaneous resources that you’re bound to love. You might also like: exfm – See what’s trending. There’s more to this article!

Spectacular Images of the Insides of Musical Instruments March 9, 2012 at 6:14am | by AP These ads by Bjoern Ewers for the Berlin Philharmonic show the insides of orchestral instruments in such a way as to make it seem like we are standing in spacious halls (or in the case of the flute, a spacious tunnel)… Via: Boing Boing Guitar Tabs and Chords Sign In Favorites GUITAR, BASS AND DRUM TABS WITH RHYTHM About Help Submit Tab Android iOS Songsterr Plus Music, Arts & Culture : Free Audio : Download & Streaming collection eye Listen to this collection of 78rpm records and cylinder recordings released in the early 20th century. These recordings were contributed to the Archive by users through the Open Source Audio collection. 20 fantastic ways to find new music that you like (no Last.fm & Pandora inside) OK, everybody knows that Last.fm & Pandora are great services, but there are a lot of other tools that can help us to find new cool music. Some of them just expose daily musical goodies, others make recommendations based on your very own preferences, and others take the web interactivity ever further. Explore the best 20 ways to discover new music in a web 2.0 world. Live music discovery Wonderwheel Wonderwheel is a new tool that aims to help you find similar artists with the ones you like.

Cello 2.0: Will innovative design turn more people into musicians? Image courtesy Bayer MaterialScience One curious design innovation on display today through October 23 at K 2013, the world’s largest plastics trade show in Düsseldorf, Germany, is a prototype for a cello that looks like the 23rd-century ghost of the classic wooden 17th-century instrument. The 150-year-old German polymer giant Bayer MaterialScience has fashioned the “futuristic cello” from utterly transparent, lightweight cast resin. The company's aim was to encourage aspiring musicians to take up the cello by making what is normally a rather cumbersome instrument easier to play and carry. And to entice accomplished musicians by creating a cello body that acts as a blank canvas for a range of optical effects using integrated technology. Photo courtesy Bayer MaterialScience

100 Greatest Cooking Tips (of all time!) 1. Remember, y'all, it’s all about the prep. Take away the stress by doing the prep the night or day before. You'll look like a star.Paula Deen Paula’s Best Dishes 2. The smaller the item, the higher the baking temperature. The 50 Best Full Albums Free Online The following list is of the most popular full albums available for free on youtube. Have you ever just needed something to put on while you do a task but couldn't think of what to listen to at the time? Try using this list to find the music you know and to experiment with the music you don't. 1. Violent Femmes - FULL ALBUM