The Illusion of Time. Space and Time into a single Continuum. Gravity - From Newton to Einstein - The Elegant Universe. Brian Cox visits the world's biggest vacuum chamber - Human Universe: Episode 4 Preview - BBC Two. The Hammer and the Feather. Physicists have observed the light spectrum of antimatter for first time. After two decades of trying, physicists at CERN have reported the first ever measurement of the light emitted by an antimatter atom, revealing that antihydrogen is the exact mirror image of regular hydrogen. 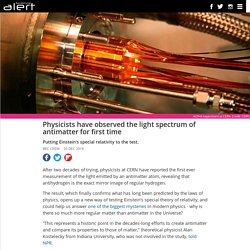 The result, which finally confirms what has long been predicted by the laws of physics, opens up a new way of testing Einstein’s special theory of relativity, and could help us answer one of the biggest mysteries in modern physics - why is there so much more regular matter than antimatter in the Universe? "This represents a historic point in the decades-long efforts to create antimatter and compare its properties to those of matter," theoretical physicist Alan Kostelecky from Indiana University, who was not involved in the study, told NPR.

Demonstration of the Physics of Inertia. Leibniz’s Metaphysics. This essay on Leibniz’s metaphysics is from Chapter 13 of Metaphysics and the Meaning of Life (2010), reprinted here with permission. 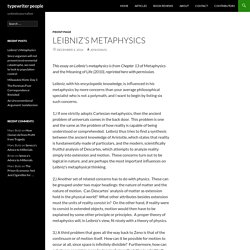 Leibniz, with his encyclopedic knowledge, is influenced in his metaphysics by more concerns than your average philosophical specialist who is not a polymath, and I want to begin by listing six such concerns. 1.) If one strictly adopts Cartesian metaphysics, then the ancient problem of universals comes in the back door. This problem is one and the same as the problem of how reality is capable of being understood or comprehended. Leibniz thus tries to find a synthesis between the ancient knowledge of Aristotle, which states that reality is fundamentally made of particulars, and the modern, scientifically fruitful analysis of Descartes, which attempts to analyze reality simply into extension and motion. 2.) 3.) 4.) 5.) Vantablack Sphere. The End of the Rainbow: What Can We Say About the Extragalactic Sub-Megahertz Radio Sky? China launches world's first quantum science satellite from Jiuquan. China has launched the world's first quantum science satellite designed to test the possibilities of quantum communications and verify the fundamental laws of quantum mechanics. 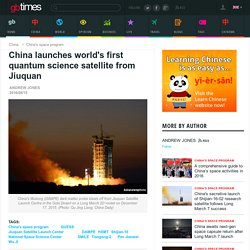 The Quantum Science Satellite lifted off from the Jiuquan Satellite Launch Centre at 01:40 Beijing time on Tuesday (17:40 UTC Monday), with a Long March 2D rocket sending the 620kg probe into a sun-synchronous orbit 600 km above the Earth. Once operational, the satellite will attempt an unprecedented experiment to see if the spooky property of quantum entanglement can operate at long distance by sending entangled photons from the satellite to two ground stations separated by around 1,200 kilometres. pic.twitter.com/VjRoEnvps3— ChinaSpaceflight (@cnspaceflight) August 15, 2016 Also referred to as QSS or QUESS, the satellite will also test the possibilities of communication via quantum 'teleportation', using an entangled pair of photons.

Above: Payloads for China's QUESS quantum satellite (NSSC). Flavour changing neutrinos give insight into Big Bang. Image copyright Kamioka Observatory, ICRR The question of why are we here perhaps means different things to different people, but in the field of particle physics it is a question that we may be close to finding an answer to. 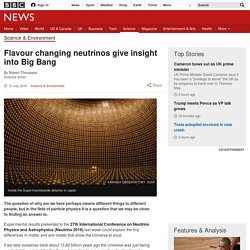 Experimental results presented to the 27th International Conference on Neutrino Physics and Astrophysics (Neutrino 2016) last week could explain the tiny differences in matter and anti-matter that allow the Universe to exist. New paper claims that the EM Drive doesn't defy Newton's 3rd law after all. Physicists have just published a new paper that suggests the controversial EM drive - or electromagnetic drive - could actually work, and doesn't defy Newton's third law after all. 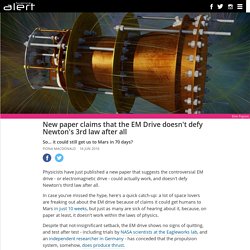 In case you've missed the hype, here's a quick catch-up: a lot of space lovers are freaking out about the EM drive because of claims it could get humans to Mars in just 10 weeks, but just as many are sick of hearing about it, because, on paper at least, it doesn't work within the laws of physics.

Despite that not-insignificant setback, the EM drive shows no signs of quitting, and test after test - including trials by NASA scientists at the Eagleworks lab, and an independent researcher in Germany - has conceded that the propulsion system, somehow, does produce thrust. Why is that so surprising? That's because of how the EM drive is supposed to work, in theory at least. That sounds pretty incredible, right? *Cue scream face emoji* So if that's the case, why hasn't anyone detected it before? 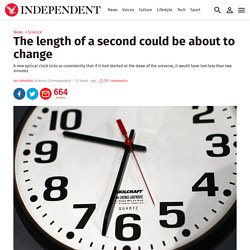 But researchers in Germany now believe they have found how to make the most accurate clock ever created, which keeps time so well that if it had started 14 billion years ago at the Big Bang it would have lost just 100 seconds. While the change in accuracy would hardly be noticed by humans, it could actually be significant for GPS navigation – increasing the accuracy on the ground from a few metres to a few centimetres – as well as electrical power grids and computerised financial networks.