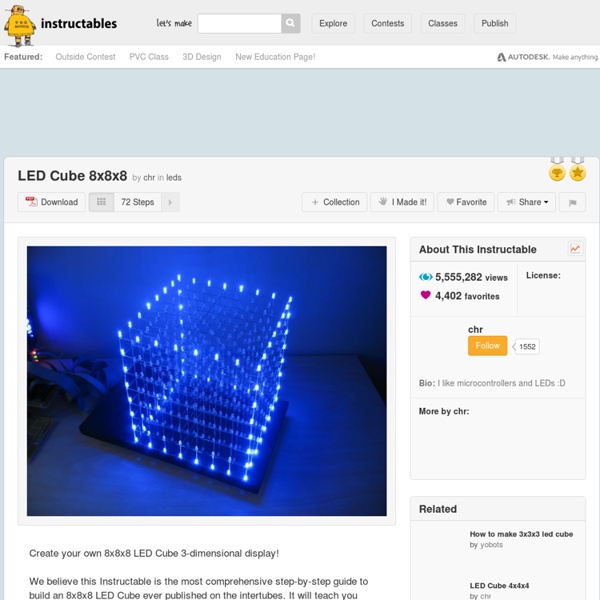 At first glance this project might seem like an overly complex and daunting task. However, we are dealing with digital electronics here, so everything is either on or off! I've been doing electronics for a long time, and for years i struggled with analog circuits. The analog circuits failed over half the time even if i followed instructions. One resistor or capacitor with a slightly wrong value, and the circuit doesn't work. About 4 years ago, I decided to give microcontrollers a try. A digital circuit doesn't care if a resistor is 1k ohm or 2k ohm, as long as it can distinguish high from low. With that said, there are still some things you should know before venturing out and building this rather large project. You should have an understanding of: Basic electronics.

Build a Programmable LED Cube By Ari Dubinsky and Brad Eckert Product Marketing Assistants LED cubes rely on an optical phenomenon called persistence of vision or POV. If you flash an LED really fast, the image stays on your retina for a little while after the LED turns off. By flashing each layer of the cube one after another really fast, it gives the illusion of a 3D image, this is also called multiplexing. The LED cube is made up of columns and layers. Each of the 16 (anode) columns and the 4 (cathode) layers are connected to the controller board with a separate wire, and can be controlled individually. Anode (red) & cathode (blue) layers

DIY Solar Lamp: Make Your Own Eco-Friendly Sun Jars The principle is simple and seductively clever: solar lights that store energy during the day and release light at night. These can be purchased ready-made in a variety of colors (yellow, blue and red) but they can also be built at home. A simple, less-technical approach involves buying a conventional solar-powered yard lamp and then essentially harvesting it for key pieces to put in a jar. 8x8x8 LED Cube Kit Introduction Project Info Author: Chris Difficulty: Very Difficult Time Invested: 20 Hours Prerequisites: Take a look at the above articles before continuing to read this article. Whats a good temperature sensor / thermistor? First of all, a TMP36 sensor is an analog output device. Its output is volts, not bits. The ADC on the Arduino has ten bits, so I don't know where the "9 bit" stuff comes from. I think I can guess where the "20 values" comes from, and I'll show my guess in a minute.

Sunrise simulator « Electro Bob You can check this project out on: Warning: this circuit deals with mains voltage which is lethal. DO NOT attempt to build it unless you perfectly understand what you are doing. 3D LED CUBE 3D LED cube is composed of 64 mono-chromatic LEDs arranged in a 4 * 4 * 4 matrix. LED lights create animated patterns that blink, morph, and change. Four push buttons on the bottom of LED cube allow user to select mode, and scroll through the 3D animations available.

Sensor tutorials An analog temperature sensor is pretty easy to explain, its a chip that tells you what the ambient temperature is! These sensors use a solid-state technique to determine the temperature. That is to say, they dont use mercury (like old thermometers), bimetalic strips (like in some home thermometers or stoves), nor do they use thermistors (temperature sensitive resistors). Instead, they use the fact as temperature increases, the votage across a diode increases at a known rate. (Technically, this is actually the voltage drop between the base and emitter - the Vbe - of a transistor.

LED light painting: Geeks creating works of art through tech – New Tech Gadgets & Electronic Devices No matter if you’re part of the art or geek scene, light painting has become a recent trend blending the two. The medium has evolved to something more than just waving flashlights in front of a camera with a long exposure. It requires an understanding of photography as well as the hardware and software that make these projects possible. The trend of using a “light wand,” or and LED RGB light strip, began with a group of artists that wanted to map urban WiFi signals .

HNTE - RGB LED Cube OK so I have finally found some time to begin writing the story of my RGB LED cube, this project was always going to be the next step in the evolution of my LED Cube. I can only hope that it will be as popular as my original cube, for those of you that followed my original cube project you will probably notice a few similarities. I built the RGB cube while I was living in the UK for 6 months, so I had access to a limited number of tools and most of the work was done on the dining room table to the dismay of my girlfriend (wife now). Working on this project I have learned a lot about animating in colour, software modulation for fading and c++ in general, so hopefully I can teach you readers a thing or two as well.

LightScythe - The Mechatronics Guy Battery power is provided from a 6V SLA battery, which is able to power the strip directly without regulation. Parts list (Per scythe): Software: Arduino code: The arduino code is quite simple. Infinite RGB LED Cube The 8x8x8 LED cube project published on the Instructables website was very detailed and yet looked simple enough for me not just to complete but add substantial enhancements as well. Following is a tutorial on how I built my 8x8x8 LED cube and also how I created the firmware and simulation using Flowcode 6. After planning on creating a larger single color version of the cube I quickly realized that to double the display dimensions to 16x16x16 meant multiplying the number of LEDs and interconnections by 8. The thought of processing 2,048 LEDs was too much for me so I scaled down my thinking and instead decided to repeat the 8x8x8 (512-LED) design but using full color RGB LEDs instead of single color LEDs. Even at 8x8x8 RGB LEDs it still tallies up to around 2,200 solder joints so be warned!

Virtual Lighting Studio The ambient light represents the light coming from the studio environment. You can turn it on or off and change its color and intensity. If you're lost and need some help, click here. But you probably know that... Click on any help text to hide this. This is a schematic view of the studio. Kits SparkFun will be closed for New Years Day (Jan 1, 2016) and closing at 3:30pm MT on Dec 31st. Orders placed after 2pm MT on Dec 31st will process the following Monday. sparkfun.com Shopping Cart 0 items log in register