Laser Mirrors - Play Laser Mirrors Game on Plonga.com. Light & Optics: Introduction. To understand light you have to know that what we call light is what is visible to us. 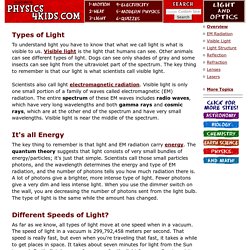 Visible light is the light that humans can see. Other animals can see different types of light. Dogs can see only shades of gray and some insects can see light from the ultraviolet part of the spectrum. The key thing to remember is that our light is what scientists call visible light. Scientists also call light electromagnetic radiation. The key thing to remember is that light and EM radiation carry energy. Optics For Kids - The Optical Society: Exploring the Science of Light. How Light Emitting Diodes Work - HowStuffWorks. Light emitting diodes, commonly called LEDs, are real unsung heroes in the electronics world. 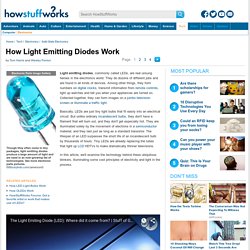 They do dozens of different jobs and are found in all kinds of devices. Among other things, they form numbers on digital clocks, transmit information from remote controls, light up watches and tell you when your appliances are turned on. Collected together, they can form images on a jumbo television screen or illuminate a traffic light. Basically, LEDs are just tiny light bulbs that fit easily into an electrical circuit. But unlike ordinary incandescent bulbs, they don't have a filament that will burn out, and they don't get especially hot. In this article, we'll examine the technology behind these ubiquitous blinkers, illuminating some cool principles of electricity and light in the process. How Glow in the Dark Stuff Works. Today I found out how glow in the dark stuff works. 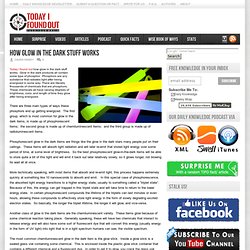 Phosphorescent glow in the dark items are things like the glow in the dark stars many people put on their ceilings. More technically speaking, with most items that absorb and re-emit light, this process happens extremely quickly at something like 10 nanoseconds to absorb and emit. How Do Things Glow in the Dark? Are you afraid of the dark? 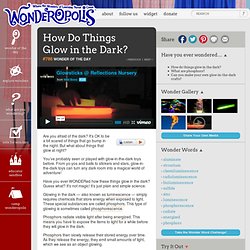 It’s OK to be a bit scared of things that go bump in the night. But what about things that glow at night? You’ve probably seen or played with glow-in-the-dark toys before. From yo-yos and balls to stickers and stars, glow-in-the-dark toys can turn any dark room into a magical world of adventure! Have you ever WONDERed how these things glow in the dark? Glowing in the dark — also known as luminescence — simply requires chemicals that store energy when exposed to light. Phosphors radiate visible light after being energized. Phosphors then slowly release their stored energy over time. What makes things glow in the dark? How does glow-in-the-dark stuff work? - HowStuffWorks. You see glow-in-the-dark stuff in all kinds of places, but it is most common in toys. 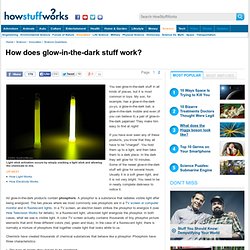 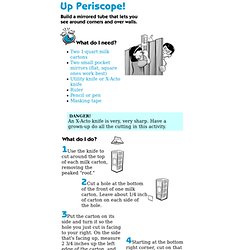 You need two small mirrors, but they don't have to be identical. If you have a rectangular mirror, or one with a handle, it's okay if part of it sticks out the side of the carton. Periscope Facts for Kids.   Kids Encyclopedia. Large driveway, patio or garden sundial. This is a design for analemmatic sundials, large or small, with elliptical dials. 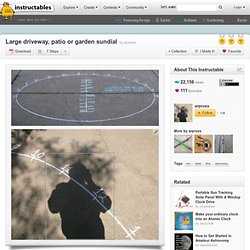 The one I made with my son is twelve feet across, drawn in sidewalk chalk on a level part of our driveway, and you check the time by standing in the spot corresponding to the date and seeing where the middle of your ow shadow falls. You can make a permanent one by first drawing in chalk and then painting over it (but we are renting the house). Drawing these is fun, and makes a good science education project for small or large kids (one's own, or a class at school). It should take a little over an hour to do the basic measurements and drawing, more if one wants it to be more decorative. Depending on the size and the features of your location, you may need up to two people's help with drawing the ellipse, though I will also say a little about how you can make it without drawing an ellipse. Many variations are possible. Tools needed: Phases of the Moon Explanation for kids -Animation Lesson Unit. The Phases of the Moon for Kids - Time. 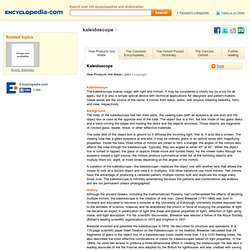 It may be considered a child's toy (or a toy for all ages), but it is also a simple optical device with technical applications for designers and pattern-makers. Greek words are the source of the name; it comes from kalos, eidos, and skopios meaning beautiful, form, and view, respectively. Background. FETCH_Kaleid-o-mania.pdf. Make a Kaleidoscope - HowStuffWorks. A kaleidoscope is an ideal science project that teaches kids how to reflect the spectrum of colors and make beautiful images. 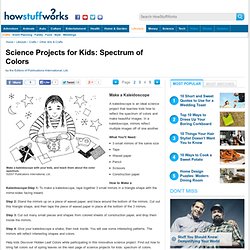 In a kaleidoscope, mirrors reflect multiple images off of one another. What You'll Need:3 small mirrors of the same sizeTapeWaxed paperPencilScissorsConstruction paper How to Make a Kaleidoscope:Step 1: To make a kaleidoscope, tape together 3 small mirrors in a triangle shape with the mirror-sides facing inward. Step 2: Stand the mirrors up on a piece of waxed paper, and trace around the bottom of the mirrors. Cut out this triangle shape, and then tape the piece of waxed paper in place at the bottom of the 3 mirrors. Step 3: Cut out many small pieces and shapes from colored sheets of construction paper, and drop them inside the mirrors. Step 4: Give your kaleidoscope a shake, then look inside. Help kids Discover Hidden Leaf Colors while participating in this innovative science project. Looking for more science projects to do with your kids?

Build your own kaleidoscope. Kaleidoscopes Explained - HowStuffWorks. At the most basic level, a kaleidoscope is made of two or more mirrors or reflective surfaces positioned at an angle to each other, usually forming a V-shape or a triangle. 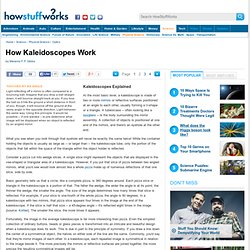 A tubeorcase -- often looking like a spyglass -- is the body surrounding the mirror assembly. A collection of objects is positioned at one end of the mirrors, and there's an eyehole at the other end. What you see when you look through that eyehole will never be exactly the same twice! Light & Optics: Lenses. Glasses and Contact Lenses. Listen Why do some people need glasses and others don't? Everyone's eyes are a little different — not just the color, but the way they work and how well they see. Sometimes all the parts of the eye don't work together the way they should. But eyeglasses or contact lenses, also called corrective lenses, can help most people see more clearly. How Eyes Work. Optics for Kids - What are Lenses. Optics For Kids - The Optical Society: Exploring the Science of Light. Mixing colors.