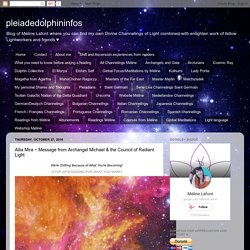 We are here now to take into account what is going on for you and to reflect that back to you, so that, you might know yourself more fully and to share with you what is changing for us, as a result of what is changing for you. We see you as divine frequencies unfolding in a time space reality, replicas of your energy structure. Like you would see a fractal image, unfolding perfect copies of itself infinitely, we see you in time space giving unique flavor and choice of focus to the variations of your energy that arise from your expression and flow. 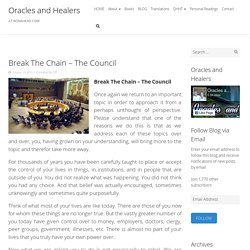 Please understand that one of the reasons we do this is that as we address each of these topics over and over, you, having grown on your understanding, will bring more to the topic and therefor take more away. ~ Channeling the Masters ~ It is important that you understand what an amazing time period you are living through. 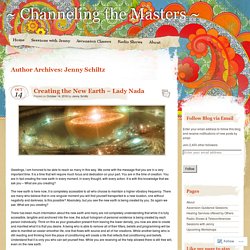 This is the time period when all of your lives, your lessons, and growth achieved come into one final culmination. For those that have chosen to ascend this is your graduation time. What graduation means for each person will look and feel different. Yet, the premise for each soul is the same. Spherical Expansion into Greater Unity - Expect Wonderful by Ailia Mira. Message from the Galactic Dragons, 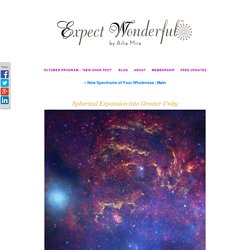 Miracles of Your Multifaceted Self by Lord MelchizedekSacred School of Om Na. Newest. Greetings dear ones. 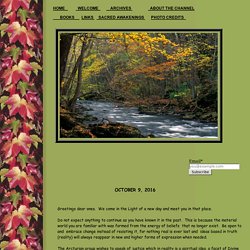 We come in the Light of a new day and meet you in that place. Do not expect anything to continue as you have known it in the past. This is because the material world you are familiar with was formed from the energy of beliefs that no longer exist. Be open to and embrace change instead of resisting it, for nothing real is ever lost and ideas based in truth (reality) will always reappear in new and higher forms of expression when needed. The Arcturian group wishes to speak of justice which in reality is a spiritual idea, a facet of Divine Consciousness the concepts of which are now shifting into higher expression. Frequency Shift: Acceleration of Divinity. Blessings Beloved Light Tribe, Yet another higher frequency entered yesterday, open your hearts to its transformational light. 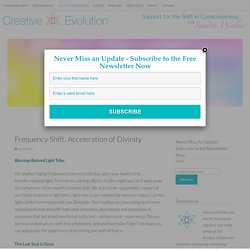 Feel into its calming effects, it’s like a light spa; let it wash away the turbulence of last month’s timeline shift. We learn to be responsible creators of our future trajectory right here, right now, in our moment by moment choices. Bloom - The Council - Oracles and Healers. Bloom – The Council For years now you have been told over and over about the light, the ever increasing and intensifying light, that had been surrounding and affecting you. 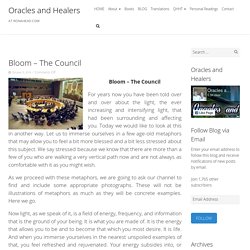 Today we would like to look at this in another way. Let us to immerse ourselves in a few age-old metaphors that may allow you to feel a bit more blessed and a bit less stressed about this subject. CHANNELED MESSAGE 9/22/16 ~ Archangel Michael through Michele Cornacchia. A great energy gateway is opened, right now for Earth, through which you are receiving the upgrades and the energy wave that is uplifting the collective, the ascension wave. 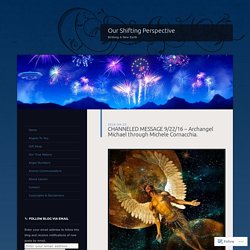 As we have mentioned in a previous message, all that is not the highest expression of the Self, love, is being pushed to the surface so that it can be illuminated by the light of your awareness. Then accepted, transmuted and released. It is your last, big healing before you reach a sustained level of higher perception, peace and connection to your Soul Self and Higher Self. Ascension Hang Over – The Blues, the Rage and the Flu ~ Vera Ingeborg. Waaaaah, September has been a ride so far. 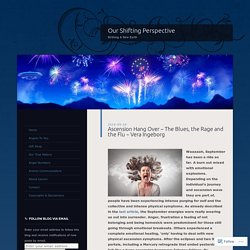 A burn out mixed with emotional explosions. Depending on the individual’s journey and ascension wave they are part of, people have been experiencing intense purging for self and the collective and intense physical symptoms. As already described in the last article, the September energies were really wearing us out into surrender. Anger, frustration a feeling of not belonging and being homesick were predominant for those still going through emotional breakouts. Others experienced a complete emotional healing, ‘only’ having to deal with new physical ascension symptoms. I myself was unable to get one clear thought together the last couple of days, nothing came through from the higher realms and I just felt dizzy, sick and very tired.

Ascension 2017: Love in Action by the Celestial White Beings ChannelingSacred School of Om Na. Avatars, Ascended Masters, Great Beings of Light ~ Archangel Michael through Ronna Herman. Beloved masters, even though it may not seem so from your vantage point, wondrous things are transpiring throughout this Sub-Universe. 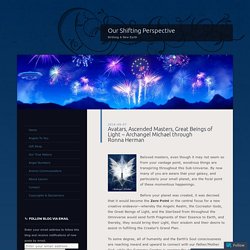 By now many of you are aware that your galaxy, and particularly your small planet, are the focal point of these momentous happenings. Before your planet was created, it was decreed that it would become the Zero Point or the central focus for a new creative endeavor—whereby the Angelic Realm, the Cocreator Gods, the Great Beings of Light, and the StarSeed from throughout the Omniverse would send forth Fragments of their Essence to Earth, and thereby, they would bring their Light, their wisdom and their desire to assist in fulfilling the Creator’s Grand Plan.

Are You Listening to the Universe? Via Enlightened-consciousness.com (Thanks to Woo Woo Media) We get all kinds of signs from the universe daily, yet decoding them and applying them to our everyday lives is a bit more of a challenge. The tricky thing is, you may not recognize the guidance at first. It may be totally unnoticeable, or even if you do notice it, it’s easy to discredit it as only a coincidence. The Universe doesn’t leave you and your stubbornness out to dry, though. ARCHANGEL MICHAEL CHANNELED MESSAGE 9/1/16. You are in a very unique widow of opportunity right now in this moment of your ascension process. Arcturian Group Message 8/28/16.

Timeline Shifting – Passing Through The Silver Gate. The World is Not Falling Apart; The Veil of World-Wide Corruption is Lifting. The Photon Belt -Higher Dimensions (copied) Winging with Whitehawk. The following future shift scenario comes courtesy of ‘ascension guide’ Lisa Renee, who tends to go deep & detailed, so settle in for this one.This is not a fluff piece. She mentions a “possible collective dark night of the soul” incoming, which I’ve been feeling at every level, and acutely, of late. The Soul Cleanse Team. Eliza: On New Horizons. Eliza: On New Horizons The past couple of weeks have been challenging for me (and others) for many reasons.