Project Gutenberg Self-Publishing - eBooks. Mystery of the Iniquity. We live in a time like no other. 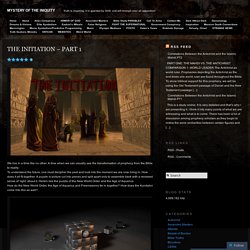 A time when we can visually see the transformation of prophecy from the Bible to reality. To understand the future, one must decipher the past and look into the moment we are now living in. How does it all fit together. A puzzle is picture cut into pieces and split apart only to assemble back with a renewed sense of ‘light’ about it. Seven rays. The seven rays is an occult concept that has appeared in several religions and esoteric philosophies in both Western culture and in India since at least the sixth century BCE. 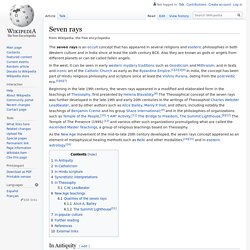 Also they are known as gods or angels from different planets or can be called fallen angels. In the west, it can be seen in early western mystery traditions such as Gnosticism and Mithraism; and in texts and iconic art of the Catholic Church as early as the Byzantine Empire.[1][2][3][4] In India, the concept has been part of Hindu religious philosophy and scripture since at least the Vishnu Purana, dating from the post-Vedic era.[5][6][7] As the New Age movement of the mid-to-late 20th century developed, the seven rays concept appeared as an element of metaphysical healing methods such as Reiki and other modalities,[14][15] and in esoteric astrology.[16] In Antiquity[edit]

How Did “The Seven” Shape Human History? (5) Part Five: The Seven Rays A journey from Thoth’s Seven Lords of Cycles long ago in Atlantis to The Seven Rainbow People of modern times reveals a common thread of “Seven Rays” glowing like an optical fiber through the ages. 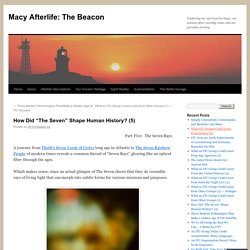 Which makes sense, since an actual glimpse of The Seven shows that they do resemble rays of living light that can morph into subtle forms for various missions and purposes. Nsitden, one of The Seven Rainbow People, shows himself to the INIT group in a subtle human form (foreground) and as a more ethereal being (background). (Transimage received 1997 February 26, by Maggy Fischbach, Station Luxembourg)

Seven gifts of the holy spirit 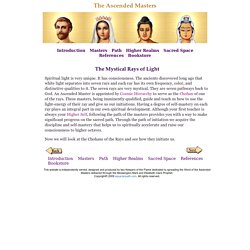 It has consciousness. The ancients discovered long ago that white light separates into seven rays and each ray has its own frequency, color, and distinctive qualities to it. The Seven Rays of God, the Light of the Soul. The Seven Rays of Divine Manifestation. Who am I? 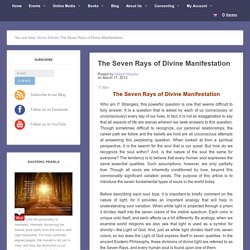 Strangely, this powerful question is one that seems difficult to fully answer. It is a question that is asked by each of us (consciously or unconsciously) every day of our lives. In fact, it is not an exaggeration to say that all aspects of life are arenas wherein we seek answers to this question. Though sometimes difficult to recognize, our personal relationships, the career path we follow and the beliefs we hold are all unconscious attempts at answering this perplexing question. When looked at from a spiritual perspective, it is the search for the soul that is our quest.

Before describing each soul type, it is important to briefly comment on the nature of light, for it provides an important analogy that will help in understanding soul variation. A BRIEF DESCRIPTION OF THE SEVEN RAYS. Taken from Alan Oken’s Soul-Centered Astrology: A Key To Your Expanding Self With Comments by Nancy B. 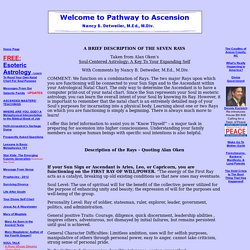 Detweiler, M.Ed., M.Div. COMMENT: We function on a combination of Rays. The two major Rays upon which you are functioning will be connected to your Sun Sign and to the Ascendant within your Astrological Natal Chart. The only way to determine the Ascendant is to have a computer print-out of your natal chart. I offer this brief information to assist you in “Know Thyself” – a major task in preparing for ascension into higher consciousness. The Rays in Esoteric Astrology Calculation Tables. The Rays in Esoteric & Spiritual Astrology Monad Ray, Soul Ray, Personality Ray, Astral Ray, Mental Ray, Physical Ray & the sub-rays including the Calculation Tables for individual determination Artwork by Jean-Luc Bozzoli Primarily you are your Monad ray, that unchanging divine spark within you, which secreted part of itself onto the fifth mental plane as your Soul ray. 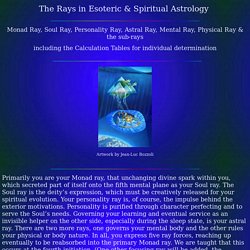 The Soul ray is the deity’s expression, which must be creatively released for your spiritual evolution. The Monad ray is that divine life atom to which all other permanent atoms were attached by the attending angel at your conception. Man, as he seeks his perfection (reunion with the absolute) is a spiritual being, always progressing forward, regardless of his pace. Astarte. Astarte (Greek: Ἀστάρτη, Astártē) is the Hellenized form of the Middle Eastern goddess Astoreth (Northwest Semitic), a form of Ishtar (East Semitic), worshipped from the Bronze Age through classical antiquity. 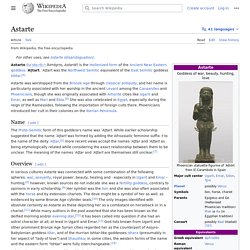 The name is particularly associated with her worship in the ancient Levant among the Canaanites and Phoenicians. She was also celebrated in Egypt following the importation of Levantine cults there. The name Astarte is sometimes also applied to her cults in Mesopotamian cultures like Assyria and Babylonia. Name[edit] Overview[edit] Astarte was connected with fertility, sexuality, and war. Astarte riding in a chariot with four branches protruding from roof, on the reverse of a Julia Maesa coin from Sidon Astarte was worshipped in Syria and Canaan beginning in the first millennium BC and was first mentioned in texts from Ugarit. In Ugarit[edit] In Egypt[edit] Fragment of a crudely carved limestone stela showing king Thutmose IV adoring a goddess (probably Astarte).