Cunk on Christmas: 15 hilarious Philomena Cunk quotes about Santa, Jesus, and EastEnders. Hile Charlie Brooker’s 2016 Wipe will still only be an hour long (despite the chaos of the year it’s covering), there’s an extra treat for fans of the show. 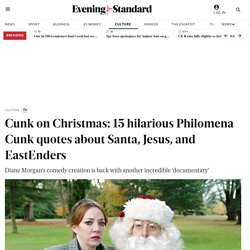 The inquisitive mind of Philomena Cunk (aka Diane Morgan) is back in another stand-alone special, following the gut-busting Cunk on Shakespeare earlier this year. With Cunk on Christmas, she’s asking all the important questions: what is Christmas? Who is Jesus? And will Santa be allowed in the UK after Brexit?

Here are 15 lines that had us chuckling uncontrollably. 1) “Whether you’re a Christian or a Jew, a Muslim or a Hindu, a Jedi or a Womble, Christmas is everywhere.” 33 of Philomena Cunk's most ingeniously idiotic quotes. After first making waves as a talking head on Charlie Brooker’s satirical Weekly Wipe, intrepid spoof telly personality Philomena Cunk – the comic alter-ego of actress Diane Morgan – has gone on to prominent mock documentary success.

She’s bewildered experts with her deliberately ignorant and baffling lines of questioning, even landing her own 2016 TV special ‘Cunk On Shakespeare’. And now she’s back with her brand new series Cunk on Britain, which starts tomorrow. Barry Sh*tpeas eat your heart out. i's TV newsletter: what you should watch next. TOP 25 QUOTES BY JOHANNES BRAHMS. RoboCop Quotes. [Clarence Boddicker and his crew are fleeing an armed robbery] Clarence Boddicker: [opening up boxes of charred money] Shit! 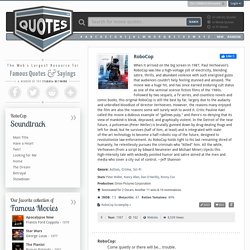 I don't believe it! Bobby: What? Clarence Boddicker: You! You burnt the fucking money! Bobby: I had to blow the door! 35 Inspirational Quotes On Failure. Failure is the stepping stone to success, as long as you learn from it. 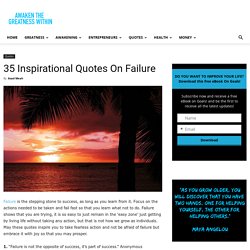 Focus on the actions needed to be taken and fail fast so that you learn what not to do. Failure shows that you are trying, it is so easy to just remain in the ‘easy zone’ just getting by living life without taking any action, but that is not how we grow as individuals. May these quotes inspire you to take fearless action and not be afraid of failure but embrace it with joy so that you may prosper. 1.

6 Quotes By Buddha That Will Change How You See The World And Yourself. Was Larry Bird The Best Trash Talker In NBA History? Here's A Collection Of His Best Taunts. Orson Welles's Greatest Insults. Your relationship with Orson Welles probably depends on your age. 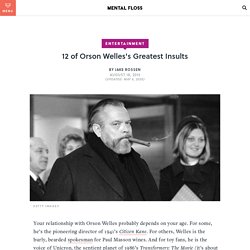 For some, he’s the pioneering director of 1941’s Citizen Kane. For others, Welles is the burly, bearded spokesman for Paul Masson wines. And for toy fans, he is the voice of Unicron, the sentient planet of 1986’s Transformers: The Movie (it’s about “toys who do horrible things to each other,” he explained to a friend). Welles could seemingly do it all, from reinventing filmmaking to antagonizing Optimus Prime. But one thing the man seemed incapable of was tolerating impertinence. 1.

“Now, Bogart, who was both a coward and a very bad fighter, was always picking fights in nightclubs, in sure knowledge that the waiters would stop him. 42 Memorable Facts About the Coolest Lines in History. 16 Savage Teddy Roosevelt Insults. Theodore Roosevelt had a way with words. 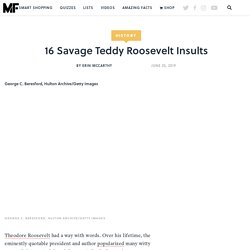 Over his lifetime, the eminently quotable president and author popularized many witty turns of phrase. And though he wasn’t fond of swearing, Roosevelt didn't always speak softly, either—he was capable of delivering a savage insult when he felt it was appropriate (though usually he saved his irritation for letters and didn't deliver the insult to his enemy’s face). Here are just a few of them. 1. 33 of Philomena Cunk's most ingeniously idiotic quotes. After first making waves as a talking head on Charlie Brooker’s satirical Weekly Wipe, intrepid spoof telly personality Philomena Cunk – the comic alter-ego of actress Diane Morgan – has gone on to prominent mock documentary success. 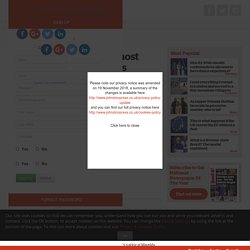 She’s bewildered experts with her deliberately ignorant and baffling lines of questioning, even landing her own 2016 TV special ‘Cunk On Shakespeare’. And now she’s back with her brand new series Cunk on Britain, which starts tomorrow. Barry Sh*tpeas eat your heart out. “Why do we cry when it’s the onions that are getting hurt?”

“Hello science man. “Money. “Medicine means we can treat everything from made-up diseases like the plague, to modern epidemics like allegic-ness to bread.” 15 Funny Quips from Great American Humorists. Between the Duke and Duchess of Cambridge welcoming their third child on April 23, 2018 and Prince Harry's upcoming marriage to Suits star Meghan Markle in May, the line of succession to the British throne has become a topic of interest all over the world. 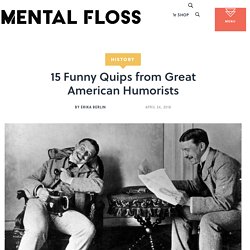 And the truth is, it’s complicated. Though Queen Elizabeth II, who turned 92 years old on April 21, shows no signs of slowing down, here are the royals who could one day take her place on the throne—in one very specific order. Chris Jackson/Getty Images As a direct result of his mother being the world's longest-reigning monarch, Prince Charles—the eldest child of Queen Elizabeth II and Prince Philip—is the longest serving heir to the throne; he became heir apparent in 1952, when his mother ascended to the throne. Woody Allen: his 40 best one-liners - Comedy. Franz Kafka Quotes (Author of The Metamorphosis) A Selection of Virginia Woolf's Most Savage Insults.

Tomorrow is the 55th anniversary of the premiere of Who’s Afraid of Virginia Woolf?. 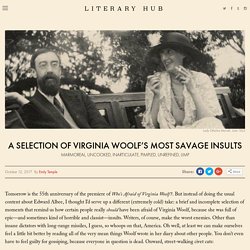 But instead of doing the usual content about Edward Albee, I thought I’d serve up a different (extremely cold) take: a brief and incomplete selection of moments that remind us how certain people really should have been afraid of Virginia Woolf, because she was full of epic—and sometimes kind of horrible and classist—insults. Writers, of course, make the worst enemies. Other than insane dictators with long-range missiles, I guess, so whoops on that, America. Oh well, at least we can make ourselves feel a little bit better by reading all of the very mean things Woolf wrote in her diary about other people. You don’t even have to feel guilty for gossiping, because everyone in question is dead. List of Everything Anthony Bourdain Hates and Dislikes. Over the Fourth of July, instead of thinking about hot dogs, hamburgers or where he’d placed his half-full can of domestic beer, something entirely different was troubling Anthony Bourdain. 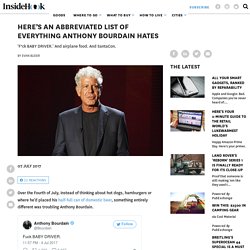 Never one to keep his opinions to himself, the 61-year-old only need 14 characters out of the allotted 140 to let it be known that he’s no fan of Edgar Wright's new (and generally well-liked) crime thriller. This is par for the course for Bourdain. The man hates lots of stuff, and passionately. Here, in no particular order, is a list of 20 things Bourdain has taken to task: My ass contemplates those who talk behind my back. - Francis Picabia - BrainyQuote. Authors:ABCDEFGHIJKLMNOPQRSTUVWXYZ <div class="bqLn"><table class="container" style="background-color: yellow"><tr><td valign="top"><img src="/images/silk/exclamation.png" alt="! "></td><td><b>Please enable Javascript</b><br> This site requires Javascript be enabled to provide you the best experience.

From J.G. Un jour sans fin (1993) - Quotes. Most Quotable Movies of All Time — Watch the Best Movie Quotes Ever. Caddyshack What is it: The mid-'70s Second City mainstage cast spends its summer break on a golf course, cocaine is provided. 41 Examples of Hauntingly Beautiful Famous Last Words. This story was first published on Creepy Catalog. 1. “I love you very much, my dear Beaver.” – Jean-Paul Sartre (1905-1980), to his partner Simone de Beauvoir. 2. “Pardonnez-moi, monsieur. . – Marie Antoinette (1755-1793), to her executioner, after accidentally stepping on his foot. Famous People Who Said Strange Things Before Death - Looper. Manly and Virile Last Words From Famous Men.

Bill Murray Quotes On Life And Happiness - Best Bill Murray Quotes. Badass Steve McQueen Quotes - Iconic Actor and Motorcycle Driver. Woody Allen Quotes To Start Off Your Week. Kurt Vonnegut Quotes To Start Your Week. Kurt Vonnegut was one of the most important American writers of all time. He penned such classics as Slaughterhouse-Five, Cat's Cradle, and Breakfast of Champions, and had a style that teetered between science-fiction, satire, and humor. To younger generations, he's known as the guy who's responsible for the "So it goes" tattoo on your friend's wrist and the reason people want to smoke unfiltered Pall Malls. The New York Times once called him "the counterculture's novelist," and, before his death in 2007, Vonnegut published over a dozen novels, as well as a plethora of personal essays, short stories, and scripts.

And culling through much of these works, we found 14 prolific quotes by the late author to start off your week. Grab a cup of coffee and enjoy the madness. Businessinsider. Showing all quotes that contain 'James Thurber'. Philip K. Dick Quotes (Author of Do Androids Dream of Electric Sheep?) “Grief reunites you with what you've lost. It's a merging; you go with the loved thing or person that's going away. You follow it a far as you can go. But finally,the grief goes away and you phase back into the world. One martini is all right. Two are too many, and three are not enough. - James Thurber at BrainyQuote.