Punctuation Marks: Ellipsis. Punctuation marks: the ellipses… You see it everywhere, but most people don’t know what it’s called or how to use it properly. 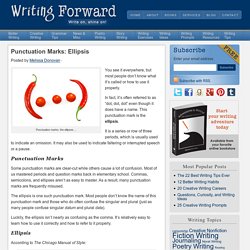 In fact, it’s often referred to as “dot, dot, dot” even though it does have a name. How To Use an Ellipsis… Correctly. Ellipsis Mark ... The Ellipsis. An ellipsis [ … ] proves to be a handy device when you're quoting material and you want to omit some words. 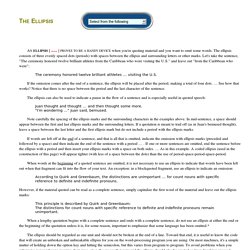 If the omission comes after the end of a sentence, the ellipsis will be placed after the period, making a total of four dots. … See how that works? Notice that there is no space between the period and the last character of the sentence. The ellipsis can also be used to indicate a pause in the flow of a sentence and is especially useful in quoted speech: Juan thought and thought … and then thought some more.

Note carefully the spacing of the ellipsis marks and the surrounding characters in the examples above. Ellipses. People often ask how to use ellipses, those little dot-dot-dots you often see in e-mail messages. 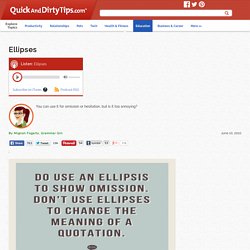 For example, Mitra from Michigan asked, “When is it appropriate to use '...' in writing? People use it all the time, and it seems like a way to make your writing more informal and conversational, as if you were pausing. Can you also use [the dot-dot-dot] for formal writing?” The answer is that you can use ellipses in formal writing in other ways, and you can occasionally use an ellipsis as Mitra described in his e-mail, but you shouldn't overdo it. How To Use Quotation Marks (Punctuation) VideoJug present you with a simple guide on how to properly use quotation marks in your English writing. 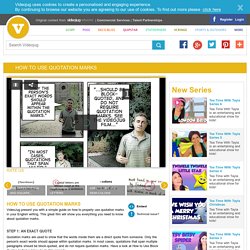 This great film will show you everything you need to know about quotation marks. Step 1: An exact quote Quotation marks are used to show that the words inside them are a direct quote from someone. Only the person's exact words should appear within quotation marks. In most cases, quotations that span multiple paragraphs should be block-quoted, and do not require quotation marks. Step 2: Single or double? There's no real difference between the single (‘) and double (“) versions, but be consistent; it's normally better to use the double version to differentiate it from an apostrophe (‘):‘I was at St. You can use the different types of quotation mark to indicate a quote within a quote: “John said, ‘Good morning Dave,'?” Quotation Marks Song - Educational Music Video. The Punctuation Guide. There are two ways to incorporate quotations in your writing: run-in quotations and block quotations. 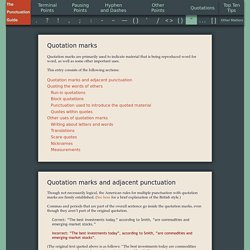 Run-in quotations Short quotations can generally be run in to the main text using quotation marks. In his novel White Noise, Don DeLillo neatly summarizes the materialist philosophy: “It’s all this activity in the brain and you don’t know what’s you as a person and what’s some neuron that just happens to fire or just happens to misfire.” Block quotations Longer quotations should be set off from the main text, and are referred to as block quotations. In Walden, Henry David Thoreau makes the case for following one’s dreams: I learned this, at least, by my experiment: that if one advances confidently in the direction of his dreams, and endeavors to live the life which he has imagined, he will meet with a success unexpected in common hours. 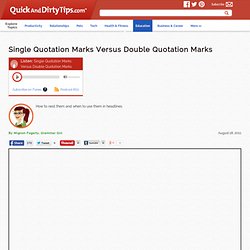 SPONSORED BY AUDIBLE.COM, the Internet's leading provider of audiobooks with more than 75,000 downloadable titles across all types of literature, including fiction, non-fiction and periodicals. For a free audiobook of your choice, go to audiblepodcast.com/gg. How to Use Double Quotation Marks Most people think of double quotation marks as being for quotations, which they are, but they also have other legitimate uses. For example, double quotation marks are often used around the title of a short work such as a magazine article or an episode of a TV show.

The “Here Come the Suns” episode of Eureka was hilarious. The rules for longer works such as books are tricky. Quotation Marks: When to Use Double or Single Quotation Marks. Not only is the emphasis wrong on this sign, but it is evident that double and single quotation. 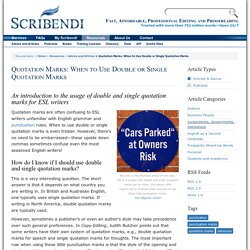 GrammarBook.com Mobile. The Punctuation Guide. An ellipsis is a set of three periods ( . . . ) indicating an omission. 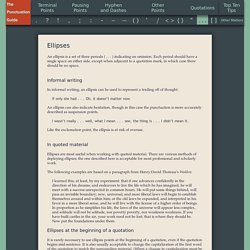 Each period should have a single space on either side, except when adjacent to a quotation mark, in which case there should be no space. Informal writing In informal writing, an ellipsis can be used to represent a trailing off of thought. If only she had . . . Oh, it doesn’t matter now. An ellipsis can also indicate hesitation, though in this case the punctuation is more accurately described as suspension points.