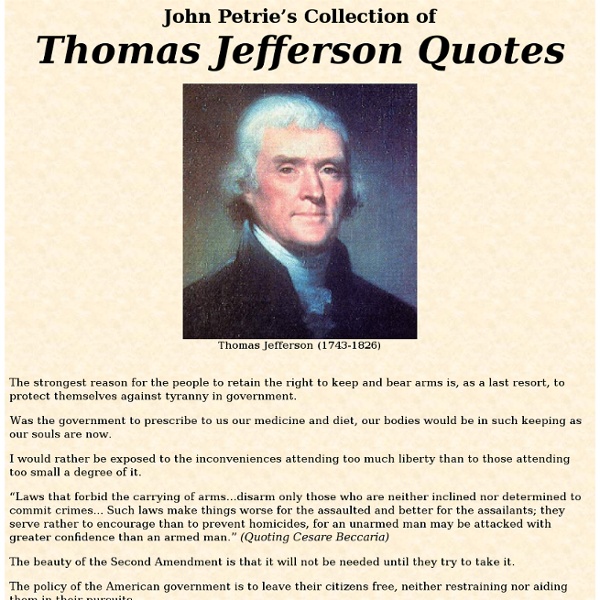 Thomas Jefferson (1743-1826) The strongest reason for the people to retain the right to keep and bear arms is, as a last resort, to protect themselves against tyranny in government. Was the government to prescribe to us our medicine and diet, our bodies would be in such keeping as our souls are now. I would rather be exposed to the inconveniences attending too much liberty than to those attending too small a degree of it. “Laws that forbid the carrying of arms...disarm only those who are neither inclined nor determined to commit crimes... The beauty of the Second Amendment is that it will not be needed until they try to take it. The policy of the American government is to leave their citizens free, neither restraining nor aiding them in their pursuits. No man has a natural right to commit aggression on the equal rights of another, and this is all from which the laws ought to restrain him. I am not a friend to a very energetic government. The price of freedom is eternal vigilance.

Biblical Principles of Law: Law and Justice At the conclusion of the book of Ecclesiastes, the reader, having been exposed to the vanity of men's philosophies of life, is given one simple message: "Fear God, and keep His commandments: For this is the whole duty of man."1 Beginning with the latter part of the nineteenth century and continuing at a faster pace in the 1980's, a steady parade of legal scholars, judges, lawyers, and an ever-increasing vanguard of their fellow citizens in the Christian West, have ignored this wise biblical counsel. "Professing themselves to be wise," they have "become fools" by exchanging a heritage of a revealed law-order created by God, and accepted by their Christian forefathers, for an imaginary political power game invented by man. This deal - a trade of law for politics - has brought the once-Christian West to the brink of destruction. God made these rules - this law-order - knowable to man from the beginning, even before He revealed His law to Moses. Second, God created plant and animal life.

Getting the facts straight about the Founding Fathers Invoking the Founding Fathers on Independence Day to celebrate our nation’s birth is a fine thing to do. Invoking them to score political points? Watch out. Take, for example, a Facebook post about Benjamin Franklin that circulated in May, a post that was actually aimed at making fun of tea party favorite Rep. Michele Bachmann, R-Minn. The meme quotes Bachmann as saying, "This country could use a president like Benjamin Franklin again." It’s not just claims on social media. Talking about the First Amendment, radio host Bryan Fischer of American Family Radio said that "by the word ‘religion’ in the First Amendment, the founders meant Christianity." Our research and interviews with historians showed that the Founding Fathers pretty clearly meant all religion. On the other side of the political aisle, Keith Olbermann -- at the time a commentator on the liberal network MSNBC -- said that Adams as president signed the Treaty of Tripoli as an "outreach to Muslims."

14 Things You Probably Didn't Know About Margaret Atwood Bill of rights Bills of rights may be entrenched or unentrenched. An entrenched bill of rights cannot be modified or repealed by a country's legislature through normal procedure, instead requiring a supermajority or referendum; often it is part of a country's constitution and therefore subject to special procedures applicable to constitutional amendments. A not entrenched bill of rights is a normal statute law and as such can be modified or repealed by the legislature at will. In practice, not every jurisdiction enforces the protection of the rights articulated in its bill of rights. Exceptions in Western democracies[edit] Australia is the only Western democratic country with neither a constitutional nor federal legislative bill of rights [1][2] to protect its citizens, although there is ongoing debate in many of Australia's states. List of bills of rights[edit] General[edit] Specifically targeted documents[edit] See also[edit] References[edit] External links[edit]

10 Amazing Women Who Led Rebellions History Male revolutionaries such as Che Guevara have gone down as heroes for leading rebellions against “the Man.” But forgotten by history are the women who took on far greater powers than Fulgencio Batista. 10 Yaa Asantewaa Yaa Asantewaa, described as the African Joan of Arc, was Queen Mother of the Edweso region, part of the former Asante Kingdom and now modern-day Ghana. When the Asante began to resist British rule, the British Governor, Lord Hodgson, demanded that they turn over their Golden Stool, used as a throne and symbol of independence. Shortly after, on March 28, 1900, what was left of the monarchy was assembled and the British Captain demanded the Stool. This speech caused the Yaa Asantewaa War for Independence to break out on the same day. 9 Corazon Aquino Corazon “Cory” Aquino was a Filipino woman who, in 1986, led the first democratically elected government of the Philippines since before the Japanese occupation. 8 Laskarina Bouboulina 7 Queen Mavia Of Arabia 2 Toypurina

International Covenant on Economic, Social and Cultural Rights ECOSOC Resolution 2007/25: Support to Non-Self-Governing Territories by the specialized agencies and international institutions associated with the United Nations (26 July 2007) The International Covenant on Economic, Social and Cultural Rights (ICESCR) is a multilateral treaty adopted by the United Nations General Assembly on 16 December 1966, and in force from 3 January 1976. It commits its parties to work toward the granting of economic, social, and cultural rights (ESCR) to the Non-Self-Governing and Trust Territories and individuals, including labour rights and the right to health, the right to education, and the right to an adequate standard of living. As of 2014, the Covenant had 162 parties.[1] A further seven countries, including the United States of America, had signed but not yet ratified the Covenant. The Covenant is monitored by the UN Committee on Economic, Social and Cultural Rights. Genesis[edit] Summary[edit] Part 3 (Articles 6 – 15) lists the rights themselves.