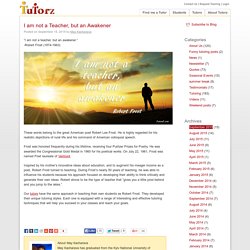 -Robert Frost (1874-1963) These words belong to the great American poet Robert Lee Frost. He is highly regarded for his realistic depictions of rural life and his command of American colloquial speech. Frost was honored frequently during his lifetime, receiving four Pulitzer Prizes for Poetry. He was awarded the Congressional Gold Medal in 1960 for his poetical works. Inspired by his mother’s innovative ideas about education, and to augment his meager income as a poet, Robert Frost turned to teaching. A BMW can`t Take you as far as a Diploma. Astrid Alauda: Tea&Wisdom. “Tea is instant wisdom… just add water!” 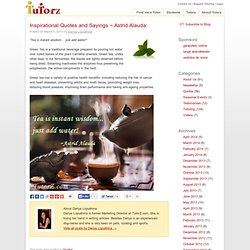 Green Tea is a traditional beverage prepared by pouring hot water over cured leaves of the plant Camellia sinensis. Green tea, unlike other teas, is not fermented, the leaves are lightly steamed before being dried. Steaming inactivates the enzymes thus preserving the polyphenols, the active components in the herb. Green tea has a variety of positive health benefits, including reducing the risk of cancer and heart diseases, preventing artritis and tooth decay, promoting weight loss, reducing blood pressure, improving brain performance and having anti-ageing properties. 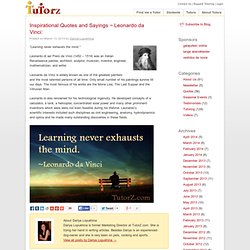 Leonardo di ser Piero da Vinci (1452 – 1519) was an Italian Renaissance painter, architect, sculptor, musician, inventor, engineer, mathematician, and writer. Leonardo da Vinci is widely known as one of the greatest painters and the most talented persons of all time. Only small number of his paintings survive till our days. The most famous of his works are the Mona Lisa, The Last Supper and the Vitruvian Man. Leonardo is also renowned for his technological ingenuity. Dariya Lopukhina is former Marketing Director at TutorZ.com. Louisa May Alcott: “I’m not afraid of storms, for I’m learning how to sail my ship.” 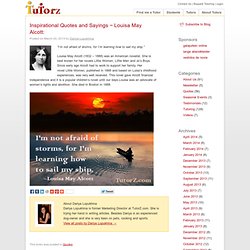 Louisa May Alcott (1832 – 1888) was an American novelist. She is best known for her novels Little Women, Little Men and Jo’s Boys. Since early age Alcott had to work to support her family. Her novel Little Women, published in 1868 and based on Luisa’s childhood experiences, was very well received. Henry Wadsworth Longfellow - about Books. “The love of learning, the sequestered nooks, And all the sweet serenity of books.” 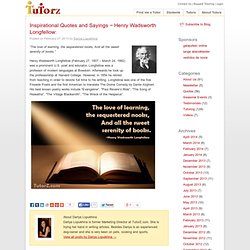 Henry Wadsworth Longfellow (February 27, 1807 – March 24, 1882) was a prominent U.S. poet and educator. Longfellow was a professor of modern languages at Bowdoin. Afterwards he took up the professorship at Harvard College. However, in 1854 he retired from teaching in order to devote full time to his writing. Longfellow was one of the five Fireside Poets and the first American to translate The Divine Comedy by Dante Alighieri. George Washington, about Books: Brad Henry, about good teacher. “A good teacher can inspire hope, ignite the imagination, and instill a love of learning.” 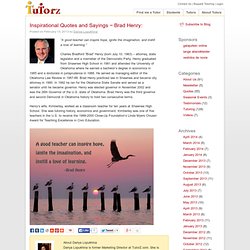 Charles Bradford “Brad” Henry (born July 10, 1963) – attorney, state legislator and a memeber of the Democratic Party. Henry graduated from Shawnee High School in 1981 and attended the University of Oklahoma where he earned a bachelor’s degree in economics in 1985 and a doctorate in jurisprudence in 1988. He served as managing editor of the Oklahoma Law Review in 1987-88.

Brad Henry practiced law in Shawnee and became city attorney in 1990. In 1992 he ran for the Oklahoma State Senate and served as a senator until he became governor. Henry’s wife, Kimberley, worked as a classroom teacher for ten years at Shawnee High School. Dariya Lopukhina is former Marketing Director at TutorZ.com. Ronald Reagan, about Human Mind. “There are no constraints on the human mind, no walls around the human spirit, no barriers to our progress except those we ourselves erect.” 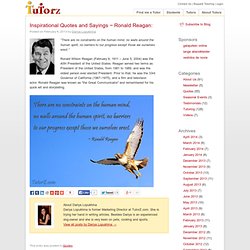 Ronald Wilson Reagan (February 6, 1911 – June 5, 2004) was the 40th President of the United States. Reagan served two terms as President of the United States, from 1981 to 1989, and was the oldest person ever elected President. Prior to that, he was the 33rd Governor of California (1967–1975), and a film and television actor. Ronald Reagan was known as ”the Great Communicator” and remembered for his quick wit and storytelling.

Dariya Lopukhina is former Marketing Director at TutorZ.com. Seneca, about Gratitude. “Nothing is more honorable than a grateful heart.” 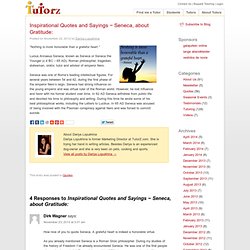 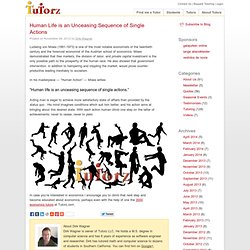 Mises demonstrated that free markets, the division of labor, and private capital investment is the only possible path to the prosperity of the human race. He also showed that government intervention, in addition to hampering and crippling the market, would prove counter-productive leading inevitably to socialism. In his masterpiece — “Human Action” — Mises writes: “Human life is an unceasing sequence of single actions.” Acting man is eager to achieve more satisfactory state of affairs than provided by the status quo .

Stephen Richards, about Self-Belief: “When you do what you fear most, then you can do anything.” 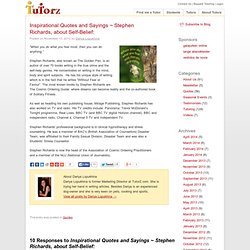 Stephen Richards, also known as The Golden Pen, is an author of over 70 books writing in the true crime and the self-help genres. He concentrates on writing in the mind, body and spirit subjects. He has his unique style of writing which is in the fact that he writes “Without Fear or Favour”. The most known books by Stephen Richards are The Cosmic Ordering Guide: where dreams can become reality and the co-authored book of Solitary Fitness. Bo Jackson, about Goal Setting: “Set your goals high, and don’t stop till you get there.” Bo Jackson (born November 30, 1962) – an outstanding American multi-talented athlete, who excelled in baseball and football. He is the first athlete who was named an All-Star in two major American sports. He was recruited by the New York Yankees in high school but he instead entered Auburn University on a football scholarship. In Auburn University he led his football team to a Sugar Bowl victory and won the Heisman Trophy in 1985.

In 1986 he joined MLB and later joined the NFL and the L.A. In the late 1980s and early 1990s Jackson became a popular figure through ”Bo Knows” Nike advertising campaign. Dariya Lopukhina is former Marketing Director at TutorZ.com. Lewis Thomas, about Biology: “I cannot think of a single field in biology or medicine in which we can claim genuine understanding, and it seems to me the more we learn about living creatures, especially ourselves, the stranger life becomes.” Roger Bacon, about Mathematics: “For the things of this world cannot be made known without a knowledge of mathematics.” Roger Bacon (1214 – 1294), (scholastic accolade Doctor Mirabilis, meaning “wonderful teacher), English scientist, one of the greatest philosophers of the Middle Ages and Franciscan friar.

Anthony J. D’Angelo, about Education: Education is ... ~John Dewey. Mathematics is... ~Stefan Banach. A human being is... ~Horace Mann. Education is... ~Nelson Mandela.