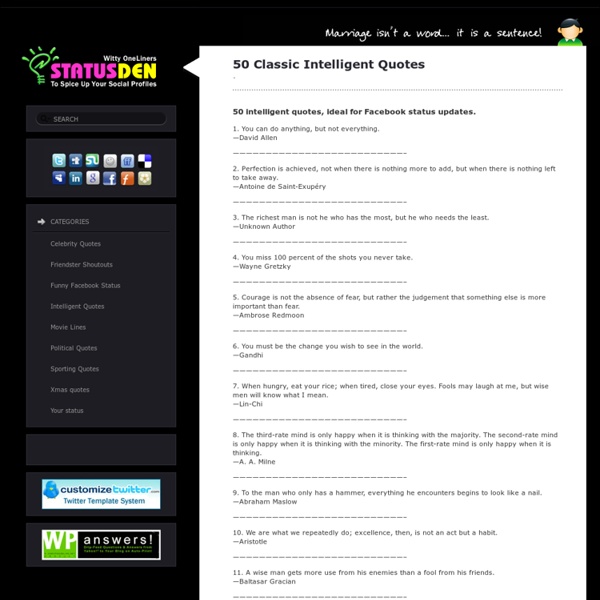 The Dalai Lama’s 18 Rules For Living May 6, 2011 | 42 Comments » | Topics: Life, List At the start of the new millennium the Dalai Lama apparently issued eighteen rules for living. Since word travels slowly in the digital age these have only just reached me. Here they are. Collected Quotes from Albert Einstein [Note: This list of Einstein quotes was being forwarded around the Internet in e-mail, so I decided to put it on my web page. I'm afraid I can't vouch for its authenticity, tell you where it came from, who compiled the list, who Kevin Harris is, or anything like that. Still, the quotes are interesting and enlightening.] "Any intelligent fool can make things bigger, more complex, and more violent. It takes a touch of genius -- and a lot of courage -- to move in the opposite direction."

Arabian Nights - Index This is an extract of one of the earliest translations of the "Arabian Nights" into English, made by Sir Richard Francis Burton. I got the "flat" ASCII text from a gopher server that has been unavailable for some years now. I have no idea who scanned/typed the text. This extract is not nearly complete. The "arabian nighs" form a huge text corpus, and in translating them, Burton performed a gargantuan work. At ca. 350 pages per volume and 16 volumes, the full text corpus will contain some 11MByte.

Expressions - Photo 166 of 263 Click photo to toggle full-size dreams09 539 px x 289 px (35.1 KB) Album: Expressions 100 Quotes from The Secret Movie 1. We all work with one infinite power 2. The Secret is the Law of Attraction (LOA) Inspiration Gallery #189 - Quotations & From up North In From up North’s inspiration galleries we present the latest of our findings from the wonderful world of design. Amazing high quality artworks in various categories from great designers all over the globe. Wasted time May the bridges I burn light the way The best way to predict the future is to create it

Recommended Intellectual Catholic Book List by Fr. Gary Coulter These book were chosen to help enhance the faith and belief of Catholic students outside of the classroom. They are not intended to replace the textbooks or curriculum used by Catholic Schools. Charming Quotes By Kids on How the World Works These are charming "quotes" by kids on how the world works. Some seem almost too good to be true, or written by real-life kids. However, it never ceases to amaze us the wise words that kids can say and if they aren't real quotes, they definitely could be. Never trust a dog to watch your food. Crimes Against Humanity Having been conditioned your entire lives, the way we are all conditioned our entire lives, to receive sound-bite answers to questions we have never had the critical ability to form in our minds, forecloses our ability to interrogate reality and draw conclusions from it. That is the function of the media. That is the function of the educational system you understand.

The 29 Best Charlie Sheen Quotes: The Definitive List from Charlie Sheen Quotes Wow, so this Charlie Sheen quote machine just won't slow down. I think it's safe to say that there's never been a human being in the history of talking human beings who has had so many amazing quotes. So many! And the scary thing is that it's been less than a week. Yogi Berra took like twenty years to come up with what, seven solid quotes? Sheen does that in his sleep (that is assuming Charlie Sheen ever stops tweaking and takes a snooze -- though from the fact that his skin appears to be falling off, that doesn't seem to be the case).

11 Most Ironically Banned Books Of All Time Saturday, September 26th through Saturday, October 3rd is the 27th annual National Banned Books Week, a week that opposes censorship, the Thought Police, and closeted gay "family values" types who sublimate their man-on-man urges through rampant and vigorous homophobia. Long time readers of this website will know I hate three things: Internet commenters who misuse your and you're... hypocrisy... and you're mom. Today's list is going after hypocrisy. (It would go after your mom, but her ass is too big to fit anything after it.) I searched through lists of books that have been banned at one time or another (mostly in the U.S.), and found the ones whose bans were the most hypocritical, ignorant, and, based on the content of the books, ironic.