Looking Deeper at Chart Types with Visualoop - The Data Visualisation Catalogue Blog. Back in 2015 I contributed a series of blog posts to Visualoop that looked deeper into each of the chart type I had already covered by looking into them in a bit more detail and at their history. 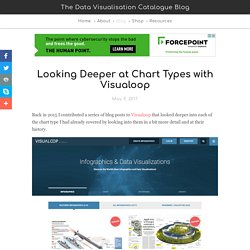 5 способов сделать инфографику вирусной. Improve Your Data Literacy: 16 Blogs to Follow in 2016. Editor's Note: This is a curated list by the School of Data, a project by the Open Knowledge Foundation and Peer 2 Peer University that works to empower civil society organizations, journalists, and citizens with skills to use data in creating more equitable and effective societies. 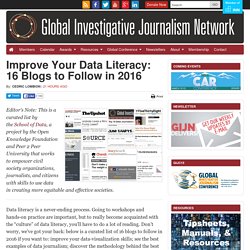 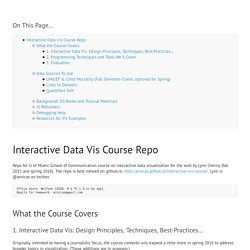 Repo for U of Miami School of Communication course on interactive data visualization for the web by Lynn Cherny (fall 2015 and spring 2016). The repo is best viewed on github.io: Lynn is @arnicas on twitter. Office Hours: Wolfson 1020A, M & Th 1-3 or by appt. Emails for homework: arnicas@gmail.com What the Course Covers 1. Originally intended as having a journalistic focus, the course contents will expand a little more in spring 2016 to address broader topics in visualization.

Weather in Eindhoven. Sometimes beautiful data viz comes as a result of experimentation. 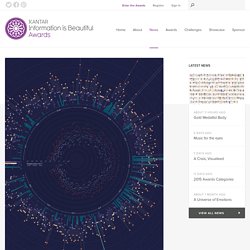 That’s exactly what happened when freelance designer, Sonja Kuijpers, set out to practice designing with data and ended up creating this stunning radial weather chart, Weather Eindhoven 2014. Using data from Weather Underground, the viz tracks rain, wind force and temperature in the Dutch city over the course of a year. Sonja studied Public Space at the Design Academy Eindhoven before working at a landscape and urban architecture firm.

7 Great Places to Publish Infographics - Design Roast. Infographics, with their engaging visuals and authoritative voice, are recipes for success in today’s online environment. 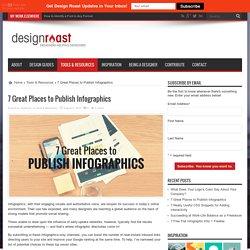 Their use has exploded, and many designers are reaching a global audience on the back of strong models that promote social sharing. Those unable to draw upon the influence of early-uptake networks, however, typically find the results somewhat underwhelming — and that’s where infographic directories come in! By submitting to these infographics-only channels, you can boost the number of near-instant inbound links directing users to your site and improve your Google ranking at the same time. To help, I’ve narrowed your list of potential choices to these top seven sites: 1. Reads in Tweets – June 2015 - HOME - Innovation - DW.DE. April 2015. At the end of each month I pull together a collection of links to some of the most relevant, interesting or thought-provoking web content I’ve come across during the previous month. 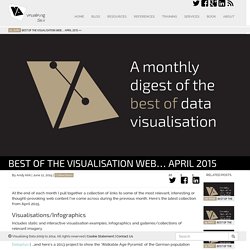 Here’s the latest collection from April 2015. Visualisations/Infographics. How to Make an Animated GIF Infographic. Eleanor Lutz has done some amazing design work with her company Tabletop Whale. 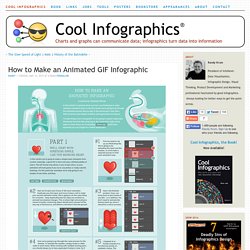 She is known especially for her work creating animated infographics using animated GIF files. She has posted How to Make An Animated Infographic as a 2-part explanation that lays out her process in Photoshop (as an animated GIF file of course!). Recently I’ve been getting a lot of emails asking for a tutorial on how to make animations. So this week I put together a quick explanation for anyone who’s interested. Weather in Eindhoven. Quantbait Is Recognized as a Leader in Publishing Digital Cartography! Interview with Tiago Veloso founder of Visualoop - Labs of Latvia. Hi Tiago, please tell us more about yourself. 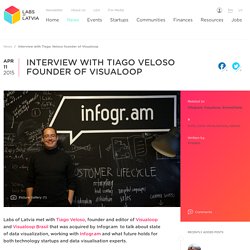 What were you doing before Visualoop? Actually it's very unconventional story since I don't have any background in design, journalism or visualization itself. I studied and worked in travel, tourism and hotel management for over two decades, in several parts of the world until about 2009. Then I decided to shift to working from home and having a different lifestyle. In those fields you work when everybody else is resting, so you don't have weekends and holidays like most people. I started to research how people were communicating, exchanging information and otherwise behaving on Twitter, Facebook, LinkedIn and other channels.

Data Visualization Library. I’ve been doing a lot of teaching and training on data visualization and presentation techniques lately. 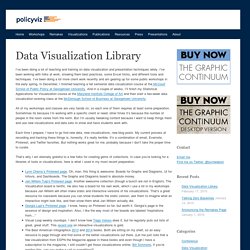 I’ve been working with folks at work, showing them best practices, some Excel tricks, and different tools and techniques. I’ve been doing a lot more client work recently and am gearing up for some public workshops in the early spring. In December, I finished teaching a fall semester data visualization course at the McCourt School of Public Policy at Georgetown University. And in a couple of weeks, I’ll finish my Statistical Applications for Visualization course at the Maryland Institute College of Art and then start a two-week data visualization evening class at the McDonough School of Business at Georgetown University. All of my workshops and classes are very hands on, so each one of them requires at least some preparation. 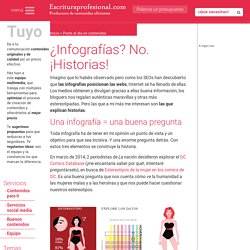 Year-end listicles we’re clicking. Predictions for 2015 Nieman Lab’s top predictions for journalism in 2015: Melody Kramer on crowdsourcing, Alberto Cairo on visualization, Philip Bump on news notifications, Zeynep Tufekci on getting creeped out by algorithms, Latoya Peterson on how communication is changing, among others. Best-of lists Interactive storytelling The New York Times roundup of its best interactive storytelling, graphics and multimedia of 2014. December in Latin America: All the tech news you shouldn’t miss from the past month - Tech News - Tech Rumors - TechRumors.Co. December was a fairly quiet month for Latin America’s tech scene itself. However, some macro changes that took place may have a long-lasting impact, such as the rapprochement between the US and Cuba. Here’s the news you don’t want to miss: Internet for Cubans? Not so fast… The White House’s recent move to start normalizing relations with Cuba is probably one of the biggest events of 2014.

From a technology perspective, it could have a positive impact on Internet connection quality on the island, as the White House stated that US telcos are now “allowed to establish the necessary mechanisms, including infrastructure, in Cuba to provide commercial telecommunications and Internet services.” However, the MIT Technology Review rightly points out that an open Internet won’t arrive overnight, as it remains to be seen whether the dictatorship is willing to relinquish its stronghold on freedom of speech. Infogr.am Acquires Infographics Blog Visualoop. Big news in the world of infographics. In December, the online design site Infogr.am closed a deal to acquire the infographics blog and news site Visualoop. December 3, Riga. – Infogr.am, the company behind the popular infographic creator, has acquired Visualoop, one of the leading data visualisation news sites from Brazil. The website covers infographics and data visualisation in English and Portuguese languages.

Latvian Inforg.am buys Brazilian data-visualization blog Visualoop. Infogr.am has announced its purchase of Visualoop, one of the leading data-visualisation blogs in Brazil. Visualoop writes about info graphs and data-visualisation in English and Portuguese. The exact price of the business acquisition deal is not revealed. «Our goal is to make Visualoop the leading news media in the world in terms of data-visualisation,» – says founder and CEO of Infogr.am Uldis Leiterts. «This business deal will strengthen our presence in Brazil. Cooperation with capable media will improve the position held by Infogr.am and contribute to the mission to increase interest toward data-visualisation in the world.» Starting December 3rd, Infogr.am will start offering services in Portuguese. This Month in Data: November 2014. November revealed a plethora of fascinating data-driven insights into how teams work together, the ways that social behavior dictates our approach to online privacy, the activities of Yelp users, and much more.

Here’s our roundup of the biggest data science news of the month, from Pivotal, academia, and the tech industry. What data science told us about teamwork. ESA Rosetta Philea lands on Comet! Reference material. [last updated 31 October 2014] Use Infographics to Make an Impact. Infographics are effective marketing tools for several reasons. Best of 2014 French Story Maps Competition.

Randomactsofcartography. Maps Mania: Global Carbon Emissions on Google Maps. The World Resources Institute has used the Google Maps API to create an animated map which visualizes carbon dioxide emissions by country over the last 160 years. The Changing Global Emissions Map uses scaled circular markers to show the carbon emissions of each country around the world.

What a Sinking Ship Can Tell Us About Teaching Data Visualization. It was an icebreaker idea I first heard about on a podcast. I planned to use it during my first Visualizing Data class, itself the first required class in the new Journalism + Design program, bringing students together from across The New School. Top Ten #ddj: The Week’s Most Popular Data Journalism Links. Why Infographics are better than Textual Blog Posts? Blogging is usually text-based. Writing long-form content pleases the search engine but the perceptions of viewers are changing. Images and videos resonate better with readers who are potential leads. How To Promote Your Business With A Blog. Incredible Design: This is Visual Journalism [74] Advanced Content Promotion Checklist and Guide. Where to find great infographics - Social Media Business Academy. Where to find infographics There is a real skill to producing an effective infographic.

Whether you’ll looking for a company to produce data-visualization material for you or just some interesting infographics to share, this list will help. What makes a good infographic? A clear message. OK Fest 2014: Open that data! Global data journalism resources. World Cup Infographics Worth Seeing. 9 Visualisation Blogs Followed at Boxever. World Cup 3D Data Visualization.