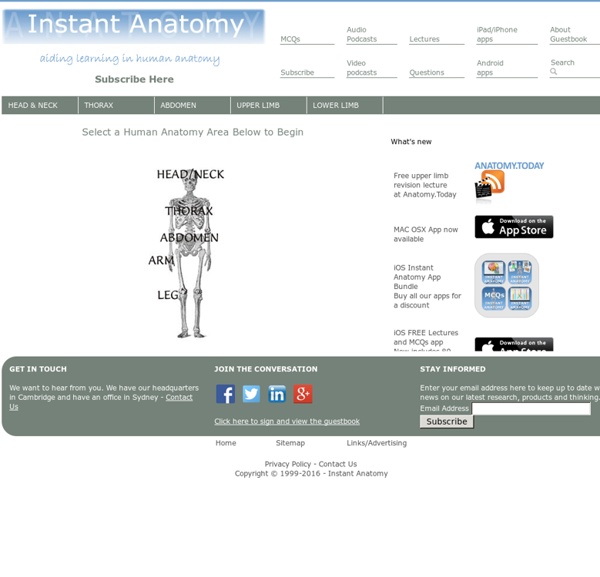 Student Nurse - A&P Anatomy and Sectional Terminology It sounds silly, but you learn as many new words in an A&P course as you do a beginning foreign language course. Really --there's been research to prove it! - Kevin Patton Links here are for general A & P resources. For more detailed system by system info see: Cardiac, Ear, Endocrine, Eye, Gastrointestinal, Hematological, Integumentary, Musculoskeletal, Neurological, Peripheral Vascular, Renal, and Respiratory.

Scientific Video Site Plate Tectonics Lesson Summary Overview According to the theory of plate tectonics, Earth's crust is composed of a number of individual plates that change shape and position over time. Geophysical evidence indicates that the face of Earth's surface has changed significantly since its initial formation and that the plates on which the continents are located are in constant motion.

Brain Atlas - Introduction The central nervous system (CNS) consists of the brain and the spinal cord, immersed in the cerebrospinal fluid (CSF). Weighing about 3 pounds (1.4 kilograms), the brain consists of three main structures: the cerebrum, the cerebellum and the brainstem. Cerebrum - divided into two hemispheres (left and right), each consists of four lobes (frontal, parietal, occipital and temporal). The outer layer of the brain is known as the cerebral cortex or the ‘grey matter’. It covers the nuclei deep within the cerebral hemisphere e.g. the basal ganglia; the structure called the thalamus, and the ‘white matter’, which consists mostly of myelinated axons. – closely packed neuron cell bodies form the grey matter of the brain.