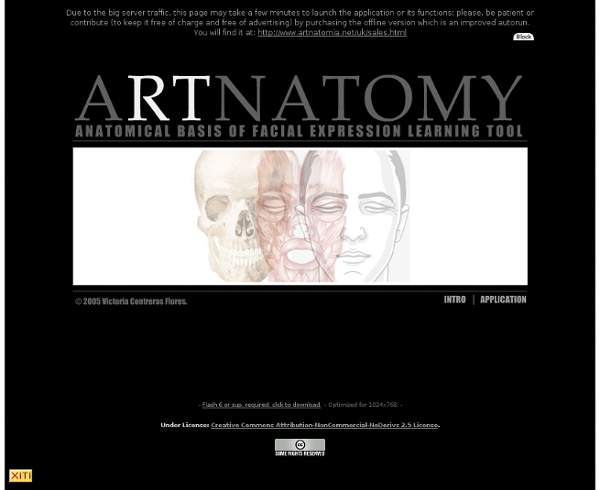 Thank you for your interest in ARTNATOMY. If you are viewing this page it means the link you followed doesn't follow the rules required by the Creative Commons License for our free online application. So, please, if you are going to link ARTNATOMY/ARTNATOMIA on your web or blog, follow the rules by linking to the main page, www.artnatomia.net ,(not just to the application one) and attribute the work in the manner specified by the author (see "Use of material and contact" tab). This way, you'll be spreading also the spanish version, the offline version available and collaborating to the maintenance (free of charge and free of advertising) of the big server traffic due to the free online version at this site. Thanks in advance. And now click to enjoy:

Emotional memory study reveals evidence for a self-reinforcing loop Emotional memory study reveals evidence for a self-reinforcing loop Researchers exploring the brain structures involved in recalling an emotional memory a year later have found evidence for a self-reinforcing “memory loop” — in which the brain’s emotional center triggers the memory center, which in turn further enhances activity in the emotional center. The researchers said their findings suggest why people subject to traumatic events may be trapped in a cycle of emotion and recall that aggravates post-traumatic stress disorder (PTSD). They said their findings also suggest why therapies in which people relive such memories and reshape perspective to make it less traumatic can help people cope with such memories. The paper by Florin Dolcos, Kevin LaBar and Roberto Cabeza, was published online February 9, 2005, in the Proceedings of the National Academy of Sciences. “This study is the first to really test recall of emotional memories after a long time period,” said Cabeza.

NeuroImage - Distinct brain mechanisms for conscious versus subliminal error detection Abstract Metacognition, the ability to monitor one's own cognitive processes, is frequently assumed to be univocally associated with conscious processing. However, some monitoring processes, such as those associated with the evaluation of one's own performance, may conceivably be sufficiently automatized to be deployed non-consciously. Here, we used simultaneous electro- and magneto-encephalography (EEG/MEG) to investigate how error detection is modulated by perceptual awareness of a masked target digit. Envy is a stronger motivator than admiration Admiration is happy self-surrender; envy is unhappy self-assertion. Søren Kierkegaard Mind Hacks, Not Exactly Rocket Science, The Frontal Cortex ... there are so many successful blogs out there for the Digest to admire. Or envy. In fact envy might be better. Although considered a sin, envy rather than admiration, drives us toward self-improvement.

45 Expressive Grunge Fonts Collection Grunge literally means a subgenre of alternative rock that emerged during the mid-1980s in the American state of Washington, particularly in the Seattle area. It is generally characterized by heavily distorted electric guitars, contrasting song dynamics, and apathetic or angst-filled lyrics which inspired typographic artist to create artistic expressions through font designs. The perfect selection of typography can convert your normal design into very attractive piece of art. Among other things, effective typography manages to achieve three necessary objectives of web designing such as its Look, Appearance and Outcome. When you are after for an expressive, eye-catching, audacious, or even provocative fonts with distinct artful characteristics, grunge fonts possess all the mentioned qualities. If you are looking for expressive grunge fonts, check out the lists below…

Mining Books To Map Emotions Through A Century : Shots - Health News hide captionWhen anthropologists tallied the use of emotional words through a century of literature, they included many books without clear emotional content — technical manuals, for example, and automotive repair guides. Steve Debenport/iStockphotography Were people happier in the 1950s than they are today? Or were they more frustrated, repressed and sad?

A Collection of Beautiful Calligraphy Fonts A few weeks ago, we have posted different fonts that can be applied by tattoo artists in their designs. This time, we are featuring calligraphy fonts to add up your collection. Calligraphy is the art of producing beautiful or artistic handwriting. It comes from two Greek words which mean “beautiful writing”.

New stuff: Predicting pain from the brain! What we did (a.k.a. What the heck is an “fMRI-Based Neurologic Signature of Physical pain”?): Study Finds Brain System for Emotional Self-Control Different brain areas are activated when we choose to suppress an emotion, compared to when we are instructed to inhibit an emotion, according a new study from the UCL Institute of Cognitive Neuroscience and Ghent University. In this study, published in Brain Structure and Function (citation below), the researchers scanned the brains of healthy participants and found that key brain systems were activated when choosing for oneself to suppress an emotion. They had previously linked this brain area to deciding to inhibit movement. “This result shows that emotional self-control involves a quite different brain system from simply being told how to respond emotionally,” said lead author Dr. Simone Kuhn (Ghent University). In most previous studies, participants were instructed to feel or inhibit an emotional response.

The ‘unnamed feeling’ named ASMR Here’s my BBC Future column from last week. It’s about the so-called Autonomous Sensory Meridian Response, which didn’t have a name until 2010 and I’d never heard of until 2012. Now, I’m finding out that it is surprisingly common. Emotion regulation choice: selecting between cognitive regulation strategies to control emotion Consider the anger that arises in a heated argument with your romantic partner, or the dreadful anxious anticipation in the dentist's waiting room prior to a root canal procedure. Our daily lives are densely populated with events that make us emotional. Luckily, however, we developed numerous ways to control or regulate our emotions in order to adapt ( Gross, 2007 ; Koole, 2009 for reviews). A central remaining challenge to explain adaptation, involves understanding how individuals choose between the different emotion regulation strategies in order to fit with differing situational demands. Specifically, when is the aforementioned romantic partner or dental patient more likely to “put aside” or disengage from the emotional situation, and when are they more likely to “make sense” or engage with their emotional reactions? How Important are Our Emotion Regulation Choices?

I wish this app was my work - I'm but a lowly student of drawing facial expressions. As to "not being behind" people with disabilities, I'm not sure how to read that :). by pearlt Jul 15