Kitchen of the Future 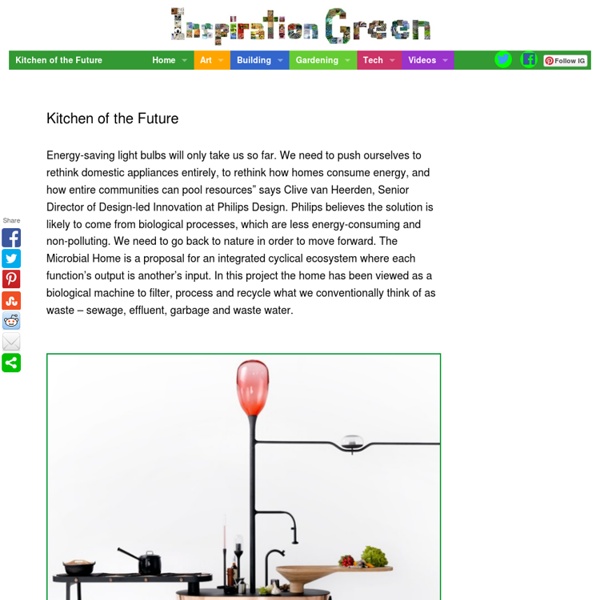 Kitchen of the Future Energy-saving light bulbs will only take us so far. We need to push ourselves to rethink domestic appliances entirely, to rethink how homes consume energy, and how entire communities can pool resources” says Clive van Heerden, Senior Director of Design-led Innovation at Philips Design. Philips believes the solution is likely to come from biological processes, which are less energy-consuming and non-polluting. The central hub in the Microbial Home system is a repositionable kitchen island, including a chopping surface with vegetable waste grinder, a gas cooking range, a glass tank that shows energy reserves and glass elements showing pressure, volume and readiness of compost sludge. Chopping surface with vegetable waste grinder. Technological development has enabled us to mimic nature’s processes. The paternoster domestic plastic waste up-cycler uses mycelium to break down plastic packaging waste. Urban bee-hive. Kudos to Philips - more, please! Related:  Ideas/Inspirations • Unique

How to Build a Universe That Doesn't Fall Apart Two Days Later First, before I begin to bore you with the usual sort of things science fiction writers say in speeches, let me bring you official greetings from Disneyland. I consider myself a spokesperson for Disneyland because I live just a few miles from it — and, as if that were not enough, I once had the honour of being interviewed there by Paris TV. For several weeks after the interview, I was really ill and confined to bed. I think it was the whirling teacups that did it. Elizabeth Antebi, who was the producer of the film, wanted to have me whirling around in one of the giant teacups while discussing the rise of fascism with Norman Spinrad... an old friend of mine who writes excellent science fiction. Science fiction writers, I am sorry to say, really do not know anything. It reminds me of a headline that appeared in a California newspaper just before I flew here. Well, I will tell you what interests me, what I consider important. But the problem is a real one, not a mere intellectual game.

Vertical Farms The Vertical Farm The current 3.3 billion global urban population is expected to grow to 5 billion by 2025... Today our agricultural footprint is the size of South America...what will it be tomorrow... Source EDITT Tower (“Ecological Design In The Tropics”) is being built in Singapore with the financial support of the National University. Mithun Architects in Seattle designed a "Center for Urban Agriculture" -- an integration of crops and livestock onto a 7.2 acre urban plot. Buckminster Fuller Challenge Clepsydra Urban Farm by Bruno Viganò & Florencia Costa. Source WORKac’s version of vertical farming combines farmers’ housing in a series of stepped terraces with a farmer’s market and public space below. An Urban Garden. Source Höweler + Yoon Architecture and Squared Design Lab proposes to build a vertical algae-powered bioreactor on the downtown Boston Filene's site. Source The “Euromediterranee” project is a proposed vertical village for the city of Marseilles. Source Source MATscape 1. 2. 3.

50 Kick-Ass Websites You Need to Know About It's time to update the entries in your browser's links toolbar. But with recent estimates putting the size of the internet at well more than 100 million distinct websites, it's getting harder and harder to get a handle on all the great stuff that's out there. That's why we've compiled this list. And unlike some lists you may have seen, which try to name the very "best" websites, but end up just telling you a lot of stuff you already know, we've chosen instead to highlight 50 of our favorite sites that fly under most people's radar. Think of it as the Maximum PC blog roll (remember those?). You might have heard of some of these sites, but we'll bet you haven't heard of all them. Demoscene.tv See What Can Be Done with 4 Kilobytes If you’re any kind of nerd at all, you probably know about the demoscene, where talented programmers create complex videos rendered in real-time, stored in incredibly small files. lite.Facebook.com Clutter-Free Social Networking You can admit it. Soyouwanna.com

Ten Anime Series You Should See Before You Die First off I’d just like to say a huge thank you to everyone that read my list of ten anime films you should see before you die—the response has been phenomenal—not just the number of people who read it, but also those who took the time out to get involved in the following discussion. Some people loved my selections, some people thought I was well off the mark, but it was clear that there was no way I was going to be able to avoid putting together another list, this time of TV series. It has been a far harder list to compile. Not only because of the vast selection to choose from, but also because I knew from the start that I would be leaving out some shows that a lot of people hold very dear. Just like last time, the aim of the list is not only to present ten examples of the anime medium that showcase the art form at its greatest, but also ten examples that are accessible to those mature viewers for whom the scene is new or even completely alien. Cowboy Bebop (1998) - 26 episodes

Plastic Bottle Schools Bottle Schools Pepsi partnered with the My Shelter foundation to build this school house made of 9,000 plastic bottles in San Pablo, Philippines. Thousands of volunteers recruited by Pepsi -- collected the used bottles, helped to raise awareness of the Philippines classroom shortage and participated in building the structure. Pepsi's clean-up campaign website, sarapmagbago.com and lots more photos here: facebook.com/pepsisarapmagbago Photo © Kristel Marie Fuentes Gonzales. After the 9,000 bottles were collected each 1.5 and 2-litre bottle was filled with adobe (sand, clay, and water with a bit of straw, twigs or manure thrown in). This machine made the filling much easier. The filled bottles set out to dry... The building process begins. String is used to keep the bottles in place as the adobe is being applied. Ran out of caps... A bit more cement will be applied and smoothed out. Photo © Kristel Marie Fuentes Gonzales Almost there. One wall is made of glass bottles. And on the outside...