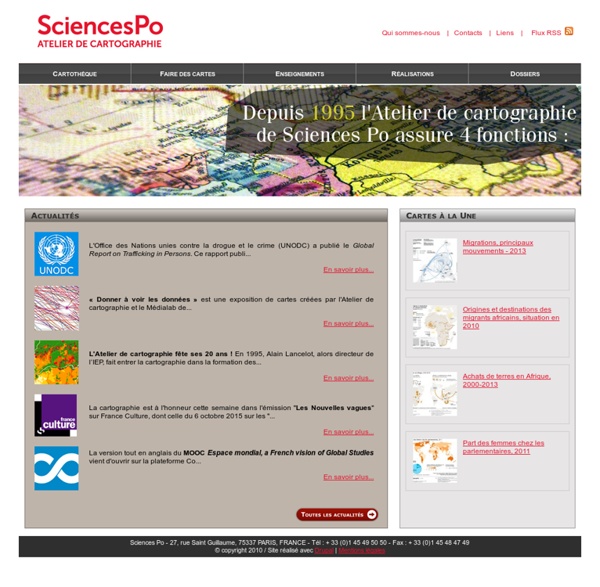 Gephi, open source graph visualization software - Part 4 Community ~ gexf gexf4j Francesco Ficarola is a Computer Engineer and a Ph.D. student at the Sapienza University of Rome. In addition he is been working for an Italian company as R&D Engineer for one year. His main research interests are Wireless Sensor Networks, Social Networking and whatever concerns “Internet of Things”. Gephi supports the 1.2draft of GEXF file format since version 0.8.

MapMaker Interactive Welcome to the MapMaker Interactive This tutorial explains how to explore National Geographic Education's interactive GIS mapping tool and tools for customizing outline maps for print. Use the zoom bar to go from a world view to a local view (or in cartographic terms, from a large scale to a small scale). If you zoom out to a world view, you will see that the map is in a Mercator projection. Use the location menus at the top to zoom from a world view to a continent, country, or other region. Identify your geographic position on the map using the latitude and longitude display at the bottom left.

ited Nations Cartographic Section Web Site LINKS TO OTHER WEB SITES: This is the United Nations Geospatial Information Section web site. Links to other sites are provided for information only. The inclusion of these links and their content does not imply official endorsement or approval whatsoever by the United Nations. DESIGNATIONS USED: The depiction and use of boundaries, geographic names and related data shown on maps and included in lists, tables, documents, and databases on this web site are not warranted to be error free nor do they necessarily imply official endorsement or acceptance by the United Nations. COPYRIGHT NOTICE: Unless otherwise noted, the maps included on this web site are produced by the Geospatial Information Section and are copyrighted by the United Nations. Reproduction of any part without the permission of the copyright owner is unlawful.

Announcing MapBox Streets: A Global Map with Street Level Detail By Dave Cole We’re excited to release MapBox Streets, our first global block-level map powered by OpenStreetMap. MapBox Streets makes it incredibly easy to get a beautiful, fresh street map on your website or mobile application in place of Google Maps. Get started now using MapBox Streets with a free account from MapBox, or with any of our monthly plans for higher usage and bulk support. For a step-by-step walk-through of how to use MapBox Streets in your web application, see Get Started with MapBox Streets. Thousands of Historic Maps Released by New York Public Library Map of the city and county of New York, showing routes and stations of the elevated railroads. From 1886The New York Public Library has released over 20,000 maps and cartographic works into the public domain under a Creative Commons licence. The documents, most of them hi-res, are hosted by the NYPL's Lionel Pincus & Princess Firyal Map Division, and are available for download via the Library's Map Warper, an ambitious online tool that aims to match historic maps to modern day plans.

Learn how to code in Gephi For developers only. If you're looking for Gephi, click on Learn. The Gephi Development Center is a repository of code, collection of builds, and a library of API references all designed to help you extend Gephi's functionalities and build new cool applications upon Gephi Platform. New to Gephi Development?

Screensaver - visualizing the global blogosphere Twingly Screensaver Beta Twingly screensaver is visualizing the global blog activity in real time. Forget RSS readers where you see only what you're interested in. Upshot: Online mapping software for business & foundations One tool. Countless possibilities. Rhiza Analytics is a powerful and elegant analytics research tool that fuses your company’s data with public and syndicated data to give you a 360 view of a situation. Whether it’s making sense of complex customer purchasing patterns across distinct geographies or delivering the right message to the right customer at the right time, Rhiza Analytics produces deep insights about customers, operations and the competitive landscape. Visual Programming Arduino: modkit and the others Not long ago, our friend [Ed Baafi] told us about the amazing work he was doing on ModKit: a very interesting project in bringing visual programming on the Arduino side. Making programming as easy as building bricks is the common Quest of many different projects, aimed to work in the Educational field, teaching kids build their own programs (and toys). Modkit is an in-browser graphical programming environment for little devices called embedded systems. Modkit can currently program Arduino and Arduino compatible hardware using simple graphical blocks similar to and heavily inspired by the Scratch programming environment developed by the Lifelong Kindergarten Group at the MIT Media Lab.Modkit is currently available by invite only. Brian’s post has a good review about all the other arduino visual programmers.