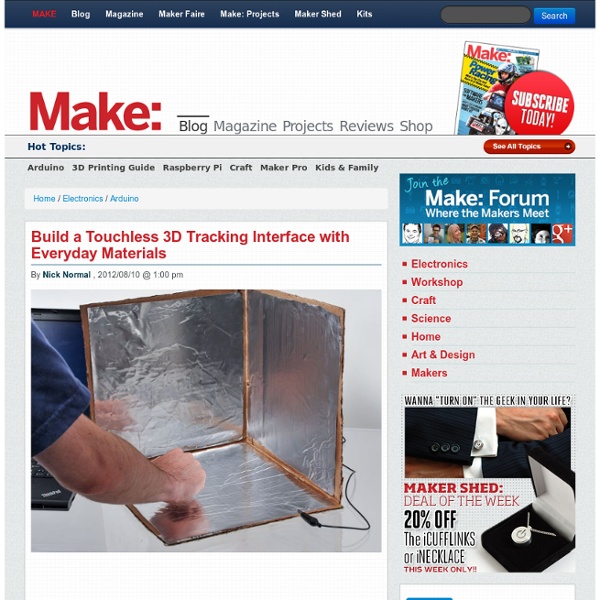 Combine low-tech materials with some high-tech components and build a completely Touchless 3D Tracking Interface. Explore capacitive sensing by using several panels of cardboard lined with aluminum foil. These panels, when charged, create electric fields that correspond to X, Y, and Z axes to create a 3D cube. With the aid of an Arduino microcontroller and some supplied code, movements inside the cube are tracked as your hand moves around inside the field. For Weekend Projects makers looking for an introduction to Arduino, this is a great project to learn from. Once you’ve gathered all your parts, this project should only take a couple hours to complete – you’ll be playing 3D Tic Tac Toe before the weekend is over! Once your touchless 3D tracker is up and running, what you do with it is only limited by your own imagination! Sign up below for the Weekend Projects Newsletter to receive the projects before anybody else does, get tips, see other makers’ builds, and more. Related

How to make Char Cord / Char Rope Japanese Scientists Create Touchable Holograms To Our Faithful Current.com Users: Current's run has ended after eight exciting years on air and online. The Current TV staff has appreciated your interest, support, participation and unflagging loyalty over the years. Your contributions helped make Current.com a vibrant place for discussing thousands of interesting stories, and your continued viewership motivated us to keep innovating and find new ways to reflect the voice of the people. We now welcome the on-air and digital presence of Al Jazeera America, a new news network committed to reporting on and investigating real stories affecting the lives of everyday Americans in every corner of the country. Thank you for inspiring and challenging us. – The Current TV Staff

How to Make Char-Twine Hubble: Where is the center of the Universe? When astronomers look at distant galaxies to determine how fast they're moving, it looks like they're all moving away from us. Does that mean we're at the center of the universe? Well, no. It turns out that every point in the universe sees itself as the center! Try this! - Use your mouse to drag the top (blue circle) layer randomly over the bottom one, the difference between the two is hard to see. - Now choose a different dot on the top layer and line it up with its corresponding dot on the bottom layer. What's going on? The top layer (the universe today) was made by enlarging the bottom layer (the universe 1 billion years ago) by 5% percent.

DIY Polygraph Machine: Detect Lies with Tin Foil, Wire and Arduino DIY Polygraph Machine: Detect Lies with Tin Foil, Wire and Arduino Lying is awesome. From a very young age, children learn that flat out denying the truth gets you out of trouble and helps keep you calm in the face of horror. But what happens when you just have to know if someone, say, used your toothbrush? You could ask them to take an expensive and arduous polygraph test. If you're industrious and don't have the dough for a legit polygraph, you can make your very own galvanic skin response (GSR) device. Today, we will make a cheap GSR device and learn if our toothbrush is really safe after all. Materials ArduinoAluminum foilVelcroWire10k resistorBreadboard Step 1 Make the Electrodes GSR machines require an even and consistent connection to the skin in order to function properly. Begin by taping the exposed end of a wires to a sheet of foil. Adhere a strip of Velcro over the tape and cut off the extra foil. Last, add a single piece of Velcro at the end of the foil side. Step 3 Load the Code

Symphony of Science How to make a tool set Life without tools is barbaric. But even simple tools can be expensive in rural parts of developing countries. Import duties bump the costs up higher than they are in the States or elsewhere, and sometimes only low-quality brands are available anyway. So, to hold off future barbarians, we'd like to show how to build a simple tool set on a very low budget. Larry Bentley, the man who figured out how to make these tools, said a wise thing: "Without tools, kids don't take stuff apart, and without taking stuff apart, you don't learn how things work." These tools, Bentley says, could be in the hands of the next William Kamkambwa,who made a working wind power generator from backyard scraps in a village in Malawi. Here's Larry's quick guide to DIY tools. The tools in this guide: Saw Pliers Wooden vice Wood drill bit / star drill bit Chisel Strap hinge vice

Top 10 Things You Can Upgrade with a Little Electronics Hacking it is a skill to do a good solder joint, it comes with LOTS of practice. so most people who rarely do it will ever get good at it. Bingo. Of course, part of the issue is having a soldering iron at the right temp with a properly tinned tip. Newbies aren't using soldering stations but a cheap iron they got at rat shack (You have questions? I don't expect to ever master tricky stuff like smts or even multilayer pcbs so I'm not much better then a newbie, anyway - and I totally suck at sweating pipe joints. Ah, well... SMT is actually a bit better than through-hole once you get the hang of it.

Top 10 DIY Tech Gifts @keyboard-vomit: Yeah, but wouldn't it be awesome if some of our not so tech friends actually attempted (and accomplished) one or more of these feats? I mean, when "it's the thought that counts," shouldn't it be a thought about something we'd actually appreciate. Then again, maybe socks are your thing. ;) @HunterShoptaw: That they are, I'm wanting some socks with an integrated HDD, and some USB connectivity. @HunterShoptaw: The thought does count, but it sure would be nice if they enjoyed the gift too. So for this year, I created wishgenies dot com for people who WANT to give good gifts, but don't know what they'll want. @keyboard-vomit: I swear that some day, some how...Google will be able to find my lost socks.

Contact lenses will project images directly onto your eyeballs All those 3DTVs and virtual reality goggles are soon to be rendered obsolete by contact lenses with built-in LED arrays that can display images on top of your retinas, whether you want them to or not. Researchers at the University of Washington have been working on extremely tiny and semi-transparent LEDs designed to be integrated into contact lenses. So far, they've managed to create red pixels and blue pixels, and when they can figure out green ones, they'll be able to make full color displays. Despite being millimeters from your retinas, the images created by the lenses will be in perfect focus, and when the display is turned off, everything will be transparent. In the meantime, we've already got eyeball-mounted wireless sensors for detecting things like blood glucose levels, so it's really just a matter of time before LEDs and their associated electronics get small enough and cheap enough that we can all afford to be enjoying visual overlays of stupid YouTube videos 24/7.

Electronic Projects For Beginners I made a guide for those people who are still starting with their electronics hobby. I started connecting wires, batteries, bulbs, buzzers and motors when I was 4 years old . Now that I am 13 years old, I now have a good amount of experience to build complicated electronic circuits. Learning electronics isn't that easy but if you put love and passion to it, I assure you that you would enjoy building your own experiments. It takes years of jamming parts, soldering, gluing projects to become a good hobbyist. By fulfilling these projects that where shared by different Instructable members, I can assure you, with a little bit of passion and practice, you could become successful with your future experiments and inventions. It took me hours to finish making this guide since there is no software editor in the Sibmit>Guide in the "Submit Instructable Section" I had to type every word and picture using HTML codes which I learned from school. How To Solder by: noahw Third Hand by: rstraught

The Story of Stuff