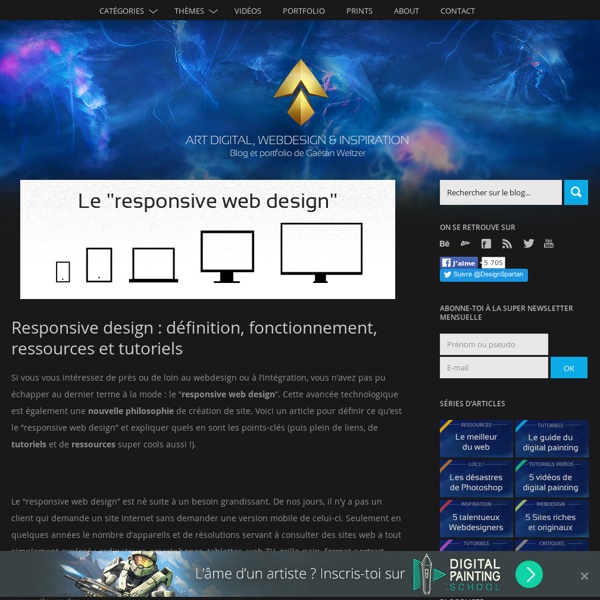 Responsive Design Templates Responsive website templates are well-suited for those developers who envision themselves having both fluid-width and adaptive website that caters for any possible screen resolution. This means that every single responsive template seamlessly serves different media formats and devices people use to enter the website that is based on this template. TemplateMonster produces responsive web design templates that each has 4 primary layout options and a bunch of additional ones. 50 fantastic tools for responsive web design As introduced/coined by Ethan Marcotte in both his article "Responsive Web Design" as well as his best-selling book, one needs three elements to make a site responsive: A flexible/fluid grid Responsive images Media queries There are plenty of other great articles that cover motives, concepts, and techniques regarding responsive web design, so we'll keep the focus of this article on some top tools that will help you become responsibly responsive. Tools for starting out

CSS Zen Garden: The Beauty of CSS Design So What is This About? There is a continuing need to show the power of CSS. The Zen Garden aims to excite, inspire, and encourage participation. 15 More Responsive CSS Frameworks & Boilerplates Worth Considering Following on from 15 Responsive CSS Frameworks Worth Considering, which we published last November, today we have 15 more for you to consider. All of the frameworks and boilerplates below have been built with strict compliance to standards and conventions and will, as you would expect from any CSS framework, save your precious time by eliminating the need to write any of the base CSS styles yourself and, more importantly, helping you solve any tricky responsive layout issues you may have. Gumby 960 Grid Responsive CSS Framework Gumby offers a choice of either downloading the 12 column version, 16 column version, hybrid 12/16 column version or absolutely everything in a single bundle.

Windows Desktop UI Concept Posted by Sputnik8 on February 24, 2012 10:24 pm This is a desktop concept that I’ve recently put together for fun. I thought I’d post a few screens to see what people here think. Tag "Responsive Design" on Smashing Mobile The aim of republishing the original article by Yoav is to raise awareness and support the discussion about solutions for responsive images. We look forward to your opinions and thoughts in the comments section! – Ed. It’s been a year since I last wrote about it, but the dream of a “magical” image format that will solve world hunger and/or the responsive images problem (whichever comes first) lives on.

Website speed test Nobody Likes a Slow Website We built this Website Speed Test to help you analyze the load speed of your websites and learn how to make them faster. It lets you identify what about a web page is fast, slow, too big, what best practices you’re not following, and so on. We have tried to make it useful both to experts and novices alike. How to Create (Animated) Text Fills A tutorial on how to create various types of (animated) fills and strokes for text using different techniques including CSS and SVG. View demo Download source I like to think that the future is already here. We have already so many exciting possibilities in CSS and SVG that some time ago we could only dream about. 20 tools to help you create responsive web designs Building responsive design has become a huge trend in the web design world. There is a good reason for that: responsive websites are much more relevant than fixed web designs in a time where a lot of internet traffic comes from mobile devices. In this article we take a look at some of the most useful tool to help you with the creation of responsive designs. Sketching / wireframing tools First things first, responsive design need to be well-thought or you’ll get much more work than you would have otherwise.

40 Free Fonts to Use with @font-face The @font-face allows the web users to download a specific font from the internet and can install them on your computer. There is no necessity that the web designers need to stick to a particular set of fonts that are already available, they could just choose and download any type of fonts from the webpage. Of course, there are a handful of fonts available on the web but however, the CSS rule of @font-face offers the simplest, strongest, and the most flexible designs of the fonts. Responsive Web Designs For Inspiration - 40 Examples Things are changing in the tech world and the migration of users from PC to tablets or phones adds modifications to the way web sites are designed because web sites have to be optimized for these new platforms. In the old days, which are not that old, designers would complain about having to make a website compatible with desktop browsers, which is child’s play comparing to the times we are living now. Nowadays, almost each client you are getting asks for a mobile version of his site and that’s not a simple task either.

CSS3 Hidden Social Buttons Today we’ll be looking at some very simple techniques using CSS3 transforms to make social link buttons. Usually you’ll see these links all over a site sitting there making a site look ugly. With this technique, we’ll style our buttons with our own CSS, and then let the like/follow/+1 button appear on hover.