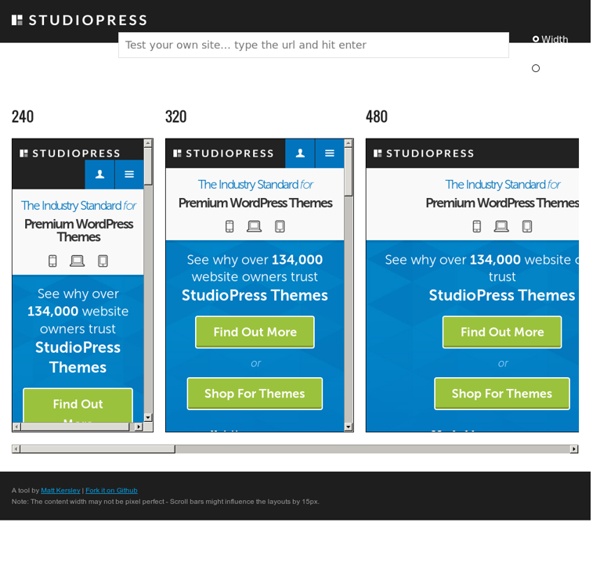 Cross Browser Testing. Real mobile devices & browsers! Responsive Web Design The English architect Christopher Wren once quipped that his chosen field “aims for Eternity,” and there’s something appealing about that formula: Unlike the web, which often feels like aiming for next week, architecture is a discipline very much defined by its permanence. Article Continues Below A building’s foundation defines its footprint, which defines its frame, which shapes the facade. Each phase of the architectural process is more immutable, more unchanging than the last. Creative decisions quite literally shape a physical space, defining the way in which people move through its confines for decades or even centuries. Working on the web, however, is a wholly different matter. But the landscape is shifting, perhaps more quickly than we might like. In recent years, I’ve been meeting with more companies that request “an iPhone website” as part of their project. A flexible foundation#section1 Let’s consider an example design. Becoming responsive#section2 responsive architecture .

Responsive, Fluid-Width, Variable-Item Navigation with CSS Around six months ago I was asked to develop a single row navigation bar that could contain a variable number of menu items while filling the entire width of the container. The amount of navigational items was dictated elsewhere and likely to change in future. Thinking ahead, it would have been impractical to change the CSS every time a menu item was added or removed. Using Percentage Widths Fixed widths are unable to consistently fill the responsive container, as the below image illustrates. So we need to use percentages to accomplish this. For example, take the below familiar HTML into consideration: And we’ll add the following CSS: Areas of note are: The <nav> element is given width: 100% to fill the entire available space. The result of adding these styles is shown in the CodePen demo below: Open it in a new window and test it out for responsiveness. What if We Add or Remove Items? Here’s what happens if we remove one item from the navigation, with our current CSS in place:

Gestalt Principles Applied in Design By Michael Tuck Web designers, like other artists and craftsmen, impose structure on the environment. We enforce order and beauty on the formless void that is our blank computer screen. We do it in different ways — creating an organized layout first, writing text and content first, or even basing a design concept on an image, a color palette, or something that visually trips your trigger, whether it’s a sunset or a Song Dynasty painting. Wherever you gain your inspiration, it’s often not just the particular element that sparks your artistic impulse; it’s the totality of the element and its surroundings. Grasping that totality concept — both the individual element and the whole in which it exists are important both separately and together — is essential to understanding how gestaltism influences our design choices. We’ll cover 6 principles related to gestalt, in the context of design, and they are: ProximitySimilarityPrägnanz (Figure-Ground)Symmetry"Common Fate"Closure Source: Dr. Mr. Symmetry

Domestic violence hotline faces spike in demand Updated Introduction "Has he hit you?" It's just after 10:00am in an open-plan office in inner-city Brisbane. "So, he has hit you in the past?" On the phone, a staff member from DV Connect — the Queensland-wide crisis counselling and emergency accommodation service for people experiencing domestic violence — tries to ascertain just how much danger the caller on the other end of the line is in. Demand out of control By this point in 2015, six women, two unborn babies, one child and one man have died in Queensland as a result of domestic violence. On this call, one of more than 200 the service will receive over the course of the day, the woman's answers will help determine a threat level. "She was right in the middle of nowhere, so isolated, and she was really, really frightened. Today, about a dozen telephone operators are taking calls from across the state. The service overwhelmingly deals with situations in which the victim is female and the perpetrator male. 'I am a dead woman talking'

Redirecting to url Erhvervsakademiet Copenhagen Business Academy Your Web browser "Firefox 17.0 for Ubuntu" may not be fully supported by Fronter. Please refer to the Fronter support site (frontersupport.com) for a list of supported browsers. <blockquote class="message error"> Warning: Javascript is turned off. You will be redirected to main.phtml? Collection Spans Five Centuries of Women’s History Durham, NC - The David M. Rubenstein Rare Book & Manuscript Library at Duke University has acquired one of the largest and most significant private collections on women’s history, documenting the work and intellectual contributions of women from the Renaissance to the modern era. Carefully assembled over 45 years by noted bibliophile, activist and collector Lisa Unger Baskin, the collection includes more than 8,600 rare books and thousands of manuscripts, journals, ephemera and artifacts, including author Virginia Woolf’s writing desk. Among the works are many well-known monuments of women’s history and literature, as well as lesser-known works produced by female scholars, printers, publishers, scientists, artists and political activists. “We are honored to be the institutional home of this spectacular collection,” said Deborah Jakubs, Rita DiGiallonardo Holloway University Librarian and Vice Provost for Library Affairs. Below, letters and photos from the Emma Goldman Collection.

What Makes a Design Seem 'Intuitive'? By Jared M. Spool Originally published: Jan 10, 2005 In a recent usability test, I once again witnessed something I've seen a hundred times before: a frustrated user claiming he knows exactly what is wrong with the interface he was fighting with. What was his suggestion? I think he used the I-Word no less than 25 times during the session. People Intuit, not Interfaces To those who police the English language, interfaces can't be intuitive, since they are the behavior side of programs and programs can't intuit anything. But, I believe that English is an adaptable medium, so it's ok with me if we call a design intuitive. To answer that question, we first have to look at how people understand the design in the first place. Current and Target Knowledge Points Imagine a long wall where you'll line up all the users who will use your design. On the right side, we'll put everyone who knows everything there is to know about the design. The Knowledge Gap The Knowledge Gap is where design happens.

Responsibility of Hijab for Man and Woman | The Islamic Hijab (Veil) Let us scrutinize the required important matters for both sexes in order to specify the difference in responsibility between them concerning this framework of Islamic hijab. Both man and woman are responsible according to the following verse of the Holy Qur'an: "Say to the believing men that they cast dawn their looks and guard their private parts; that is purer for them; surely Allah is Aware of what they do. And say to the believing women that they cast down their looks and guard their private parts and not display their ornaments except what appears there of, and let them wear their head-coverings over their bosoms, and not display their or name except to their husbands..." (Holy Qur’an, 24:30-31). The great jurisprudents (fuqaha) have cited explanations for these edicts: A. B. C. D. E. F. G. H. I. J. K. L. M. The fact, which no fair-minded person can doubt, is that the reason for the specification of covering a woman's body alone relates to her sentimental and physical qualities.

Personality in Design Our lasting relationships center around the unique qualities and perspectives we all possess. We call it personality. Through our personalities, we express the entire gamut of human emotion. Personality is the platform for emotion#section1 Interface design lives in a broader category called Human-Computer Interaction, or HCI, sitting among computer science, behavioral science, and design. I’ll let you in on a secret. Emotional design’s primary goal is to facilitate human-to-human communication. I’d like you to pause for a moment, and recall a person with whom you recently made a real connection. Hold on to that memory. Let’s think of our designs not as a facade for interaction, but as people with whom our audience can have an inspired conversation. Once again, history can inform our work today. A Brief History of Personality in Design#section2 We have a history of injecting personality into the things we make, in a bid to make mechanical things more human. Personas#section3

The Messy Art Of UX Sketching Advertisement I hear a lot of people talking about the importance of sketching when designing or problem-solving, yet it seems that very few people actually sketch. As a UX professional, I sketch every day. I often take over entire walls in our office and cover them with sketches, mapping out everything from context scenarios to wireframes to presentations. My desk. Although starting a prototype on a computer is sometimes easier, it’s not the best way to visually problem-solve. Many articles discuss the power of sketching and why you should do it, but they don’t go into the how or the methods involved. Sketching ≠ Drawing Some of the most effective sketches I’ve seen are far from perfect drawings. Sketching is an expression of thinking and problem-solving.It’s a form of visual communication, and, as in all languages, some ways of communicating are clearer than others.Sketching is a skill: the more you do it, the better you’ll get at it. OK, let’s get started. Work In Layers Technique Why? Tools

Color Theory for Designers, Part 1: The Meaning of Color Color in design is very subjective. What evokes one reaction in one person may evoke a very different reaction in somone else. Sometimes this is due to personal preference, and other times due to cultural background. Color theory is a science in itself. Studying how colors affect different people, either individually or as a group, is something some people build their careers on. This is the first in a three-part series on color theory. Warm Colors Link Warm colors include red, orange, and yellow, and variations of those three colors. Red and yellow are both primary colors, with orange falling in the middle, which means warm colors are all truly warm and aren’t created by combining a warm color with a cool color. Red (Primary Color) Link Red is a very hot color. Red can be associated with anger, but is also associated with importance (think of the red carpet at awards shows and celebrity events). Outside the western world, red has different associations. Examples Cool Colors Link Gray Link

95 amazing Adobe Illustrator tutorials | Illustrator Since its release, Adobe's Illustrator has grown to become the designer's right-hand man when it comes to creating premier vector graphics and elements. There's so much you can do with it that it can be difficult to know where to start. Happily, we're here to round up the best Adobe Illustrator tutorials, covering everything from illustration to logo design, adding depth to your typography and much more, to help you get the most from this amazing app. Jump directly to a section using this handy category guide, or just get started browsing the whole list! With so many to choose from, you're sure to find a project to inspire you, whether you're using an older version of Illustrator or are signed up to the Creative Cloud. Here goes! Adobe Illustrator for beginners: 11 top tips If you're just starting out with Illustrator, here's a fantastic guide to some of its tools. Setting up a new document Essentials of the Pen and Pencil tools Creating objects with the Shape tools Empty list