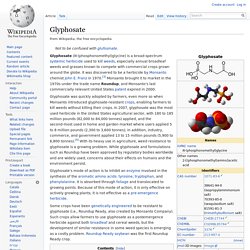 It was discovered to be a herbicide by Monsanto chemist John E. Franz in 1970.[3] Monsanto brought it to market in the 1970s under the trade name Roundup, and Monsanto's last commercially relevant United States patent expired in 2000. Glyphosate was quickly adopted by farmers, even more so when Monsanto introduced glyphosate-resistant crops, enabling farmers to kill weeds without killing their crops. Glyphosate's mode of action is to inhibit an enzyme involved in the synthesis of the aromatic amino acids: tyrosine, tryptophan, and phenylalanine. It is absorbed through foliage and translocated to growing points. Some crops have been genetically engineered to be resistant to glyphosate (i.e., Roundup Ready, also created by Monsanto Company). Discovery[edit] Chemistry[edit] Use[edit] Glyphosate_54_MSDS.pdf. Mythbusting 101: Organic Farming > Conventional Agriculture.

People believe a lot of things that we have little to no evidence for, like that vikings wore horned helmets or that you can see the Great Wall of China from space. One of the things I like to do on my blogs is bust commonly held myths that I think matter. For example, I get really annoyed when I hear someone say sharks don’t get cancer (I’ll save that rant for another day). From now onward, posts that attack conventionally believed untruths will fall under a series I’m going to call “Mythbusting 101.” Ten years ago, Certified Organic didn’t exist in the United States. Yet in 2010, a mere eight years after USDA’s regulations officially went into effect, organic foods and beverages made $26.7 billion. Here’s the thing: there are a lot of myths out there about organic foods, and a lot of propaganda supporting methods that are rarely understood. Myth #1: Organic Farms Don’t Use Pesticides So was I, when I first learned this from a guy I was dating.

Take the example of Rotenone. Joseph D. Myths: Busted—Clearing Up the Misunderstandings about Organic Farming. The views expressed are those of the author and are not necessarily those of Scientific American. 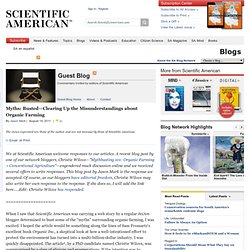 We at Scientific American welcome responses to our articles. A recent blog post by one of our network bloggers, Christie Wilcox—”Mythbusting 101: Organic Farming > Conventional Agriculture“—engendered much discussion online and we received several offers to write responses. This blog post by Jason Mark is the response we accepted. Of course, as our bloggers have editorial freedom, Christie Wilcox may also write her own response to the response. If she does so, I will add the link here…..Edit: Christie Wilcox has responded. When I saw that Scientific American was carrying a web story by a regular SciAm blogger determined to bust some of the “myths” surrounding organic farming, I was excited.

As the co-manager of an urban farm2 that uses organic practices, I was annoyed by the distortions in the article. Busting Myth #1: Organic Farms and Pesticides. Which brings us to Wilcox’s next point. In the immortal words of Tom Petty: “I won’t back down” The views expressed are those of the author and are not necessarily those of Scientific American. 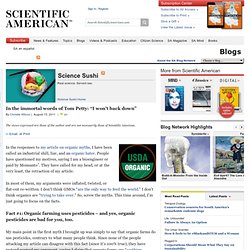 In the responses to my article on organic myths, I have been called an industrial shill, liar, and an organic hater. People have questioned my motives, saying I am a bioengineer or paid by Monsanto*. They have called for my head, or at the very least, the retraction of my article. In most of them, my arguments were inflated, twisted, or flat-out re-written. I don’t think GMOs “are the only way to feed the world.” Fact #1: Organic farming uses pesticides – and yes, organic pesticides are bad for you, too. My main point in the first myth I brought up was simply to say that organic farms do use pesticides, contrary to what many people think. I didn’t say either of those things. Oh, really? Let’s look at the details, shall we?