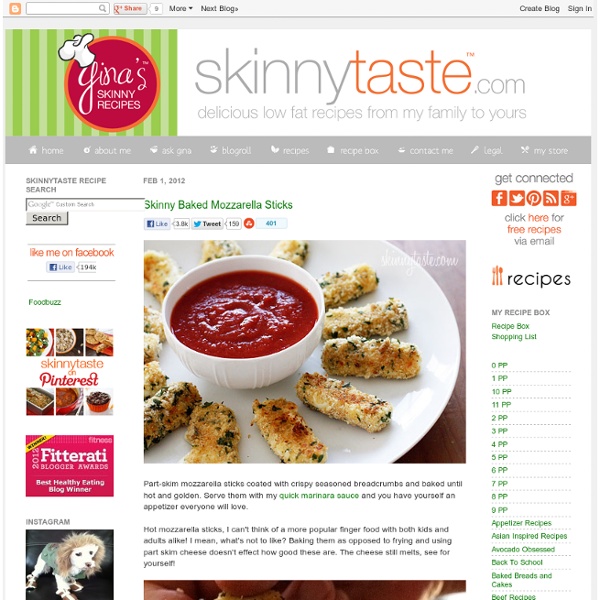 Part-skim mozzarella sticks coated with crispy seasoned breadcrumbs and baked until hot and golden. Serve them with my quick marinara sauce and you have yourself an appetizer everyone will love. Hot mozzarella sticks, I can't think of a more popular finger food with both kids and adults alike! I mean, what's not to like? Baking them as opposed to frying and using part skim cheese doesn't effect how good these are. The cheese still melts, see for yourself! Of course, you'll want to serve them hot right out of the oven, because like any cheese, as they cool they harden. It actually took me several attempts to get these perfect. These are freezer friendly, in fact these MUST be frozen before you bake them or you will have one big cheesy mess in your oven! Skinny Baked Mozzarella SticksSkinnytaste.comServings: 12 • Serving Size: 2 pieces • Old Points: 1 pts • Points+: 2 pts*Calories: 86.8* • Fat: 4.8 g • Protein: 7.4 g • Carb: 3.5 g • Fiber: 0.2 g • Sugar: 0.2Sodium: 168.6 Ingredients:

QUINOA CAULIFLOWER PATTIES Rinse the quinoa. Put the quinoa and 2 cups water in a medium pot. Bring it up to a boil, add a pinch of salt and pepper, turn it down to a simmer and cover and cook for 15 minutes. Fluff with a fork, turn off the heat, set the lid ajar to rest. In a food processor, pulse the cauliflower until it resembles cous cous. Panko Mozzarella Sticks! I first discovered panko bread crumbs back in 1999. Please don’t ask me how I know that; I just do. I remember vividly reading a recipe that contained panko bread crumbs, and I remember vividly that I was nursing my second baby, and I remember vividly that I was hormonal and desperate, and the next thing I knew I was ordering panko bread crumbs from some market in Chelsea that the magazine recommended. On the phone, of course, because although I had a computer at the time, I certainly wouldn’t have been cool enough to use it to order panko bread crumbs.

Top Green Smoothie Recipes Details Strawberry Mint Popsicles Banana-free, Healthy Treats, Kid-friendly Piña Colada Pops 5 Ingredient or less, Banana-free, Healthy Treats, Kid-friendly Dijon Chicken Club Sandwiches By the time I get home from work, I often don't feel like cooking a big meal. But if I've done some of the prep work in advance, it becomes really easy. This is pretty much my weekday plan. If I didn't do this, we would end up eating out a lot more often, or making frozen pizzas.

Quick Dinner Recipe: Saucy Sautéed Shrimp over Lemon Quinoa Everyone needs a few quick meals in their weeknight repertoire that feel like cooking cooking. You know, the kind where you pop open a bottle of wine to splash into the pan, and flourish your knife over an onion and some garlic, sautéing and shaking a skillet, cooking up a hot and delicious meal like a boss. The best thing about a dinner like this, however, is when it takes just 20 minutes. Because as fun as cooking can be, it's also good to eat.

Petite Lasagnas recipe slightly adapted from Hungry Girl (makes 12) 12 oz raw ground turkey The Simple Delights Even though I have had some rough egg experiences lately…the century egg, and little birdie fetus…I have not given up on one of my favorite foods. While eggs can be made to taste more disgusting than I ever thought possible, they can also be creamy, protein packed perfection and in the case of the baked egg cup, they are just that! The other morning, we had our friend Zach and one of his friends over for breakfast. Beer Battered Onion Rings One day, months ago, after Ben and I were watching a show on the Food Network about fried foods, Ben had asked me to recreate the beer battered onion rings that were featured. Knowing I’m not one to frequently bust out a vat of oil to “waste” on frying, I quickly filed his request in the very back of my mind. No, seriously, the very back shelf of my brain that is probably full of dust and other undesirable recipe requests.

Chicken Tikka Masala Although chicken tikka masala is more British than Indian, you'd be hard-pressed to find an Indian restaurant that doesn't have this creamy, bright-orange dish featured prominently on its menu. But if you do, you're welcome to come to my house, where chicken tikka masala is on our regular monthly meal rotation. It's surprisingly easy to pull together, and I promise it's just as good as anything ordered off the take-out menu. There are probably as many recipes and versions of chicken tikka masala as there are cooks who make it. Even the Wikipedia page on the dish notes that in a survey of 48 recipes, the only common ingredient was chicken. My version probably looks similar — and different — than many other recipes you may have come across, but this is the one that I've made my own.

Creamy Blue Cheese Habanero Penne Of all the hot things I've made this week, this was the best by far. In fact, I'd be willing to say that this was the best thing I've ever eaten that was this intensely spicy. The cream in this recipe really helps to take the edge off the peppers and really brings out that unique habanero flavor. We were all sweating and crying as we ate, but that didn't stop anyone from getting seconds and even thirds. Onion, garlic, and the habaneros. Almost as many habaneros as onions!