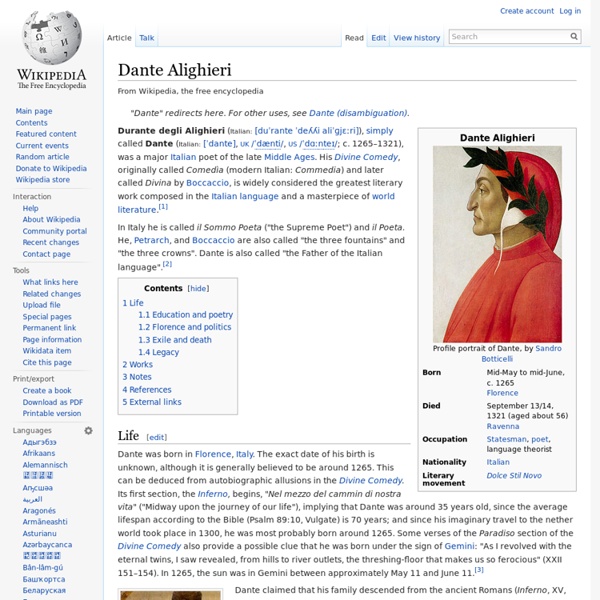 Durante degli Alighieri (Italian: [duˈrante ˈdeʎʎi aliˈɡjɛːri]), simply called Dante (Italian: [ˈdante], UK /ˈdænti/, US /ˈdɑːnteɪ/; c. 1265–1321), was a major Italian poet of the late Middle Ages. His Divine Comedy, originally called Comedìa (modern Italian: Commedia) and later called Divina by Boccaccio, is widely considered the greatest literary work composed in the Italian language and a masterpiece of world literature.[1] In Italy he is called il Sommo Poeta ("the Supreme Poet") and il Poeta. He, Petrarch, and Boccaccio are also called "the three fountains" and "the three crowns". Dante is also called "the Father of the Italian language".[2] Life[edit] Portrait of Dante, from a fresco in the Palazzo dei Giudici, Florence Dante claimed that his family descended from the ancient Romans (Inferno, XV, 76), but the earliest relative he could mention by name was Cacciaguida degli Elisei (Paradiso, XV, 135), born no earlier than about 1100. Dante in Verona, by Antonio Cotti Legacy[edit]

The Golden Bough The Golden Bough: A Study in Comparative Religion (retitled The Golden Bough: A Study in Magic and Religion in its second edition) is a wide-ranging, comparative study of mythology and religion, written by the Scottish anthropologist Sir James George Frazer (1854–1941). It was first published in two volumes in 1890; in three volumes in 1900; the third edition, published 1906–15, comprised twelve volumes. The work was aimed at a wide literate audience raised on tales as told in such publications as Thomas Bulfinch's The Age of Fable, or Stories of Gods and Heroes (1855). Frazer offered a modernist approach to discussing religion, treating it dispassionately[1] as a cultural phenomenon rather than from a theological perspective. The influence of The Golden Bough on contemporary European literature and thought was substantial.[2] Subject matter[edit] The king was the incarnation of a dying and reviving god, a solar deity who underwent a mystic marriage to a goddess of the Earth.

Dante Alighieri on the Web On The Waste Land On The Waste Land Cleanth Brooks The bundle of quotations with which the poem ends has a very definite relation to the general theme of the poem and to several of the major symbols used in the poem. Before Arnaut leaps back into the refining fire of Purgatory with joy he says: "I am Arnaut who weep and go singing; contrite I see my past folly, and joyful I see before me the day I hope for. The quotation from "El Desdichado," as Edmund Wilson has pointed out, indicates that the protagonist of the poem has been disinherited, robbed of his tradition. The quotation from The Spanish Tragedy--"Why then Ile fit you. Datta. Quotation of the whole context from which the line is taken confirms this interpretation. Why then, I'll fit you; say no more. He sees that the play will give him the opportunity he has been seeking to avenge his son's murder. After this repetition of what the thunder said comes the benediction: Shantih Shantih Shantih From Modern Poetry and the Tradition. Joseph Frank

The World of Dante Dante's Inferno, widely hailed as one of the great classics of Western literature, details Dante's journey through the nine circles of Hell. The voyage begins during Easter week in the year 1300, the descent through Hell starting on Good Friday. After meeting his guide, the eminent Roman poet Virgil, in a mythical dark wood, the two poets begin their descent through a baleful world of doleful shades, horrifying tortures, and unending lamentation. This edition of the Inferno is edited in XML (Extensible Markup Language), which allows users to perform searches for a wide range of entities across the entire poem. Above the Italian and English texts users will see a band listing six categories. Every canto also contains visual material, keyed to specific passages.

Three Steps to Critical Thinking Edward Charles Francis Publius de Bono is a bona fide genius. The author, inventor, Rhodes scholar and Nobel prize-nominated economist graduated from college at age 15. In the field of education and business, he is famous for originating the term lateral thinking. Creative and Critical Thinking Can Be Taught De Bono repeats throughout his writing that critical and creative thinking can be taught. Teaching scenario #1 When you ask a volunteer from your AP English class to analyze the Gettysburg Address, not one hand raises. Teaching scenario #2 You post an anonymous 10th grade argumentative essay on the document camera for your students to critique, but the same three volunteers who always answer are the only kids with comments to contribute. Teaching scenario #3 You want to prime your 7th grade social studies students to look more deeply at the pros and cons of gun control legislation. Teaching scenario #4 The PMI Steps Step 1 Step 2 Step 3 The PMI in Action Whew!

Paradiso (Dante) The Paradiso assumes the medieval view of the Universe, with the Earth surrounded by concentric spheres containing planets and stars. The Paradiso begins at the top of Mount Purgatory, at noon on the Wednesday after Easter. After ascending through the sphere of fire believed to exist in the earth's upper atmosphere (Canto I), Beatrice guides Dante through the nine celestial spheres of Heaven, to the Empyrean, which is the abode of God. During the course of his journey, Dante meets and converses with several blessed souls. "But all those souls grace the Empyrean; and each of them has gentle life though some sense the Eternal Spirit more, some less However, for Dante's benefit (and the benefit of his readers), he is "as a sign"[3] shown various souls in planetary and stellar spheres that have some appropriate connotation. On visiting the Moon, Beatrice explains to Dante the reasons for its markings, Canto 2. The florin, the "damned flower," Canto 9. An imperial eagle.

Divine Comedy: Paradiso Wikipedia | The Empyrean This content is from Wikipedia. GradeSaver is providing this content as a courtesy until we can offer a professionally written study guide by one of our staff editors. We do not consider this content professional or citable. Please use your discretion when relying on it. From the Primum Mobile, Dante ascends to a region beyond physical existence, the Empyrean, which is the abode of God. "Like sudden lightning scattering the spirits of sight so that the eye is then too weak to act on other things it would perceive,such was the living light encircling me, leaving me so enveloped by its veil of radiance that I could see no thing.The Love that calms this heaven always welcomes into Itself with such a salutation, to make the candle ready for its flame Dante sees an enormous rose, symbolising divine love,[45] the petals of which are the enthroned souls of the faithful (both those of the Old Testament and those of the New). St. Within these circles Dante can discern the human form of Christ.

Numerology of Nine Grades of Angels. The world tree or mountain are conditional symbols of a centre where there is the global vertical axis, that in aggregate with a horizontal surface of the world forms coordinates of world space. Namely vertical global axis corresponds with the central numerological number 5 which is in the centre of magic square of nine numbers in a context of numerology, and other numbers of the magic square symbolize horizontal measurements of the world. Horizontal and vertical measurements of the world are congruous, namely vertical axis has numerical gradation which are projections of numbers on a horizontal surface. Accordingly physiognomy of human facial traits correspond with numerological numbers on different coordinates which designate versatile phenomena of world around, but which coincide in features of a human face. The following page compares physiognomy of a human face to circles of the universe in the Divine Comedy of Dante Alighieri. previous - upwards - following