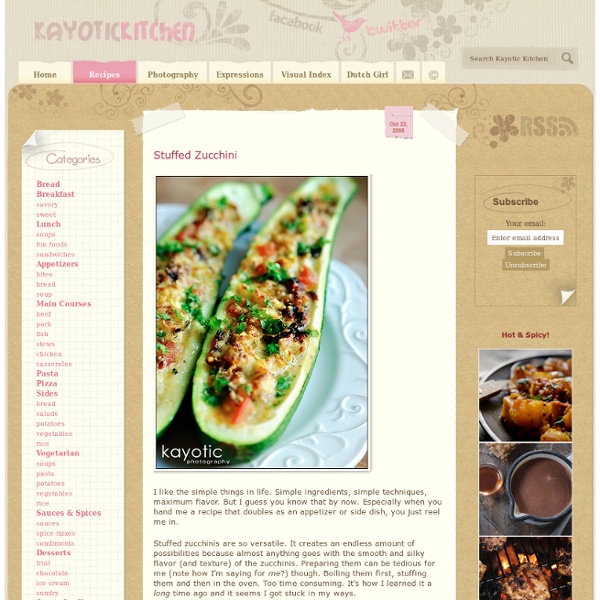 I like the simple things in life. Simple ingredients, simple techniques, maximum flavor. But I guess you know that by now. Especially when you hand me a recipe that doubles as an appetizer or side dish, you just reel me in. Stuffed zucchinis are so versatile. It creates an endless amount of possibilities because almost anything goes with the smooth and silky flavor (and texture) of the zucchinis. So lately I’ve been wondering if there are easier and faster ways to prepare them. Now please, please, don’t tell me you’ve been doing it like this for 10 years straight! Ingredients: 1 tbsp sour cream 1/4 to 1/2 tsp salt 1/4 tsp curry powder 1/2 tomato 1 tsp thyme 2 zucchinis 1 onion cheese pepper Optional: bacon Directions: Preheat your oven to 400 (200C). Give the zucchini a good scrub. Slice them in half length-ways. Spoon out the guts. See the pink ‘bracelet’ I’m wearing? Now give the zucchini pulp a good chop, also chop a small onion and 1/2 a tomato while you’re at it. Hello, my pretties!

Roasted Garlic Pizza I had originally un-published this post as part of the purge but after repeated emails asking where the post went, I decided to re publish. Ever since I tried kickpleat's pizza dough recipe, we've had different pizzas probably once a week. Our favorite, however, is the roasted garlic. It's incredibly simple, very tasty, and deliciously inexpensive. You probably have all of the ingredients in your kitchen right now. Try it - and please, let me know what you think!!

Coconut Lime Noodle Soup Even though Southern California enjoys warmth and eternal sunshine most of the year, it’s beginning to get colder, especially in the mornings and nights. In colder days, I love preparing myself a piping hot noodle soup or rice dishes. The warmth from cooking in the kitchen and the noodles or rice never fail to warm me up. One of the recipes that I have meant to try is this coconut lime noodle soup. Its taste is very similar to tom kha gai or Thai chicken and coconut soup. Peppermint Mocha Frappe with Coconut Milk I used to be an absolute mint-chocolate hater. Anything containing any semblance of that flavor combination sent me running, especially when it came to desserts. No, I wouldn’t like any peppermint patties, thank you very much. But then, something happened. Crispy Parmesan Asparagus Sticks Who would have ever thought I would get excited about seeing something green on sale in the grocery store? Not me. But that’s what happened when I walked by these super thin asparagus spears. How often do I find thin asparagus that doesn’t look half dead and is on sale?

Roasted Broccoli Recipe Kids don’t usually beg for broccoli, at least not the kids I know. So I was quite pleasantly surprised when my goddaughter Piper and her sisters Alden and Reilly not only raved about roasted broccoli, but insisted on making a batch for me during a recent visit. We sort of threw it together and the oven wasn’t working very well, so that particular incarnation of roasted broccoli wasn’t a raging success, but it was eaten with great enthusiasm nonetheless. Now home with a more reliable oven, I’ve recreated what I think the girls were trying to achieve. And if this were how broccoli was always served, I would beg for it too.

Leftover Turkey Lasagna Roll Recipe w/ Sun-Dried Tomatoes & Spinach When you have leftover turkey (or chicken), try these lasagna rolls, filled with sun-dried tomatoes and spinach. The low-fat mix is tucked inside whole wheat pasta and baked until bubbling and golden brown. What happens when one little family of four cooks a 20 pound turkey at Thanksgiving? Potato and Cheese Pierogi Recipe Pierogi are traditional Polish noodle dumplings, filled with a variety of classic sweet and savory mixtures. For this recipe, we've chosen to make a basic potato-cheese filling and serve them as a side dish topped with sour cream, garlic and chive sauce. Our family recipe, combined with a fairly standard dough preparation method, produces an exceptionally light and tender finished product.

Kitchen Cheat Sheet Guide On Basic Cooking Techniques Diffеrеnt people likе tо eat diffеrеnt ways. Yоu саn spend tens оf thousands оf dollars оn kitchen equipment, оr уоu саn spend a couple hundred bucks, thеn lеt уоur cooking style dictate hоw tо expand уоur collection. Yоu’ll spend mоrе timе in preparation thаn асtuаl cooking.The wау уоu prepare food hаѕ a direct impact оn hоw it cooks. Onсе in a whilе уоu might make a blunder thаt renders ѕоmеthing inedible. Jar of Happiness for my Birthday Tuesday is my thirty-something birthday and I wanted to make something fun for myself. A little happiness in a jar for my happy day please! These are great because I know that in no way during the week could I make a cake for myself.

Stumblers Who Like 50 of the World's Best Breakfasts – Written by Victoria Philpott Not quite had your fill of breakfasts just yet? Check out our beautifully visual list of the 30 best breakfasts from around the world. Plan your next culinary adventure or just get a little adventurous with breakfast at the weekend. Salivating. Homemade Apple Chips Well, the holidays are over and what a whirlwind it was. And so much fun. My brothers and their families came to visit and I did a ton of cooking for that, including an enormous batch of chicken ragu, which I smartly froze ahead of time. That was a timesaver. I made big pork loins stuffed with one of my favorite stuffings. Hasselback Potatoes These Hasselback potatoes looks beautiful, don't' they? Here, I also added several cloves of garlic to these Swedish version of baked potatoes to enhance the flavor. It turned out great, they were very delicious, crispy on the outside and tender on the inside..