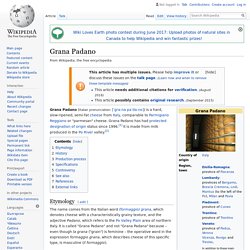 Grana Padano has had protected designation of origin status since 1996.[1] It is made from milk produced in the Po River valley.[2] Etymology[edit] History[edit] Grana Padano is one of the world's first hard cheeses, created nearly 900 years ago by the Cistercian monks of Chiaravalle Abbey, founded in 1135 near Milan[1] By the year 1477, it was regarded as one of the most famous cheeses of Italy. [according to whom?] Production process[edit] Like Parmigiano Reggiano, Grana Padano is a semi-fat hard cheese which is cooked and ripened slowly for at least nine months. Some of the producers operate large operations. On an annual basis, the Grana Padano consortium exports € 750 million (£570 million) of their product.[4] Provolone - Wikipedia. History and varieties[edit] Modern provolone is a full-fat cow's milk cheese with a smooth skin, produced mainly in the Po River Valley regions of Lombardia and Veneto. 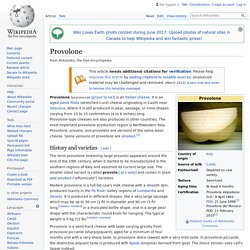 It is produced in different shapes: like a very large sausage which may be up to 30 cm (1 ft) in diameter and 90 cm (3 ft) long,[citation needed] in a truncated bottle shape, and in a large pear shape with the characteristic round knob for hanging. The typical weight is 5 kg (11 lb). [citation needed] Provolone is a semi-hard cheese with taste varying greatly from provolone piccante (sharp/piquant), aged for a minimum of four months and with a very sharp taste, to provolone dolce (sweet) with a very mild taste.

Both provolone valpadana and provolone del Monaco (from the Naples area of Italy) have received the DOP (Protected Designation of Origin) seal from the European Community. Scamorza - Wikipedia. Scamorza (Italian pronunciation: [skaˈmɔrtsa]) is an Italian cow's milk cheese. 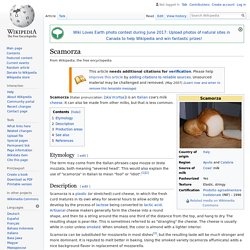 It can also be made from other milks, but that is less common. Etymology[edit] The term may come from the Italian phrases capa mozza or testa mozzata, both meaning "severed head". This would also explain the use of "scamorza" in Italian to mean "fool" or "idiot".[1][2] Description[edit] Scamorza is a plastic (or stretched) curd cheese, in which the fresh curd matures in its own whey for several hours to allow acidity to develop by the process of lactose being converted to lactic acid. Scamorza can be substituted for mozzarella in most dishes[3], but the resulting taste will be much stronger and more dominant. 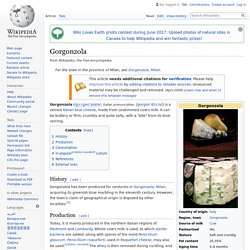 It can be buttery or firm, crumbly and quite salty, with a "bite" from its blue veining. History[edit] Gorgonzola has been produced for centuries in Gorgonzola, Milan, acquiring its greenish-blue marbling in the eleventh century. However, the town's claim of geographical origin is disputed by other localities.[2] Production[edit] Pizza Trieste with Gorgonzola and apples. During the aging process metal rods are quickly inserted and removed, creating air channels that allow the mold spores to grow into hyphae and cause the cheese's characteristic veining. Under Italian law, Gorgonzola enjoys Protected Geographical Status. Stracchino - Wikipedia. Stracchino (Italian pronunciation: [strakˈkiːno]), also known as crescenza (Italian pronunciation: [kreˈʃɛːntsa]), is a type of Italian cow’s-milk cheese, typical of Lombardy, Piedmont, Veneto, and Liguria. 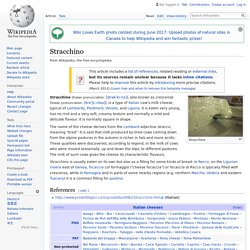 It is eaten very young, has no rind and a very soft, creamy texture and normally a mild and delicate flavour. It is normally square in shape. The name of the cheese derives from the Lombard adjective stracco, meaning "tired". Mozzarella. Mozzarella (English /ˌmɒtsəˈrɛlə/; Italian: [mottsaˈrɛlla]) is a southern Italian cheese traditionally made from Italian buffalo milk by the pasta filata method. 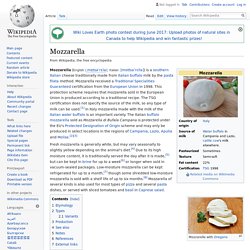 Mozzarella received a Traditional Specialities Guaranteed certification from the European Union in 1998. This protection scheme requires that mozzarella sold in the European Union is produced according to a traditional recipe. The TSG certification does not specify the source of the milk, so any type of milk can be used.[1] In Italy mozzarella made with the milk of the Italian water buffalo is an important variety. The Italian buffalo mozzarella sold as Mozzarella di Bufala Campana is protected under the EU's Protected Designation of Origin scheme and may only be produced in select locations in the regions of Campania, Lazio, Apulia and Molise.[2][3] Ricotta - Wikipedia. Ricotta (pronounced [riˈkɔtta] in Italian) is an Italian whey cheese made from sheep, cow, goat, or Italian water buffalo milk whey left over from the production of cheese. 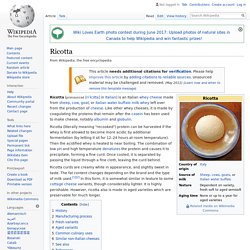 Like other whey cheeses, it is made by coagulating the proteins that remain after the casein has been used to make cheese, notably albumin and globulin. Ricotta (literally meaning "recooked") protein can be harvested if the whey is first allowed to become more acidic by additional fermentation (by letting it sit for 12–24 hours at room temperature). Then the acidified whey is heated to near boiling. The combination of low pH and high temperature denatures the protein and causes it to precipitate, forming a fine curd. Once cooled, it is separated by passing the liquid through a fine cloth, leaving the curd behind. Ricotta curds are creamy white in appearance, and slightly sweet in taste. 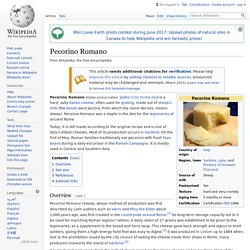 Pecorino Romano was a staple in the diet for the legionaries of ancient Rome. Today, it is still made according to the original recipe and is one of Italy's oldest cheeses. Most of its production occurs in Sardinia. On the first of May, Roman families traditionally eat pecorino with fresh fava beans during a daily excursion in the Roman Campagna.