Abstract Art: Definition, History, Types, Characteristics. Surrealist and Organic Abstraction In parallel with the development of geometric-style concretism, during the 1920s and 1930s, exponents of Surrealism began to produce a range of fantasy-like, quasi-naturalistic images. 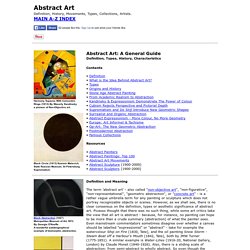 The leading exemplars of this style of Biomorphic/Organic Abstraction were Jean Arp and Joan Miro, neither of whom - as their many preparatory sketches confirm - relied on the technique of automatism. Their fellow Surrealist Salvador Dali (1904-89) also produced some extraordinary paintings like The Persistence of Memory (1931, MoMA, NY) and Soft Construction with Boiled Beans (1936, Philadelphia Museum of Art). Jean Arp was also an active sculptor who specialized in Organic Abstraction, as did the English sculptors Henry Moore (1898-1986) and Barbara Hepworth (1903-1975). (See: Modern British Sculpture 1930-70.) Impressionism: The Innovations and Influence. 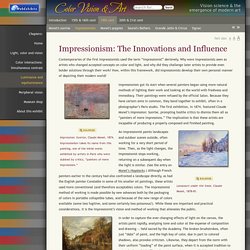 Why were Impressionists seen as artists who changed accepted concepts on color and light, and why did they challenge later artists to provide even bolder solutions through their work? How, within this framework, did Impressionists develop their own personal manner of depicting their modern world? Impression: Sunrise, Claude Monet, 1874. Impressionism takes its name from this painting, one of the initial works exhibited by artists in Paris who were dubbed by critics, “painters of mere impressions.” Impressionism got its start when several painters began using more natural methods of lighting their work and looking at the world with freshness and immediacy.

Sfumato and Chiaroscuro - Classic Painting Styles. There are two classic styles of painting which we associate with the Old Masters, sfumato and chiaroscuro, and they are as alike as cheese and chalk. 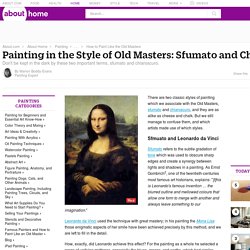 But we still manage to confuse them, and which artists made use of which styles. Sfmuato and Leonardo da Vinci Sfumato refers to the subtle gradation of tone which was used to obscure sharp edges and create a synergy between lights and shadows in a painting. As Ernst Gombrich2, one of the twentieth-centuries most famous art historians, explains: "[t]his is Leonardo's famous invention … the blurred outline and mellowed colours that allow one form to merge with another and always leave something to our imagination. " Leonardo da Vinci used the technique with great mastery; in his painting the Mona Lisa those enigmatic aspects of her smile have been achieved precisely by this method, and we are left to fill in the detail. How, exactly, did Leonardo achieve this effect? Sfumato takes us one stage further though, away from the focal point.

Use of Light in Art. Elements of Art: Light Tutorial. Actual light There are a number of ways that light affects or interacts with artwork, from how a piece is lit, to deliberately incorporating the interaction of light within the work. 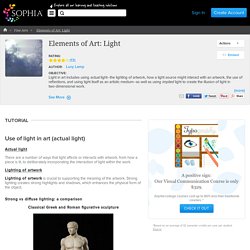 Lighting of artwork Lighting of artwork is crucial to supporting the meaning of the artwork. Strong lighting creates strong highlights and shadows, which enhances the physical form of the object. Strong vs diffuse lighting: a comparison Classical Greek and Roman figurative sculpture The Doryphoros Artist Unknown (Roman) 120-50 B.C.Pentelic marble after Polykleitos, Roman copy of Greek original, executed in bronze, c.440 B.C. one of four known extant copies 78 x 19 x 19 in. (198.12 x 48.26 x 48.26 cm) Minneapolis Institute of Arts; The John R.

Strong lighting is often used with classical Greek and Roman sculptures of the human body. Ancient Egyptian figurative sculpture Striding male figure Egyptian 300-30 B.C. Mysterious Virgin. What made Leonardo's paintings so revolutionary was his use of light and shadow, rather than lines, to define three-dimensional objects. 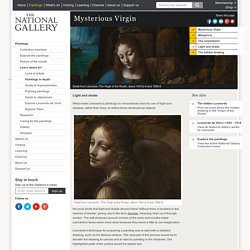 Detail from Leonardo, 'The Virgin of the Rocks', about 1491/2-9 and 1506-8 He once wrote that light and shade should blend 'without lines or borders in the manner of smoke', giving rise to the term sfumato, meaning 'seen as if through smoke'. The soft shadows around corners of the eyes and mouths make Leonardo's faces seem more alive because they leave a little to our imagination. Leonardo's technique for preparing a painting was to start with a detailed drawing, such as his famous cartoon.

The next part of the process would be to transfer the drawing to canvas and to start by painting in the shadows. The delicacy of the play between light and shadow in his pictures makes the light seem to dance across the surface of the painting. Light and Value. Umbre şi Lumini. Patru secole de pictură franceză. Secolul XVII. Lumina întunecată "Lumina, focul acesta coborât din cer pe pamânt, sursa a vietii si bucuriei, cu cine se afla în opozitie, cu umbra sau cu noaptea? 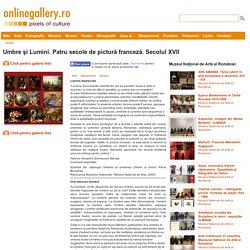