Painting in the Expanded Field 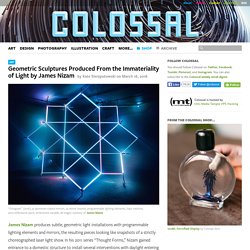 In his 2011 series “Thought Forms,” Nizam gained entrance to a domestic structure to install several interventions with daylight entering a darkened room. 50,000 Solar Powered Bulbs Illuminate the Australian Desert in Bruce Munro’s Field of Light Installation. All images courtesy of Bruce Munro Over 50,000 bulbs light up an expanse of Australia’s Red Centre desert near Ayers Rock in an installation about the size of four football fields. 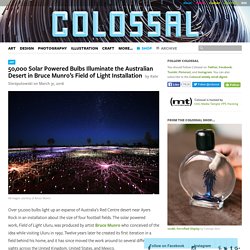 The solar powered work, Field of Light Uluru, was produced by artist Bruce Munro who conceived of the idea while visiting Uluru in 1992. Twelve years later he created its first iteration in a field behind his home, and it has since moved the work around to several different sights across the United Kingdom, United States, and Mexico. Field of Light was a project that refused to leave the artist’s sketchbook. AMY JOY WATSON. Paper Cut Light Box Fairytale Art Posters. Check out these fairytale art posters made using paper cut light boxes and inspirational idea by creative and imaginative artists Hari & Deepti! 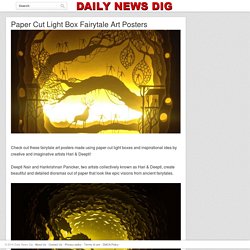 Deepti Nair and Harikrishnan Panicker, two artists collectively known as Hari & Deepti, create beautiful and detailed dioramas out of paper that look like epic visions from ancient fairytales. The basic method behind these dioramas is very simple – it is Hari & Deepti’s mastery of their craft that makes them so beautiful. Stephanie Crase - BMG ART. Collage Artwork: Collage Art by Derek Gores. 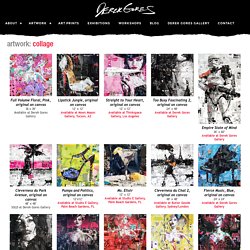 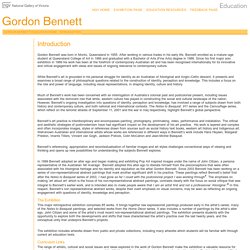 After working in various trades in his early life, Bennett enrolled as a mature–age student at Queensland College of Art in 1986 and graduated with a Bachelor of Arts (Fine Arts) degree in 1988. Since his first major solo exhibition in 1989 his work has been at the forefront of contemporary Australian art and has been recognised internationally for its innovative and critical engagement with ideas and issues of ongoing relevance to contemporary culture.

Guy Maestri. Katharina Grosse. HOSSEIN VALAMANESH : GREENAWAY ART GALLERY : ADELAIDE AUSTRALIA. My ongoing fascination with the written word is evident in this exhibition and I hope that the work here extends the conversation I started in my last show at Greenaway Art Gallery. 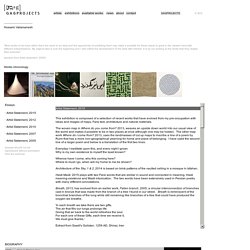 After my explorations with saffron and the word ‘love’ (eshg in Farsi / Persian) I became aware of the associations between text and colour - the yellow of madness and love. Life blood, 2010, gave me the opportunity to play with this coincidence. In Farsi text the word for blood (khun) and the casual expression for life (jun) are identical except for the position of one dot adding to the work’s ambiguity. Guardian, 2010, is a collaborative work with Angela Valamanesh, inspired by one of her earlier works history, 1993.

JENNY WATSON : GREENAWAY ART GALLERY : ADELAIDE AUSTRALIA. By chance I met Pat and Howard Frederick in 1991 when I was planning my first show in New York. 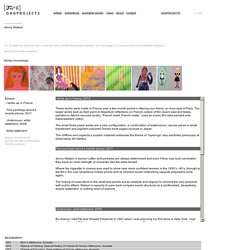 I met them in Albury, NSW, where they had been living for some years. They were about to return to the United States and invited me to come to Tucson, Arizona after my opening in New York. As a completely New York obsessed artist the rest of the USA was ‘til then a complete blur, but I took them up on their invitation. The plane descended in the vast desert with blue mountains framing the background, an old rusty steel tower with ramshackle letters announced TUCSON. I fell in love with the place immediately. The works in Undercover were made last December/January in the Tucson winter - blue skies, cold mornings, sunny days and walking from inside to outside studio spaces. Jenny Watson Brisbane September 2008. Works by Jenny Watson. Fred Tomaselli on artnet. Fred Tomaselli - Artists - James Cohan Gallery.

These chemical cocktails [embedded in the paintings] can no longer reach the brain through the bloodstream and must take a different route to altering perception. 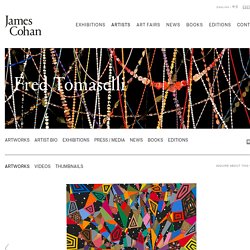 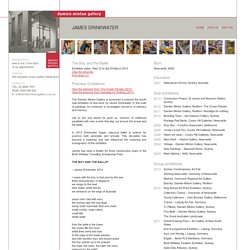 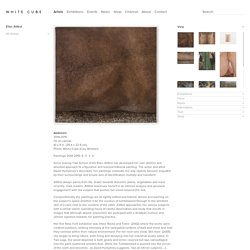 The writer and artist David Humphrey’s describes ‘her paintings celebrate the way objects become engulfed by their surroundings and simple acts of identification multiply and transform’. Altfest always paints from life, drawn towards domestic plants, vegetables and more recently, male models. Altfest immerses herself in an intense analysis and personal engagement with the subject that pushes her vision beyond the real. Compositionally the paintings are all tightly edited and framed, almost encroaching on the subject’s space whether it be the nucleus of tumbleweed through to the wrinkled skin of a cacti next to the neckline of the sitter.